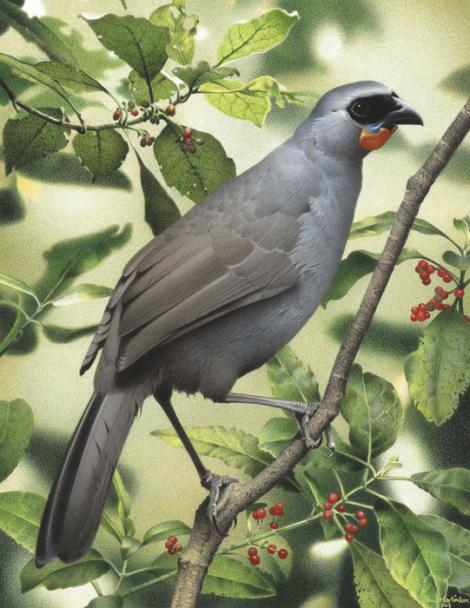 The South Island kokako was the first of the two kokako species described, the other being North Island kokako. South Island kokako were slightly smaller and darker than the North Island birds, with orange rather than blue facial wattles. In the early 1800s, they occupied beech forests and low scrub above the tree line on both sides of Southern Alps from north-west Nelson south to Fiordland, and mixed podocarp forest on Stewart Island, plus some forested areas of Otago and Southland. They declined markedly after introductions of cats, ship rats and stoats, and were very rare by the late 1800s. The range of the South Island kokako shrank to Fiordland and Stewart Island, with the last accepted twentieth century sighting at Mt Aspiring National Park in 1967. Declared extinct by the Department of Conservation in 2008, the species' conservation status was moved from extinct to data deficient in 2013, leading to acceptance of a sighting from near Reefton on the West Coast of the South Island in 2007.

The South Island kokako was one of 5 species of New Zealand wattlebirds, an endemic family that includes the living North Island kokako and saddlebacks (2 species) and the extinct huia. Genetic comparisons have revealed that the New Zealand wattlebirds share a common ancestor with satinbirds, berrypeckers and longbills of New Guinea. All have rounded wings, limited powers of sustained flight, and use bounds, hops and jumps to move around forests.

The South Island kokako was a large blue-grey bird with a black facial mask, large dark eyes, and two orange fleshy wattles at the base of the short robust slightly curved black bill. The orange wattles were blue at the base, and held compressed under the throat. They had a long, rounded tail with blackish-tipped feathers and long dark bluish-grey legs. South Island kokako bounded, hopped and ran from branch to branch and on the forest floor, interspersed with glides on short, rounded wings. They were described as being stronger flyers than North Island kokako, perhaps because their wings were slightly longer. The sexes were alike. Nestlings had rosy pink wattles that became orange with age, and a flesh coloured bill with a greenish tinge at the tip of the upper mandible.

Subfossil bones of South Island kokako are common in deposits all over the South Island. Its range was reduced by forest being replaced with open country across much of eastern South Island following Maori settlement. Kokako remained locally common in some remote areas into the 1870s but declined markedly through the 1880s until few fragmented populations remained by 1900. Most records were from the West Coast of the South Island from North-west Nelson to Fiordland, but they were also reported from Marlborough, Banks Peninsula, Arthurs Pass, Mt Cargill, Catlins, Southland and Stewart Island. South Island kokako were recorded from the coast to the tree-line in forest dominated by southern beech, southern rata, kamahi and rimu, as well as subalpine scrub.

Described as locally abundant in Dusky and Queen Charlotte Sounds, where specimens were collected by Solander and Forster on Cook’s voyages in the late 1700s, and on Mount Alexander near Arthur’s Pass by Andreas Reischek in 1873. No census data exist.

Predation by introduced mammalian predators was the main cause of extinction of the South Island kokako, with ship rats, feral cats and stoats likely to have had the greatest impact. They declined markedly after the spread of ship rats in the 1860s and stoats and weasels in the 1880s. South Island kokako were described as rapidly approaching extinction in 1889 when North Island kokako were still relatively common. It has been suggested the difference in survival rate of the two species was due to the tendency of South Island kokako to spend longer feeding on the forest floor and to nest closer to the ground than North Island kokako, making them more vulnerable to mammalian predators. Like huia, South Island kokako were described as ecologically naive. An incubating bird tolerated a close approach without giving an alarm call or defending young. Maori traditionally hunted kokako, and large numbers were killed for sale to European collectors and museums. Declared extinct by the Department of Conservation in 2008, the species' conservation status was moved from extinct to data deficient in 2013 following the acceptance of a sighting from near Reefton on the West Coast of the South Island in 2007.

South Island kokako reportedly began courtship displays in October, with the male performing an ‘archangel’ display to the female, raising and spreading his wings and tail, and bowing his head while making a gurgling noise. The nest was a massive structure in "thick scrub, not far from the ground, of twigs and moss" (Potts). A woven base of sticks and sprays supported a basin-shaped nest-bowl of twigs and sphagnum moss lined with soft grass. Two-three stone-coloured eggs (40.2 x 27.5 mm) with purplish and brown spots were laid in the lined central cup of the nest (40 cm external diameter, 20 cm internal diameter, 9 cm depth) December-January. The c.18 day incubation was undertaken by the female during December-February, with the male feeding her during courtship, incubation and brooding. The nestling period was mainly January-February, with partially downy nestlings left for periods during daytime. Young were fully grown by May. Fledged young were described as remaining with their parents until the following breeding season. It is likely that only a single brood was raised per season.

South Island kokako were likely to have been monogamous and territorial. Adult birds moved around in pairs, with the male leading. Foraging social groups of up to 7 also recorded. One record of 20 birds travelling through forest on foot together, "... Indian fashion, in single file, passing rapidly over the ground by a succession of hops, and following their leader like a flock of sheep". McLean described how they , "... used the wings much more than wilsoni [North Island kokako] and shewed a fairly good power of flight." Potts described male and female as inseparable: "male utters a very sweet whistle, consisting of six notes, as “te, to, ta, tu, tu, tu”; the call of the female is composed of five, as “te, a, tu, tu, tu..” Like other New Zealand wattlebird species, South Island kokako often held food in one foot when feeding. They defended large territories with their complex song. Kokako song is one of the slowest of any songbird species, and the duets are said to be the longest of any songbird species.

Potts, T. 1882. Out in the open: a budget of scraps of natural history, gathered in New Zealand. Reprint, Capper Press, Christchurch.

Reischek, A. 1885. Notes on the habits of some New Zealand birds. Transactions and Proceedings of the New Zealand Institute 18: 105-107.

A large songbird (probably extinct) that had a blue-grey body, striking black mask and small rich orange wattles that grew from the base of the bill, long strong legs and a long down-curved tail with blackish-tipped feathers. The sexes were alike; juveniles had rosy pink wattles and a flesh coloured bill with a greenish tinge at the tip of the upper mandible.