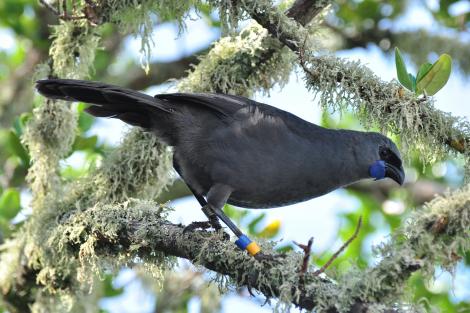 With their extraordinary haunting song, and obscure evolutionary relationships to other birds, kōkako evoke the forests of ancient New Zealand/Aotearoa perhaps more than any other species. More likely to be heard than seen, North Island kokako have persisted in small populations particularly in the central North Island from the King Country through to Te Urewera. They typically inhabit tall native forest dominated by tawa (Beilschmiedia tawa), singing from tree-tops but often feeding in understorey layers.

The North Island kokako is a large songbird with a blue-grey body, a striking black mask and small, rich blue wattles that arise from the base of the bill and sit under the throat. Typically, when seen backlit in forest, kōkako seem dark-plumaged and neither mask nor wattles are seen. They have long, strong legs and a long down-curved tail. Kōkako characteristically bound and run among branches, interspersed with glides on short, rounded wings. They are usually located by listening for song and calls. The sexes are alike; juveniles have pink or lilac wattles. A few adults have orange wattles (cf. South Island kokako).

Voice: rich, sonorous, sustained, organ-like notes are sung by both male and female North Island kokako, frequently as duet, and typically from a high perch. There is a frequent close contact call of ‘took’, repeated variably.

Similar species: tui have similar silhouette and song (especially when mimicking kokako where they coexist), but they are much smaller, darker and more adept fliers, with very different head and throat ornamentation. Vagrant black-faced cuckoo-shrike from Australia is half the size, paler grey, lacks wattles, and is a bird of open woodlands, parks and gardens rather than dense native forest.

The eleven relict North Island kokako populations are confined to scattered forests in the northern half of the North Island, particularly in the Waikato, Bay of Plenty, Te Urewera, South Auckland and Northland. Since 1981, has been successfully translocated to 14 other sites: Little Barrier, Kapiti and Tiritiri Matangi Islands, Pukaha (Wairarapa), Boundary Stream Mainland Island (Hawkes Bay), Ngapukeariki (East Cape), Ark in the Park (Waitakeres, west Auckland), Whirinaki and Otanewainuku (Bay of Plenty), Maungatautari and Pirongia (Waikato), Paraninihi and Pouiatoa (Taranaki), and Puketi (Northland). Kōkako characteristically reside in tall, diverse native forest, usually with a canopy of tawa or taraire with emergent podocarps or kauri. Kōkako have successfully bred in planted diverse shrub- and tree- hardwoods on Tiritiri Matangi Island.

The North Island kokako population has increased from c.330 pairs in 1999 to c.2080 in 2021 due to pest control at key sites, and translocation. The largest populations, with more than 100 pairs each, are in Pureora Forest, Hauturu (Little Barrier Island), Te Urewera, Mapara (Waikato), Rotoehu (near Rotorua) and Hunua Ranges. Other large populations (> 50 prs) are at Mataraua/Waima (Northland), and Kaharoa-Onaia near Rotorua, and on Kapiti Island near Wellington. Breeding pairs and unpaired singles defend 4-25 ha territories year-round by singing, which limits density.

Predation at nests by ship rats and possums is the primary cause of current declines of North Island kokako. Food reduction mainly by possums and deer, and predation by stoats are unhelpful secondary factors. All current populations must be continually managed against introduced mammal pests, either by repeated pest control on the mainland, or by vigilance against pest invasion on islands. Ship rats and possums are routinely targeted by trapping and poisoning so that their numbers are low for the duration of the breeding season (November to February). Food supply influences the number of breeding attempts that kokako make, but nest predators determine the outcomes of these attempts. Several key populations are being restored primarily by community groups. Maintenance of genetic health also influences management; e.g. new populations are established with individuals from two different source populations, totalling >40 founders. The conservation status of this species was classified Threatened - Nationally Increasing in 2021.

North Island kokako typically raise one brood during November-February, after which they moult. In occasional years of good food supply, the breeding season may last 6 months and up to three broods can be raised. Two-four pinkish-grey eggs are laid in cup nests c.13 m (range 3-25 m) up trees. Incubation is by the female alone for c.18 days. Both adults feed the nestlings. Young fledge at 32-37 days old, and so nests are vulnerable to predation for about 7 weeks. Fledged young usually remain in parents' territory for a few months, up to a year, and continue to be fed by both parents.

North Island kokako defend large territories year-round by complex singing, including the longest known duetting of any songbird in the world. They are poor fliers; they usually bound around trees with their strong legs and with small wingflaps, but may glide some hundreds of metres down gullies from treetops. Net natal dispersal is usually c.1.4 km, but juveniles travel many kilometres around local territories before settling. Kokako populations are easily isolated by forest fragmentation. The tall forests they inhabit and their alert and skulking behaviour mean that most kokako are detected by their song and other vocalisation, frequently delivered from the tops of tall trees at dawn. Birds are captured by attracting them to mist-nets with playback.

A large songbird with a blue-grey body, striking black mask and small rich blue wattles that grow from the base of the bill, long strong legs and a long down-curved tail. The sexes are alike; juveniles have pink or lilac wattles.

Song and call (goldfinch in background)