Geographical variation: Three subspecies breed in different parts of Australia. Two of these are identical in plumage but vary in measurements. A third subspecies from central and north-western Western Australia, has generally paler colouring in the grey areas of its plumage, and an almost whitish belly. The subspecific identity of the birds seen in New Zealand is unknown. 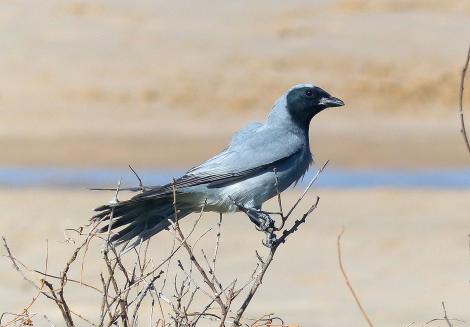 One of the characteristic behaviours of the larger species of cuckoo-shrike, is that when landing on a perch, they re-arrange their wings a number of times. Due to this habit, the black-faced cuckoo-shrike is often called the shufflewing. Neither cuckoos nor shrikes, the undulating flight of these birds can resemble that of some cuckoos, and the predominantly grey plumage of many cuckoo-shrikes resembles such species as the common cuckoo of Europe, Asia and Africa. The shrike part of the name comes from the bill shape, which is similar to that of the Old-World shrike family.

As one of the more regularly seen native birds in such Australian cities as Perth and Sydney, the black-faced cuckoo-shrike should be a familiar bird to many Australians. With a compound name comprising four parts, it is, unsurprisingly, one that not many people know how to label.

The black-faced cuckoo-shrike is a medium-large slender blue-grey songbird with a prominent black face and throat in adult plumage. Immature birds have a significantly reduced area of black, largely confined to the region between the beak and the ear-coverts, appearing as a smudgy bandit mask. Cuckoo-shrikes have a distinctive flight behaviour; after a few flaps of their wings, they hold their wings close to their body for a second or two, resulting in a loss of altitude before flapping again. This creates the cuckoo-like undulating flight pattern. Black-faced cuckoo-shrikes also hover, including whilst gleaning invertebrates from the leaves of trees.

Voice: a liquid, pleasant, churring chereer, either singly or in a rolling sequence; also a flute-like call; a purring; and a harsh shrilunk.

Within Australia, the black-faced cuckoo-shrike is widely distributed as a breeding bird, but avoids sandy deserts and rainforests. Its strongholds are in the wooded south-east and coastal parts of Western Australia. It is a common suburban bird, and frequently perches on television aerials and telegraph wires. Movement of the birds in the non-breeding season is complex and incompletely understood, with some populations migrating as far north as the Solomon Islands, New Guinea and Indonesia, whilst other populations are apparently resident or sedentary. Before migrating, flocks of well over one hundred birds can assemble.

More than 20 records from widely scattered parts of New Zealand, including Stewart and Kapiti Islands, from most months of the year. A bird seen at North Kaipara Head in 1953 was apparently a long-stayer, being recorded over a six-month-long period.

Black-faced cuckoo-shrikes may be faithful to one mate over a period of several years, and will use the same territory for a number of years. Both male and female birds construct the nest, incubate the eggs, and care for the young. The nest is a shallow cup of sticks, grass and bark, bound together by cobwebs, and often constructed on the fork of a branch. Apart from the re-arranging of wings that generally happens when birds land, there is also a display where birds extend their necks, and emit a harsh “caw” whilst alternately lifting their left and right wings a number of times.

Black-faced cuckoo-shrikes eat insects, including caterpillars, and other invertebrates, also some fruit and seeds. They take food on the wing or on the ground, but primarily feed by foraging through foliage. No New Zealand data.

Pizzey, G. 2007. The field guide to the birds of Australia. (8th edition). HarperCollins.

A medium-large slender songbird with a black face and throat, blue-grey above, grading from grey to pale-creamy white below, black bill and eyes, and dark grey legs. Immature birds have a significantly reduced area of black, largely confined to the region between the beak and the ear-coverts, appearing as a smudgy bandit mask.