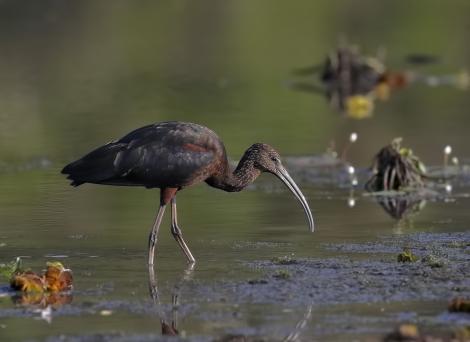 With its large size, dark plumage and strongly down-curved bill, the glossy ibis is unlikely to be confused with any other bird that occurs in New Zealand. A few reach New Zealand most years, where they are mainly seen in wetlands, estuaries and damp pasture. Although usually seen singly, pairs and flocks of up to 24 birds are also occasionally seen.

Similar species: straw-necked ibis has white underparts and (as adult) straw-like neck plumes. Eastern curlew is of similar size and bill shape, but is mottled brown.

The glossy ibis is widely distributed throughout most warm temperate and tropical regions of the world. It is common throughout much of southern Europe, Asia, Africa, Australia, and the Atlantic and Caribbean region of the Americas. Its preferred habitat is areas of shallow freshwater or brackish wetlands with tall dense stands of emergent vegetation such as reeds, papyrus or rushes, and low trees or bushes. They also occur in coastal areas and open grassland. Most glossy ibises in New Zealand have been seen in damp rough pasture, the margins of freshwater lakes, and in estuaries. They may form large flocks and congregate in communal roost sites. Currently, it is not listed as threatened by the IUCN but there are alerts to the threats of wetland habitat degradation and loss through drainage, irrigation and invasion by exotic plants.

The glossy ibis is a frequent vagrant to New Zealand. There have been at least 50 records, mostly of single birds, since the first sighting at Washdyke Lagoon (Timaru) in 1902. Small flocks arrived in 1953 (three flocks of 14, 18 & 24 birds), 1968 (3), 1975 (4) and 1988 (6 & 7). In recent years there has been a bird present every winter at Travis Wetland and nearby Bexley Wetlands, Christchurch (1999-2014), and 1-2 birds have been seen regularly at Unahi (Northland), Ohiwa (Bay of Plenty), and Manawatu Estuary, with up to 5 at Wairau Lagoons (Blenheim). There are two records from Stewart Islands, and one reached Chatham Island in December 1984. The first reported breeding in New Zealand was a pair on a nest at Wainono Lagoon, South Canterbury, in January 2015. Three young fledged from a second site (Wairau Lagoons, Blenheim) in December 2015.

The first New Zealand breeding record was a single pair among a royal spoonbill colony. Elsewhere it is a communal breeder, and also congregates in migrating flocks outside the breeding season. The glossy ibis rarely calls, but when breeding it emits croaks and grunts, including a hoarse “grrrr”. It is an active predator that hunts with a probing action of its long downward-curved bill.

Prey items depend on the season and location, and include a variety of invertebrates, and occasionally fish, amphibians, lizards, small snakes and nestling birds.

A large heron-sized wading bird with a long down-curved bill and dark brown plumage with glossy green iridescence. In breeding condition, adults have blue facial skin patches rather than the greyish blue patches of non-breeding birds.