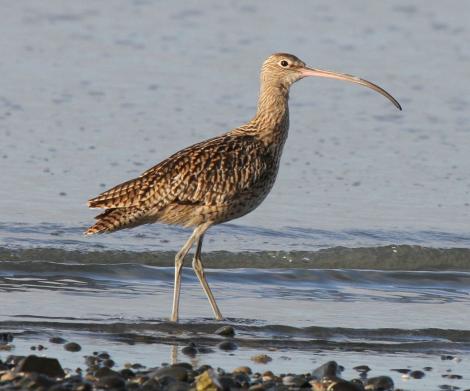 The eastern curlew is the largest wader in New Zealand, and has the longest bill of any wader at around 20 cm in length. It is a regular summer visitor to New Zealand but now in very small numbers, with probably fewer than 10 each summer since the mid 2000’s, and usually at only a handful of sites. The eastern curlew is confined to the East Asian-Australasian Flyway (EAAF), with a global population estimated to be c.20,000 and declining.

The eastern curlew is an enormous wader with very long heavily decurved bill. The head and neck are streaked dark-brown, there is a thin white eye-ring, and the chin and throat are whitish. The upperparts are brown with pale olive-brown edging, the rump is brown, and the tail is greyish-brown with narrow dark banding. The underparts are dark brownish-buff, paler towards the vent, with fine dark-brown streaking turning to thicker arrow-shaped streaks on the flanks. The underwings are whitish, but appear darker due to the fine dark barring. The sexes are alike (apart from females being larger with longer bills); juveniles are similar, but with with back feathers neatly edged and notched with white, and with finer streaks on the underparts.

Similar species: in the New Zealand region only whimbrel and bristle-thighed curlew are possible confusion species. Both are smaller with shorter decurved bills and boldly streaked crowns. Eurasian curlew has occurred once in Australia and is distinguished by its extensive white rump and lower back and whiter underparts.

Eastern curlews breed in marshy, boggy habitat in eastern Mongolia, north-east China and eastern Siberia. In the non-breeding season they are mainly found on mudflats in northern and eastern Australia. In New Zealand, curlews are found in small numbers on major harbours and estuaries from Parengarenga in the Far North to Awarua Bay in Southland, with strongholds at Manukau Harbour and Farewell Spit. They have been recorded as vagrants on North Meyer Island (Kermadec Islands), and on Chatham, Stewart and Campbell Islands.

The global population of eastern curlews was estimated at 38,000 in 2006 but is known to be declining. Based on winter counts in Australia, the population is now likely to number around 20,000. Annual declines between 1992 and 2008 averaged 2.4% in Moreton Bay, Queensland, a wintering stronghold. Numbers in New Zealand were regularly in the mid 40s during the 1980s but now fewer than 10 occur annually, with only 1 or 2 overwintering.

Eastern curlews are classed as Endangered by IUCN. Like most waders migrating along the EAAF, particularly for those using coastal wetlands in China and Korea, they are under serious threat from staging habitat loss, due mostly to reclamation and human based development and disturbance. Breeding grounds and most wintering sites are probably more secure although hunting and other disturbance maybe a factor on the breeding grounds, particularly in Russia. Human disturbance at southern wintering grounds in Australia are also of concern. Curlews are more susceptible to disturbance than most waders.

Eastern curlews breed from early May to late June. Nests typically contain 4 eggs and are placed on small mounds in swampy ground. Incubation is shared by both sexes. Chicks leave the nest soon after hatching and feed themselves on insects and other small invertebrates.

The eastern curlew is a long distance migrant, making non-stop flights from east and north Australia direct to east Asia, from Taiwan northwards to major mudflat staging sites of the Yellow Sea. From there, the curlews fly directly to their breeding grounds. Southward migration follows a similar route and legs. They reach New Zealand from September to November and leave in March and April. Eastern curlews are very wary birds, and are difficult to approach. In New Zealand they may be solitary, associate with other curlews, or join with bar-tailed godwits.

No birds banded overseas have been seen in New Zealand and none has been banded here.

Eastern curlews mainly eat crabs and small molluscs on the non-breeding grounds. They usually break crabs legs off first before swallowing the legs and body. No New Zealand data.

A very large bulky wader with a very long heavily decurved bill, head and neck streaked dark brown, thin white eye-rings, and whitish throat. The upperparts are brown with pale olive-brown edging and the underparts are dark brownish-buff, paler towards the vent, with fine streaking grading to thicker arrow-shaped streaks on the flanks.