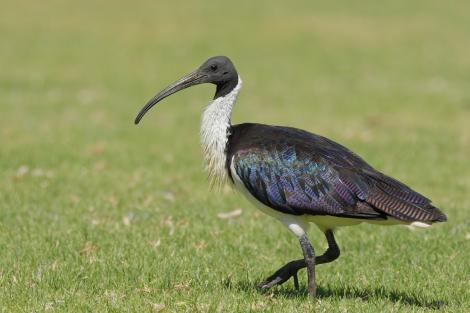 Three species of ibis have been recorded in New Zealand, all of which are presumed to have flown from Australia, where they are common. Flooding and bush fires are the most likely conditions responsible for this movement to New Zealand. The straw-necked ibis is the rarest of the three species, with only one record to date, in Central Otago in 2009. In Australia, straw-necked ibises are often seen flying in V-formation over parklands, wetlands and fields, where they have adapted well to urban developments. They nest in colonies, often with other wetland bird species.

Straw-necked ibises are medium-sized birds about the size of a heron. They have a long, black down-curved bill. The wings and mantle are dark with a glossy sheen. The neck feathers are white and appear straw-like. The underbelly and tail areas are white. The legs are dull reddish near the top and black lower down, and the head is bare and is also black. They are likely to be confused only with the similarly sized Australian white ibis and the glossy ibis, which differ substantially in their overall coloration. Immature birds are duller in colour and lack the glossy sheen on the wings as well as the feathering on the neck.

Vagrant. One record of a single bird recorded at Tarras, Central Otago during Jan-Feb 2009.

Colonial nester in reed beds, on trampled vegetation, on islands or on trees overhanging water. The nest is cup-shaped and made of a pile of sticks with some plant lining. Both parents share in nest-building, incubation and feeding of young.

Usually occurs in flocks in open habitat such as grasslands, parks, fields and irrigation channels where they probe the ground for invertebrates such as grasshoppers, crickets and locusts. Straw-necked ibises breed in colonies, often with other ibis and waterbird species.

A wide variety of foods are eaten including grasshoppers, locusts, lizards, frogs and aquatic insects.

A medium-sized wading bird with a bare black head, a long, heavy, down-curved black bill, and white, straw-like neck feathers. The wings are dark and glossy, the underbelly and tail are white, and the long legs are dull reddish grading to black.

Grunts when disturbed while feeding