Geographical variation: Up to five subspecies, with the eastern form variegatus the only form reported from New Zealand. Often considered conspecific with American whimbrel (Numenius hudsonicus) 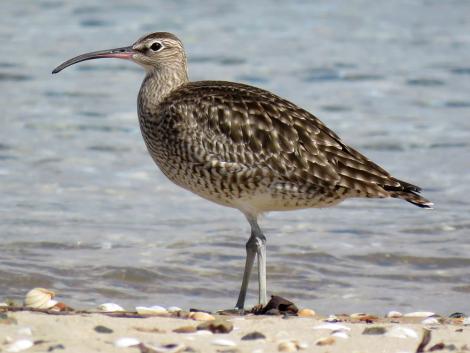 Whimbrels are large shorebirds which migrate to New Zealand from Arctic breeding grounds in small numbers. Most records are during the summer but a few birds occasionally overwinter. In New Zealand they typically associate with bar-tailed godwits, from which they differ in being darker, having a striped head and a strongly down-curved bill.

Whimbrels are somewhat larger than bar-tailed godwits and recognisable by their down-curved bill and pale stripe down the centre of crown. They are mottled dark brown above, pale below, with much brown streaking on the throat and breast. The head is conspicuously striped, with a pale eyebrow stripe separating the dark eye-stripe and side-crown, and another pale stripe down the centre of the crown. The rump and back pattern is very variable, ranging from largely white with some brown mottling, to heavily streaked brown appearing almost all dark at a distance. Most (possibly all) New Zealand birds are of the Eurasian species, and typically have a pale blaze up the back visible in flight. However, separation of Eurasian and American whimbrels on rump pattern is unreliable as some Eurasian birds from Siberia have completely dark rumps. The underwing pattern of any ‘dark-rumped’ whimbrel should be checked; both forms reported from New Zealand have underwngs heavily barred with brown, but American birds have a cinnamon-buff toned underwing (similar to bristle-thighed curlew) while Asiatic birds have a more greyish tone.

Similar species: eastern curlew is larger with proportionately much longer bill and no crown stripe. Little whimbrel has crown stripe but bill is finer and only slightly down curved. Bristle-thighed curlew is similar in size and structure but has overall cinnamon-buff colouration, a plain (unbarred) orange-buff rump, and a very different call. American whimbrel is almost identical, but always has a dark back, and has underwing with buff tones under the barring (cf. grey in Eurasian whimbrel).

Eurasian whimbrels may occur on estuaries throughout New Zealand, but most records are from the northern half of the North Island and Farewell Spit.

About 70 Eurasian whimbrels occur in New Zealand annually. The East Asian-Australasian Flyway population is estimated at 55,000. Numbers are thought to be declining. Eurasian whimbrels have been recorded as vagrant at the Kermadec, Chatham, and Auckland Islands.

About 50% of the East Asian-Australasian Flyway Eurasian whimbrel population stages in the Yellow Sea on northward migration – an area under severe threat from reclamation and pollution.

Eurasian whimbrels breed on Arctic tundra across Eurasia. A clutch of 4 eggs is laid in a shallow scrape lined with small bits of vegetation.

In the non-breeding season Eurasian whimbrels feed on a wide range of estuarine invertebrates including worms but particularly crabs. They also take small fish.

A large wader with a medium-sized dark decurved bill, a pale stripe on the centre of the crown, and a pale eyebrow stripe separating the dark eye-stripe and side-crown. The upperparts are mottled dark brown contrasting pale underparts with brown streaking on the throat and breast, and the rump and back pattern is highly variable.

American whimbrel call on take off