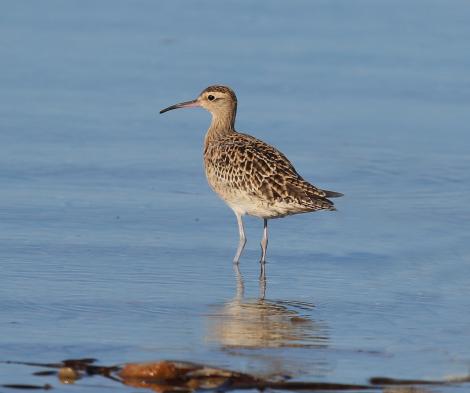 The little whimbrel (or little curlew) is the smallest of the world’s curlews. It breeds in northern central Siberia, and the bulk of the population spends the non-breeding season in northern Australia, with occasional birds reaching New Zealand. It is a bird of dry grasslands more than mudflats. In New Zealand, little whimbrels are often found in the same dry saltmarsh habitat as Pacific golden plovers, though not generally closely associated with the plovers. As most bird-watchers focus their attention on the large flocks of waders that assemble on mudflats and their high tide roosts, it is likely that many little whimbrels escape detection in New Zealand.

The little whimbrel is a medium-sized shorebird with a long neck, small head, upright stance, and long usually blue-grey legs. The first impression is of a miniature whimbrel with a shorter bill, and it is easy to see that it is related to other Numenius species. The little whimbrel is slightly larger than a Pacific golden plover, and noticeably smaller than a whimbrel or bar-tailed godwit. It has similar bold crown and supercilliary stripes to the whimbrel. The little whimbrel’s slightly decurved bill is 40-50 mm long and mostly dark, but the base of the lower mandible is pinkish. It is longer and finer than for golden plover (and is decurved), but is much shorter and straighter than for whimbrel. The little whimbrel's upperparts are blackish and brown, fringed and notched with buff. The underparts are whitish buff.

Similar species: The once numerous, and very similar, eskimo curlew is probably extinct, and was never recorded in NZ, it was slightly larger and had cinnamon wing linings. Bristle-thighed curlew and whimbrel are much larger with much longer, more decurved bills. Upland sandpiper lacks the bold head stripes of little whimbrel and has a shorter, straight, yellow bill, yellow legs, and a much longer tail.

Little whimbrels breed in north and east Siberia. The majority of the population migrates in the northern autumn to the northern states of Australia, where it prefers short grassland. It is rated “least concern” by IUCN.

Little whimbrels (usually a single bird) occur in New Zealand every year or two, where they have been seen on short grass or salt marsh, but also associating with godwits on tidal flats. Given their preference for grass it seems likely that others have come to New Zealand without being noticed. Those seen with godwits on tidal mudflats at Miranda have seemed unsettled and stayed for hours or less, rather than days.

The first record for New Zealand was two birds at Lake Ellesmere in June 1900, followed by birds at the same site in March 1921, 1922 & 1935, before the first North Island bird at Napier in 1952. Lake Ellesmere has continued to be a hot-spot for little whimbrel sightings, along with Manukau Harbour and Miranda. More exceptional were records from Browns Island, Hauraki Gulf (October 1996) and Nine Mile Beach, Charleston (September 2010).

Little whimbrels that migrate to northern Australia gather in flocks, sometimes of thousands, mostly in short, dry grasslands near fresh water, and marshes with short vegetation. They are often seen on mown grass such as sports fields and airfields. Flocks are very mobile and turn up unexpectedly, depending on grassland condition, rain etc.

A vagrant little whimbrel observed on Norfolk Island for five consecutive mornings December 2004 - January 05, was always with Pacific golden plovers on grass [Kingston Common], and never with two whimbrels on a nearby mud, rock and sand beach a few metres away. That bird was seen to squat when startled.

Little whimbrels eat small insects from ant-size to crickets and grasshoppers, but also some seeds. They feed by picking or short probing, and will also bury their bill fully.

A medium-sized wader with a relatively small head and short decurved bill, and a relatively long neck and blue-grey legs. It has similar bold crown and supercilliary stripes to the whimbrel with blackish and brown upperparts fringed and notched with buff and whitish buff underparts.