Geographical variation: The subspecies rineyi was proposed for birds found in Fiordland, but is not currently recognised. Variation in rock wren throughout their range is under investigation. 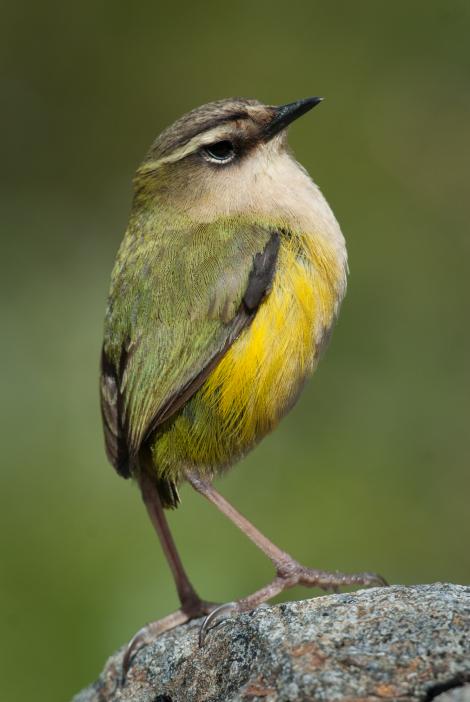 The rock wren is a small, ground-feeding subpasserine found in the Southern Alps of the South Island. It remains above the bush line throughout its life and is the only truly alpine bird in New Zealand. The New Zealand wrens (Family Acanthisittidae) are an ancient and endemic lineage that up until 1000 years ago included 7 species in 5 genera. Only the rock wren and the rifleman survive. The rock wren has a disjunct distribution because of its preferred habitat of alpine basins and its habit of hole-nesting on the ground leads to predation by mice and stoats. These characteristics make the species vulnerable to local extinctions.

The rock wren is a small, alpine bird with short tail, rounded wings and long legs and toes. The male is dull green above and grey-brown below with yellow flanks. Pale tips to the secondary feathers usually form a row of pale spots on the lower back when perched. The female is slightly plainer, mainly olive-brown. Rock wrens bob vigorously along with wing flicks, and usually hop and run rather than flying.

Similar species: the rifleman is similar but the habitat of each is unlikely to overlap. The rock wren is larger and has a shorter and straighter bill. The bush wren (considered extinct since 1972) was very similar to rock wren but was darker underneath (contrasting with a paler chin), and lacked pale tips to the secondaries.

Rock wrens are widely but patchily distributed through alpine and sub-alpine areas of the South Island. They are most common within the Southern Alps from Fiordland, through South Westland, and Mt Aspiring and Mt Cook National Parks. Localised populations exist further north in Arthur's Pass, Nelson Lakes and Kahurangi National Parks. Rock wrens are less abundant and even more localised in the Eyre Mountains, and parts of inland Canterbury and the Victoria Range. Many of these locations are seemingly disjunct from other rock wren populations. They are found from 900 m to 2500 m in altitude where the habitat may vary from dense sub-alpine scrub, through talus where stable rock falls are interspersed with low shrubbery to bare rock in very exposed situations. Rock wrens are no longer present in the Kaikoura Mountains and have never been confirmed from Stewart Island, the Takitimu Mountains and the Paparoa Range.

Rock wren were transferred successfully to Secretary Island in Fiordland in 2008-10.

Stoats and mice are known to prey on the contents of rock wren nests. There is little information on how frequently this occurs and whether the intensity of predation varies between years dependent on changes in tussock seeding, which affects mouse (and therefore stoat) population densities. During the 2012-13 summer a study in the upper Hollyford showed that most nests were preyed on by stoats. Changes in distribution and the frequency of sightings suggest that rock wren are declining. At present all rock wren habitat is above the altitudinal limit for ship rats but this may change with global warming, and cause an increase in predation. The conservation of this species was changed from nationally vulnerable to nationally endangered in 2013.

Rock wrens breed in spring and summer. A thickly lined and fully enclosed nest is constructed at ground level within a natural cavity. The average clutch size is 3, with only one brood reared in a season. Both adults incubate the eggs and care for the young.

Rock wren typically spend most time hopping and flitting through the alpine boulder fields they inhabit, calling intermittently to others. Foraging birds will occasionally disappear amongst large rocks or into the surrounding dense alpine shrubbery. When stationary the bird bobs up and down, often with flicking wings. Flights are short and close to the ground. This behaviour suggests a sedentary species with poor dispersal ability and yet there have been occasional records in previously uninhabited alpine areas and in valley floors. Birds are known to over-winter in the alpine zone. One banded bird survived for 5 years. Rock wrens often have an anklet of dead skin around one or both legs.

A very small alpine bird with short tail, rounded wings and long legs and toes. The male is dull green above and grey-brown below with yellow flanks, and the female is slightly plainer, mainly olive-brown.

Probable fledgling calls and being fed and a few adult calls

Probable fledgling calls and being fed and a few adult calls