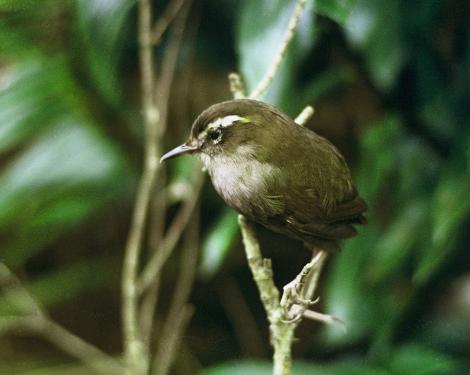 The bush wren vies with the South Island kokako for the unfortunate distinction of being the last New Zealand bird to become extinct – in or soon after 1972. All three subspecies are thought to have become extinct within 20 years of each other due to predation by rats and (probably) stoats.

The bush wren was one of seven recent species in the New Zealand wren family, which was the first (or most ancient) branch within the enormously diverse order of songbirds. Two members only of the family survive – rifleman and rock wren. The latter is the closest relative of the bush wren, and the two species were very similar in appearance and behaviour.

The bush wren was a very small, short-tailed perching bird that rarely flew. The head and back were olive-green or brown, darker on the head, often with a distinct brown cap contrasting with the greener back. A white eyebrow stripe was usually prominent, though reduced or absent in some Stewart Island birds. The underparts were slate grey, contrasting with the pale chin and dull yellow on the flanks. The female was browner than the male. Stewart Island birds were more variable in plumage, ranging from green to brown on the back. North Island birds were reported to have slate blue on sides of neck and chest, and brighter yellow flanks. All forms had long legs and toes.  As for the similar rock wren, bush wrens often bobbed when otherwise stationary.

Similar species: bush wrens were larger and darker than rifleman, with much longer legs (rifleman also has a diagnostic upturned bill). The very similar rock wren differs in being paler underneath, without contrast between chin and breast. The cap of the rock wren usually contrasts less with the browner back plumage. Rock wren also has pale tips to the secondary feathers, forming a row of pale spots on lower back when perched (lacking in bush wren).

Bush wrens were formerly found in forest and scrub in mountainous areas in the North and South Islands, plus Kapiti Island, Stewart Island and the three nearby South Cape islands (Taukihepa/Big South Cape Island, Rerewhakaupoko/Solomon Island and Pukeweka). They were probably throughout in suitable habitat, but there were few recorded locations in the North Island in historic times (the few records included Urewera, Lake Taupo, Rimutaka Range, and Days Bay). Bush wrens were predominantly recorded from beech forest and subalpine shrubland in the South Island, podocarp forest in Fiordland and on Stewart Island, and muttonbird scrub (low tree daisy forest) on islands off Stewart Island.

Bush wrens are almost certainly extinct. The last recorded sightings were from the North Island in 1955 (Lake Waikaremoana), the South Island in 1968 (Moss Pass, Nelson Lakes; also Arthur’s Pass in 1966 and Milford Sound in 1965), Stewart Island in 1951 (near Halfmoon Bay), and Taukihepa in 1964.

Bush wrens were rapidly extirpated by ship rats on Taukihepa, Rerewhakaupoko and Pukeweka Islands in 1964. Rodents (Pacific rat first, then Norway rat, and finally ship rat) were probably the main cause of decline of bush wren in the North and South Islands and Stewart Island, with stoats likely to have contributed to declines and eventual extinction in the North and South Islands after their deliberate introductions in the 1880s.

Six bush wrens were translocated from Taukihepa to nearby Kaimohu Island by the Wildlife Service in 1964, in a desperate rescue attempt following the invasion and irruption of ship rats on the South Cape islands. Two birds were seen on Kaimohu Island in 1972 – the last accepted sighting of bush wren.

Bush wrens constructed spherical nests with the entrance at the side near the top. Nests were strongly constructed with fern rootlets, moss and leaves and lined with feathers of other birds. Nests were well concealed in holes in trees or logs, among tree roots, fern clumps or in banks, often close to the ground. Nests were often in damp sites, and birds would replace the feather lining after rain. Two (sometimes 3) eggs were laid in November or December, incubation and chick care were shared. Eggs were ovoid, white, 18 x 13.2 mm (X. l. longipes, South Island), 21 x 15.5 mm (X. l. variabilis, Rerewhakaupoko).

Bush wrens were encountered as pairs or small family groups, and were territorial when breeding. On the mainland they were reported to feed among branches, cf. rifleman feeding on trunks. On islands off Stewart Island, bush wrens kept among low dense vegetation, and spent much time on the ground, including entering petrel burrows. Their movements were restless, swift and furtive. Flights were short and direct. Bush wrens often bobbed on landing, either the whole body or just the head.

A very small short-tailed perching bird with long feet and toes, olive-green or brown head and back, white eyebrow stripe, slate grey underparts contrasting with pale chin and dull yellow on the flanks. It often bobbed when otherwise stationary and the female was browner than the male.