Geographical variation: There are 3 sub-species. New Zealand birds are all likely to be A.i. plumifera 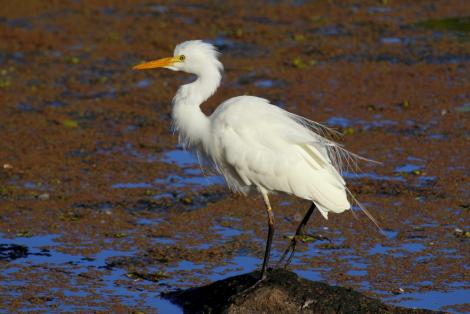 The plumed egret is a medium-sized all-white egret with a relatively short, stout yellow bill. The bill turns reddish in breeding plumage. The neck is about the same length as the body, and typically held in an 'S'-shaped curve. When breeding, plumed egrets acquire long filamentous plumes from scapulars and breast, and green facial skin. The long legs are generally dark.

Similar species: eight species of mainly white egrets, herons, ibises and spoonbills have been recorded in New Zealand. All are sometimes seen on their own, making size estimation difficult. Other field marks should be added to impression of size, for separation, particularly from little egret and white heron.

The white ibis and both species of spoonbill have very different bill shapes from egrets and should be easily separated. Royal spoonbill, which has a black bill, is the only common species among this group.

Cattle egret in non-breeding plumage is all white with a yellow bill, but is much smaller and more stocky with shorter neck and legs. Long feathers under the bill give a “jowly” appearance. The white morph reef heron has been recorded at least once in New Zealand. It has a more hunched, horizontal stance and dark grey bill. The reef heron is strictly marine and usually seen on rocky shorelines. In contrast, the plumed egret is most often seen inland around fresh water.

Little egret and white heron, like plumed egret acquire filamentous plumes from the breast and scapulars in breeding plumage. The little egret is smaller with a long, black bill which is much finer than in the plumed egret, with only traces of yellow. Little egrets in New Zealand will have some yellow on their feet, even if only on the underside. They are typically more active and erratic than plumed egrets which by comparison are slow and graceful when feeding. The white heron is bigger and has a longer neck that is 1.5 times its body length, with a more sharply kinked 'S' shape than plumed. A diagnostic field mark separating these two species is that the gape line on white herons goes back beyond the eye, but on plumed egrets it stops level with the back of the eye.

Plumed egrets are widespread and common through much of Africa, Asia and Australia, mainly occurring in freshwater wetlands. This contrasts with little egret (especially) and white heron, which are more often seen in estuaries. Ironically, the first New Zealand record was at Manawatu Estuary (1973).

Plumed egrets have been recorded in New Zealand at least 18 times, with several more unconfirmed sightings.  They have been seen from Kaikohe south to Lake Ellesmere, and from Cobden (West Coast) to Hawke’s Bay, with 4 records from the wetlands of the lower Waikato River. The most recent record was one at Tomahawk Lagoon, Dunedin, in November 2014.

A medium-sized all-white egret with a relatively short, stout yellow bill that turns reddish in breeding condition. The neck is about the same length as the body, the long legs are generally dark and the gape line stops level with the back of the eye.

Display at nest in heronry