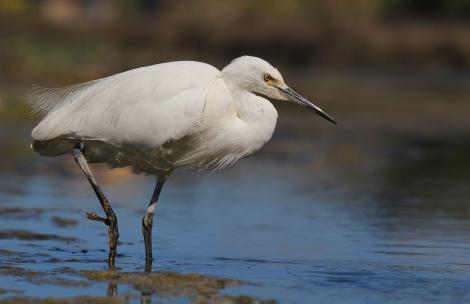 The little egret is a small, hyperactive ‘white heron’ with a slender black bill. First recorded from New Zealand in 1944, there are 2-3 little egrets present here most years, with single birds often staying at the same site for many consecutive years.

The little egret is a small entirely white heron, with yellow facial skin and a rapier-like black bill. Its legs and bill are black, with yellow soles to its long toes. In breeding plumage, a pair of long, slender plumes grow from the back of the head, curving elegantly down to the back, and filamentous plumes develop on the lower back and breast. The facial skin turns bright red or blue when breeding, but this has not been reported in New Zealand. Juvenile birds have greenish-black legs and duller yellow feet.

The little egret is widely distributed throughout the tropical and warm temperate regions of Europe, Africa, Asia, and Australia. It is reasonably common in most states of Australia but is listed as threatened in Victoria. The main threats to little egrets elsewhere are from coastal reclamation and wetland draining, especially in its feeding and breeding areas of Asia. In New Zealand, little egrets occur almost exclusively in estuarine habitats.

Little egrets are scarce annual migrants to New Zealand, arriving in autumn and departing in early spring, with some individuals remaining over summer. They are usually seen as single birds, with the largest New Zealand flock being five birds. The first New Zealand record was a bird initially thought to be a white morph reef heron, at Wairau Rivermouth in 1944-45. Little egrets have subsequently been seen throughout the country, from the Three Kings Islands and Parengarenga Harbour to Bluff. One or two birds have long been resident at the Clive wetlands in Hawke’s Bay, which is the most reliable place in New Zealand to view this scarce species. There was a minor influx in 2013-14, with birds seen at numerous locations from Northland to Southland.

Little egrets are generally solitary in New Zealand, frequenting coastal areas in preference to freshwater wetlands. There are no breeding records from New Zealand. In countries where it does breed it is usually a silent species except for croaking and bubbling calls that are made at breeding colonies. It does have a harsh alarm call when disturbed. It is an active predator that hunts its prey using a variety of methods.They use stealth to either stalk their prey in shallow water or wait in ambush. They also run through the water with raised wings to disturb small fish and invertebrates.

A small white heron with yellow facial skin and a long pointed black bill, black bill and legs with yellow soles to its long toes. In flight, it retracts its neck into the body and has slow wing-beats.