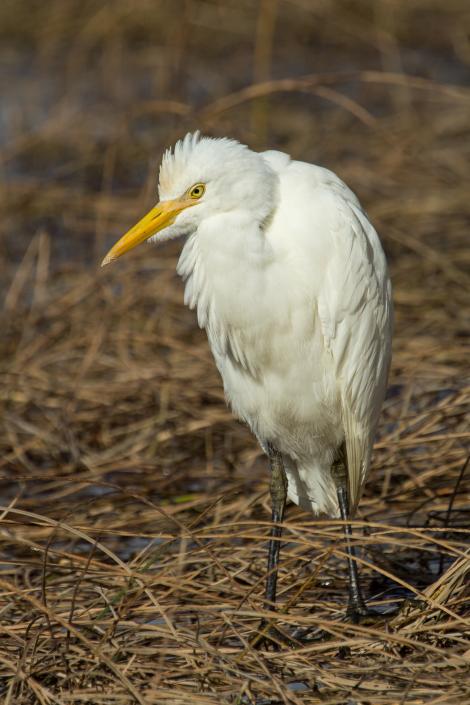 The cattle egret is a widely but patchily distributed Australian migrant, reaching New Zealand in variable numbers each autumn to overwinter. It is generally found associating with cattle and sheep.

A small, stocky egret, similar in size to a white-faced heron, but not as slim and with a shorter neck. When standing, cattle egrets typically have a rather hunched posture, and when feeding they have a jerky walking action. Non-breeding plumage is entirely white, with a stout, slightly decurved yellow bill, yellow facial skin and grey legs. There is a distinctive jowl of feathers under the lower mandible. In breeding plumage there are extensive areas of ginger on the crown, neck and mantle, and long plumes on the neck and back; the legs become yellow and the bill is reddish. Birds recently arrived in New Zealand often have varying traces of breeding plumage remaining, and many colour-up prior to departure in the spring.

Voice: normally silent, except during breeding and at roosts, when various croaking and chattering calls are made.

Similar species: this is the smallest egret occurring in New Zealand. All other egret species are larger and slimmer, with a longer neck. The little egret is slightly larger, and has black legs and feet with yellow soles; juveniles have some yellow on the long slender bill, but it is still mainly black. Plumed egret and white heron (kotuku) are much larger, with longer bills, and much longer necks. Can also be confused with distant flocks of sulphur-crested cockatoos.

Originally found in Africa, southern Europe, and Asia south of the Himalayas, the cattle egret’s range expanded considerably during the 20th century to South, Central and North America as far as southern Canada. They arrived in Australia in 1948, and were first recorded in New Zealand in 1963.Cattle egrets can be found over much of lowland New Zealand. Flocks are loyal to particular areas in successive years. They are more widespread soon after arriving in autumn, but birds tend to congregate in preferred areas as winter progresses. Favoured sites include Kaipara Harbour, Rangiriri (Waikato), Lake Ellesmere (Canterbury), Tasman Bay, and Inch Clutha (Otago). They are predominantly found in damp pasture, and associate with cattle and, to a lesser extent, sheep.

Following the first Canterbury records in 1963, increasing numbers arrived in autumn over subsequent years, peaking in the late 1980s at over 3200 birds. The wintering population has declined fairly steadily since then, mirroring a fall in breeding numbers in Australia. They usually occur in small flocks, though occasionally in excess of 100 birds.

Not considered globally threatened, but the reduced population in Australia is causing some concern.

Cattle egrets are monogamous and breed colonially, frequently with other egrets and herons, nesting in small trees, often near water. Up to 7 (but normally 2-4) eggs laid in unlined nest of twigs and small branches. Not confirmed to have bred in New Zealand.

Cattle egrets feed in association with stock, hunting prey that is disturbed by cattle and sheep. They are often found alongside white-faced herons, and occasionally perch on the backs of stock. In New Zealand they are wary of humans, but are often habituated to humans and approachable elsewhere in their range. They frequently fly short distances within or between paddocks, and prefer to roost in macrocarpas or other large trees.

Birds tagged in Australia have been seen in New Zealand on at least two occasions. Although none has been proven to make the return journey, it is assumed that most birds go back to Australia after overwintering. A few birds spend the summer in New Zealand

The main food in New Zealand is earthworms, but also grass grubs and moth larvae.

A small, stocky, white egret with a slightly decurved yellow bill, yellow facial skin and grey legs in non-breeding condition. In breeding condition it has a ginger-orange crown, neck and mantle, long white plumes on the neck and back, yellow legs and a reddish bill.

Range of calls at nesting colony