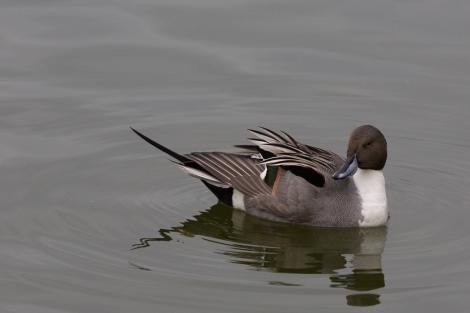 The northern pintail is a dabbling duck that is smaller and slimmer than the ubiquitous mallard. Its English and scientific names describe the two long black central tail feathers of the drake in breeding plumage. The northern pintail inhabits open, shallow wetlands, breeding across the northern parts of Europe, Asia and North America. It is highly migratory, wintering mainly south of its breeding grounds, almost as far as the equator. Vagrants reach Micronesia, Polynesia and New Guinea, with at least four records from Australia, and two birds seen in New Zealand.

The northern pintail is a fairly large, slender dabbling duck. It is larger than teal species but smaller than a mallard. The drake in breeding plumage is unmistakable. At a distance it appears a mainly grey with a chocolate-brown head and neck, and with a white stripe extending from the white breast and lower neck up the side of the neck to eye-level. The back and sides have a grey, brown and black pattern, with a creamy patch anterior to the black under-tail coverts. The two black central tail feathers are greatly elongated, making up about a quarter of the bird’s total length. The female is brown, but its slender body, long thin neck and pointed tail, together with smallish head with a grey bill, make it recognisable at close range. The male in eclipse (non-breeding) plumage is similar to the female. Both sexes have a fast, graceful flight when the slender body, long neck and tail, and pointed wings are apparent. Both sexes show a dark speculum bordered white at the rear, especially prominent in the female.

Voice: the male’s call is a soft whistle whilst the female has a mallard-like quack.

Similar species: breeding males are unmistakeable. Females and males in eclipse are smaller than a mallard, with relatively longer necks, grey bills and unstriped, speckled buff faces. The grey teal has similar facial markings (or lack thereof) to northern pintail but is smaller and more compact with a greyer face, red eye and prominent white triangle on the upperwing (northern pintail wing markings resemble those of the mallard).

The northern pintail breeds across the northern parts of Europe, Asia and North America. They are highly migratory, wintering mainly south of the breeding range from about 40⁰N almost to the equator in Panama, Africa and Asia. There have been many cases of lateral migration with birds from Russia and Japan being recovered in North America, and birds from Canada recovered in the United Kingdom. Small numbers migrate from North America to Pacific islands, especially Hawaii where a few hundred winter each year. Vagrants have been recorded in Polynesia, Micronesia and New Guinea with about four records from Australia.

The breeding habitat is in open, shallow wetlands, whilst in winter it frequents sheltered coastal waters, estuaries, brackish water, as well as shallow, open freshwater wetlands.

A male in breeding plumage was discovered on Farewell Spit on 19 October 1997. It was with a small flock of mallards on a flooded pan. The bird was found again two days later but not seen again. The date was consistent with a bird overshooting on its southward migration. The only other record was a female was found near Invercargill in October 2021.

Northern pintails are generally shy and wary. Large congregations can occur on the wintering grounds. Birds feed mostly on plant material taken whilst dabbling, that is, up-ending in shallow water where their long necks allow them to feed in deeper water than other dabbling ducks. Feeding is mainly in the evening and at night, and invertebrates are added to the diet during the breeding season.

A large, slender dabbling duck in which the male is grey with a brown head and neck, a white stripe extending from the white breast up the side of the neck, grey back and sides, brown and black patterning with a creamy patch, and two elongated black central tail feathers. The brown female has a smallish head with a grey bill, slender body, long thin neck and pointed tail.

Males on pond, with female call at end of recording