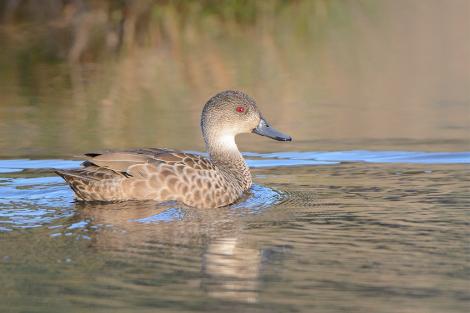 The grey teal is a small dabbling duck that frequents shallow freshwater lakes. The bird is extremely nomadic. This nomadic way of life enables the bird to quickly exploit shallow temporary water during irregular flooding in the interior of Australia. The grey teal was self-introduced to New Zealand from Australia from irregular irruptions. The last major irruption occurred in 1957 following drought conditions in Australia. Pair-bonds appear to be retained from one season to the next.

The grey teal is small, slim, ‘plain-faced’ duck, considerably smaller than a mallard or grey duck. It is mostly grey-brown in colour with pale cheeks, chin and throat. The eye is bright crimson, especially in adult males, and the bill is dark grey. Immature birds have a duller red eye. Wings are dark brown with the primaries darker brown, a broad green speculum on the secondaries, and a white stripe on the inner wing, just in front of the speculum. The underwing is off-white. Grey teal can be identified in flight by the white flash on the upperwing and the fast wing beat, although both are identical in the vagrant chestnut teal.

Similar species: chestnut teal (other than males in breeding plumage) are very similar to grey teal, differing mainly in being darker on the chin and cheeks, and having a more buff tone to the grey of the cheeks, throat and breast. Some male chestnut teal in eclipse plumage have a pale patch on the flank at the base of the tail, which becomes white in breeding plumage, when their bright chestnut plumage and green head make them very different to grey teal.

Grey teal are a breeding species in Australia, New Guinea, Indonesia, New Zealand, Vanuatu and the Solomon Islands. They are widespread in New Zealand, with the greatest concentrations in Canterbury (especially Lake Ellesmere), South Auckland, Waikato, Hawkes Bay and Otago. The first specimens in New Zealand were obtained by Sir Walter Buller in 1866 from the Manawatu district, but at that time they were known to be plentiful in Rotorua at Ohinemutu and Lake Rotomahana. Grey teal have been recorded as vagrants on the Chatham Islands (July 1951, December 1998), Snares Islands (2 in November 1987), Enderby Island, Auckland Islands (16 in November 2011) and Campbell Island (October 2012).

Most grey teal occur in areas below 300 m above sea level and they are rare above 900 m. The preferred habitat is shallow freshwater lakes, lagoons and swamps with extensive marginal cover, but at times birds are seen on salt and brackish water.

The grey teal is one of the most numerous ducks in Australia, and is one of the most common birds shot there in the hunting season, particularly in inland areas, but in New Zealand its hunting is prohibited. The New Zealand population was estimated at 20,000 birds in 1976, and had increased to an estimated 50,000 birds by 2005, with the main increase being 20,000 birds on Lake Ellesmere. Consideration was given to adding the grey teal to the game bird list when the Wildlife Act was reviewed in 2010, but the grey teal remains fully protected in New Zealand. Globally the grey teal is believed to number more than 1,000,000 birds. Grey teal in New Zealand and Australia have a relatively high mortality rate. Particularly in Australia recruitment is erratic. Populations rise very rapidly in times of flooding, but decline during dry periods. Two Australian mortality studies obtained similar results: 60% died in the first year of life, 80% in the first two years and 96% before the end of the fourth year. Similarly for the New Zealand population, it was found that 68% died in the first year of life.

In New Zealand at least 6% of the population is shot during the five week hunting season, which is high considering that hunting of this species is prohibited. Introduced mammalian predators, especially ferrets and stoats which are common in wetland locations, are a major threat to adults and their broods. Swamp harriers, eels and rats are also known to take ducklings when on the water.

In Australia grey teal are adapted to breeding in shallow temporary water; they have no fixed breeding season and can breed at any time of the year when food is abundant. In the dry interior of Australia the bird is extremely mobile and is one of the first ducks to arrive in a locality in preparation for breeding after flooding. In New Zealand, the breeding appears to be seasonal beginning in June and can extend to January. Breeding probably commences at one year of age. Nest sites can be found in tree hollows and on the ground under the bower of tall grasses. They also readily accept nest boxes. Clutches consist of five to nine cream coloured eggs. Egg dumping by other females can increase the clutch size. Pair-bonds are retained from one season to the next. The female incubates, but the male helps in defending the ducklings. Like all ducks there is synchronous hatching.

Grey teal are very mobile. Movements within New Zealand appear to be random, with birds dispersing in all directions. Some of the movements are achieved in a very short period of time. For example, a teal marked at Mangere in Auckland was shot the next day 125 km away. In New Zealand and Australia rapid changes in numbers can occur at any locality. Local populations can appear fairly constant, but their composition changes as individuals arrive and depart. In Australia, during drought conditions very extensive movements and great mortality occur.

Grey teal are normally nocturnal feeders but are frequently seen forging at dawn and dusk. They feed on small aquatic insects, molluscs and the seeds of swamp plants. Food is obtained by filtering the surface water and the mud. In Australia the bulk of the diet consists of plant material (87-97% by volume), mostly seeds. Insects are eaten throughout the year, but especially in the spring, while mollusca and crustacea are important in the diet only in the autumn and spring. Invertebrates and molluscs are obtained by filtering the surface water and by dredging mud at the waters edge, and seeds are obtained by stripping the plants on the waters edge or near water. In Australia downy chicks feed exclusively on insects but the relative amount decrease to only 30% by four weeks of age.

A small grey-brown teal with pale-edged body feathers, pale cheeks, chin and throat, crimson eyes, and a dark grey bill. The wings are dark brown with darker brown primaries, a broad green speculum on the secondaries, and a white stripe on the inner wing in front of the speculum.