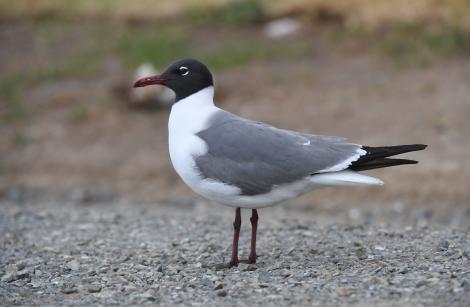 Laughing gulls breed on the Atlantic coast of North America, in the Caribbean, coastal Venezuela and the Pacific coast of Mexico. They are only occasionally seen inland, and are resident on their breeding grounds in the southern part of their range year-round. Birds north of North Carolina typically migrate south for the winter. They are rare vagrants in Britain and western Europe, and have been recorded on at least 10 occasions in Australia.  The first New Zealand record was a second-winter bird first identified on 23 December 2016 at the Te Ahiaua Reserve, Waiotahi River estuary, west of Opotiki in the Bay of Plenty. Over the following weeks the same individual was sighted at several points along the coast between the Opotiki wharf and Ohiwa Harbour. A couple living near the Opotiki wharf who fed gulls in their garden reportedly first noticed the bird around the beginning of December 2016. There was a gap of about 11 months in sightings before the bird was relocated in breeding plumage in December 2017.

A medium-sized gull, slightly larger than a red-billed gull. Breeding adults have an entirely black head with prominent white upper and lower eyelids. Non-breeders have variable amounts of dark smudgy colouring on the head, particularly behind the eyes and around the nape.  The upper surfaces of the wings are mostly a smooth dark grey (darker than on red-billed gulls) with a white trailing edge (visible as a short broken white stripe across the back when the wings are folded), and sooty black wingtips; the inner primaries have small white tips.  The underwings are grey in juveniles, becoming white with age.  Juveniles have extensive, mottled dark coloration on the sides of the neck and breast; as the birds age this becomes less extensive and more even in colour – breeding adults have white underparts.  The tail and rump are white, though there is a dark tail band in the first year. The bill is large and long, red when breeding, blackish with sometimes a faintly reddish tip when non-breeding. Their legs are moderately long, reddish (when breeding) or blackish (non-breeding).

Voice: the typical call is a strident Ha! Ha! Ha! which gives the species its name.

Similar species: Franklin's gull is smaller, with shorter bill, legs and wings, more rounded head, and has more white at wingtips, and a broader ring of white feathers around the eye.

Laughing gulls breed in colonies of up to 25,000 birds in saltmarshes, and on islands and sandy beaches where they are safe from terrestrial predators. They are primarily coastal, but can be found on landfills and lakes a short distance inland, and occasionally much further, particularly on migration and in winter. Breeding on the US east coast is from April to July, after which birds from North Carolina northwards migrate south to Central and South America.  Breeders on the Mexican Pacific Coast may disperse northward to the Salton Sea in southern California, or southwards as far as Peru.  Birds in Mexico, the Caribbean and Venezuela are resident throughout the year and can breed at any time. Much depleted in the 19th and early 20th centuries by egg and feather collectors, they are now increasing throughout much of their range.

Laughing gulls are sociable and will associate with other species of gulls, but have suffered competition from the expansion of larger species.  They often harry terns and pelicans for food, and have been controlled through culling of eggs and adults to protect endangered terns in the Gulf of Maine, as well as to reduce numbers around airports.

Laughing gulls are opportunistic feeders that eat a wide range of marine and terrestrial invertebrates, as well as human food waste, scavenged fish, hand-outs from beachgoers, berries, and occasionally eggs of other birds.

A medium-sized gull with black on the head, slightly larger than red-billed gull, with white belly, breast and neck (though may be grey on the sides). Rather long blackish legs, and a large and long, dark red to blackish bill. The upper wing surfaces are dark grey with white trailing edges and sooty black tips.