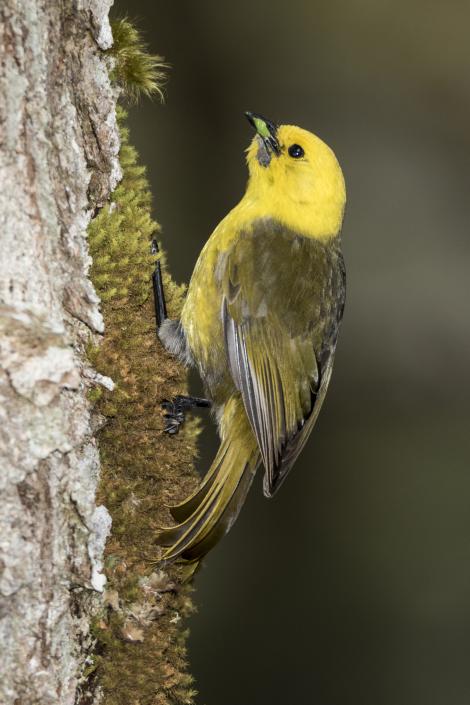 Yellowheads are sparrow-sized, yellow-headed forests songsters. They were once one of the most common and conspicuous birds of South and Stewart Island forests, but have been gradually declining since the arrival of ship rats and stoats in New Zealand. Since the 1970s their range contraction has been dramatic, with many of the small scattered populations disappearing. Today they remain common in beech forests in parts of the Catlins, the Blue Mountains, the Dart and Landsborough Valleys, with scattered small populations in eastern Fiordland, west Otago and a small remnant population in North Canterbury. They have been introduced to several predator-free southern islands where they have mostly flourished.

Yellowhead are closely related to the brown creeper and whitehead, and all three species are the preferred hosts of the long-tailed cuckoo.

The yellowhead is a small, forest-dwelling songbird with a conspicuous yellow head and breast, brown back, wings and tail and a white lower belly and vent. The end of the tail is tattered and spiky when worn. The bill and legs are black.

Voice: a characteristic machine-gun like chatter made by both sexes, and an often musical song made by males which varies from place to place. Females make a distinctive descending buzzing call.

Similar species: the only yellow-headed bird with which they might be confused are male yellowhammers, but yellowheads never leave the forest, and yellowhammers never enter it. Their calls can sometimes be confused with those of brown creeper.

Yellowheads were previously found in all forests in the South and Stewart Island from sea level to the tree line, but since at least the 1960s they have become confined to beech forest, and there has been a recent dramatic contraction in range. Yellowheads are now found in beech forests in Fiordland, the Catlins, Blue Mountains, some valleys in west Otago, the Landsborough Valley and the Hawdon and Hurunui Valleys in Canterbury. They are common only in the Catlins, Blue Mountains, Dart and Landsborough Valleys. Yellowheads have been introduced to Nukuwaiata and Bluemine Islands in the Marlborough Sounds, Breaksea, Anchor, Pigeon, Secretary, Resolution, Chalky and Pomona Islands in Fiordland, Pigeon Island (Wawahi-Waka) in Lake Wakatipu, and Codfish and Ulva Islands off Stewart Island.

Where they still occur, yellowheads are most common in tall red and silver beech forest.

With the exception of Nukuwaiata, yellowheads are common on the islands that they have been introduced to, and are still common in the parts of the Catlins, Blue Mountains, Dart and Landsborough Valleys. Elsewhere scattered pairs remain. The total population is probably of the order of 5000 birds.

Yellowheads are preyed on by stoats and rats, particularly while they are nesting and roosting in holes. In higher altitude beech forests their populations do well in most years, but in years following heavy beech seeding high numbers of rats and stoats often decimate populations. At low altitudes continuously high numbers of rats and stoats quickly eliminated yellowheads and they only survive at low altitudes on predator-free islands. Yellowhead populations thrive with effective stoat and rat control.

Yellowheads breed in spring and summer, mostly as monogamous pairs, but with helpers at some nests. A woven, feather-lined cup of fibrous material is built in a cavity in a tree, between 0 and 31 m off the ground. Clutch size 1-4. Only females incubate, which takes 20-21 days. Both sexes feed the young, which leave the nest after 18-22 days, and are fed intensively for a few more weeks, and occasionally for up to 9 months. Some nests are parasitised by long-tailed cuckoos.

Yellowheads spend most of their time high in trees gleaning invertebrates from foliage, or searching for invertebrates by scratching amongst accumulated litter in the crooks of branches, or scratching loose bark mosses and ferns on the trunks of trees. They often scratch with one leg whilst hanging onto a tree trunk with the other leg and using their tail as an extra prop (hence the spiky tail). They are often detected by the rain of litter they dislodge. They flit agilely from branch to branch but are surprisingly poor fliers when moving more than a few metres. During their breeding season they forage in family groups comprising a pair, sometimes one or two helpers and any chicks of the year. In the autumn and winter they move around in much larger groups often with yellow-crowned parakeets and fantails in attendance.

Because they mostly forage high in trees they are most often detected by their calls, particularly the chatter and male song.

A small forest-dwelling songbird with a conspicuous yellow head and breast, brown back, wings and tail, and a white lower belly and vent. The end of the tail is tattered and spiky when worn and the bill and legs are black.