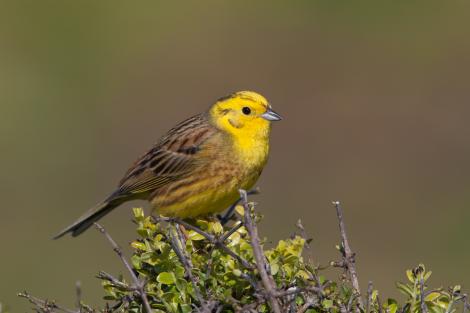 The colourful yellowhammer is a common inhabitant of open country throughout much of New Zealand. Introduced from Britain by Acclimatisation Societies between 1865 and 1879, it has spread widely, including reaching many off-shore islands. Yellowhammers feed on a variety of seeds and invertebrates. They are frequently seen feeding on the seeds in hay fed to livestock, and also on newly-sown grass seed.

Yellowhammers are similar in body size to a house sparrow; however their tail is relatively longer. The male has a mostly bright yellow head and underparts, and a darkly streaked mantle. The female is much browner and more streaked on the head and upper surface, with some yellow on the underparts. Both sexes have white outer tail-feathers, which are conspicuous in flight, and chestnut rumps.

Voice: the song of the male is distinctive and repetitive; often rendered as 'a little bit of bread and no cheese'. The contact call of ‘twick’ or ‘twitic' is given frequently by both sexes.

Similar species: the male of the much rarer and more localised cirl bunting, has a darker general appearance. The yellow colouration is largely confined to streaks above and below the eye, with some yellow on the underparts. The female cirl bunting has even less yellow than the female yellowhammer. Both sexes have olive-green rumps. The endemic yellowhead is superficially similar to the yellowhammer; however this bird is shorter in the tail and lacks the dark streaking of the yellowhammer. It is also rare and localised, never in the North Island (see its distribution map) and confined largely to beech forests, whereas the yellowhammer prefers open country. Pipit, skylark and chaffinch all have white outer tail feather showing in flight, but are unlikely to be confused with yellowhammer if seen well.

Yellowhammers are widespread and common in open country throughout much of the New Zealand mainland. However, they are sparsely distributed in parts of Fiordland, western Canterbury and south Westland in the South Island. In the North Island, they are uncommon in some higher inland parts of the central and eastern districts. Yellowhammers are present on many offshore islands, from the Three Kings in the north to islets off Stewart Island in the south. They also breeds on the Kermadec Islands. Their status on the Chatham Islands is unclear (either a rare breeding species or vagrant from mainland New Zealand). Vagrants have been reported from Snares, Antipodes, Auckland, Campbell and Lord Howe Islands.

The natural breeding range of the yellowhammer is Eurasia, extending from Britain east to Siberia and south to the Mediterranean Sea. Many birds from northern populations winter in North Africa, the Middle East and southern Asia.

The yellowhammer is a bird of open country. This includes farmland with ditches and hedgerows, pasture with patches of scrub and trees, stubble fields and weed-infested crops. It can also frequently be seen in city gardens and parks outside the breeding season, especially in places where there is newly-sown grass seed. They are common in coastal habitats, and also inhabit tussock grassland, though seldom in alpine areas. It is found mostly from sea-level up to 600 m, occasionally up to 1600 m.

Yellowhammers are common and widespread in open country throughout much of the mainland. They are uncommon (possibly vagrant) on the Chatham Islands.

The clearance of native forests benefited this species greatly. It was considered a pest in the early 20th Century when pasture was being established on newly-cleared farmland. This was due to its habit of feeding on the newly-sown seeds. Around this time it also caused a considerable amount of damage to grain crops. As a result of this damage, a bounty was placed on the heads of yellowhammers, and their eggs. Flocks may still cause much loss of newly-sown grass seed on lawns and playing fields and in parks.

Yellowhammers do not appear to be a major competitor with any native species. Their diet, consisting largely of grass seeds, does not overlap with that of any native species of open country to any great extent.

Yellowhammers are normally double-brooded, and defend a territory throughout the rather long breeding season, which stretches from October to March. The nest is usually on or close to the ground in long grass or thick shrubby vegetation. It is a loosely-constructed cup of dry grass lined with rootlets, hair or other fine fibres. The 3-5 (typically 4) eggs are pinkish-white with dark-brown scribbles and spots. They are incubated mostly by the female, and the resultant chicks are fed by both parents mainly on invertebrates for 12-13 days, and for about a further 3 weeks after fledging.

Yellowhammers spend most of their time on the ground, on pasture, ploughed land, crops and stubble, and also on lawns and in gardens. They are monogamous in the breeding season, but congregate in flocks ranging in size from several individuals to more than a thousand birds outside this period. They are often in mixed flocks with other species, including chaffinch, greenfinch, goldfinch, house sparrow and cirl bunting, especially at a good food source. Males sing from a conspicuous perch during breeding e.g. on a treetop or power line. During the breeding season, a distraction display may be performed if the nest is disturbed.

There is no evidence that yellowhammers migrate within New Zealand; however there may be some seasonal altitudinal movement. They regularly cross open water, as birds have reached many outlying islands unaided.

Yellowhammers feed mostly on seeds, especially those of grasses. Barley grass, ryegrass and Poa annua seeds are commonly consumed, also those of chickweed, dandelion and Amaranthus. Invertebrates are an important food source, especially in the breeding season. These include grasshoppers, moths, caterpillars, flies, beetles, aphids, bugs, cicadas and spiders. The chicks are largely fed on invertebrates, especially before fledging.

A small relatively long-tailed songbird with a grey-black bill and pinkish legs in which the male has a mostly bright yellow head and underparts, and a dark-streaked brown mantle, and the browner female has more streaking on the head and upper surface with some yellow on the underparts. Both sexes have a rich chestnut rump and white outer tail feathers, which show during flight.

Song of male without final flourish