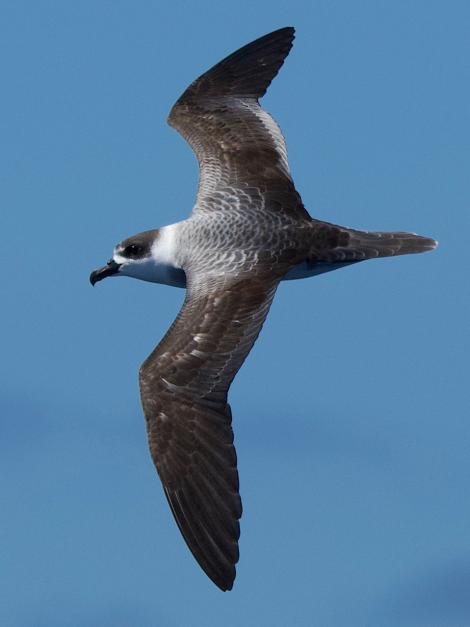 The white-naped petrel is a large, elegant seabird with a distinctive broad white hind neck. Nearly its entire population nests at Macauley Island in the Kermadec group. It is a pelagic species and so is generally only seen from boats. The white-naped petrel was originally described from Raoul Island, but was extirpated there by introduced cats and rats, and subsequently considered to be extinct.  It was rediscovered on Macauley Island in 1966, where the population increased to 50,000 pairs following goat eradication. A few pairs breed on Phillip Island off Norfolk Island.

The white-naped petrel is a large grey-and-white petrel with a distinctive black cap and white nape. The black cap covers the crown and the sides of the head to just below the eye, contrasting with the white forehead and nape. A broad white collar separates the cap from the grey mantle and back feathers which have white fringes in fresh plumage. However the worn plumage of adults makes them look much darker above. The rest of the upper surface is grey with a blackish rump and a blackish 'M' mark from wing-tip to wing-tip. The underside is mainly white apart from a partial grey collar, mainly black flight feathers and a narrow black band along the leading edge of the underwing tapering inwards to a point behind the elbow. The bill is long and black; the legs and feet are pinkish with the terminal half of the feet black. Birds of all ages and sexes have similar plumage, but fledglings (May-June) in fresh silvery-grey dorsal plumage look very different to the worn chocolate-brown adults at the same time of year.

Voice: white-naped petrels are silent at sea but noisy on and over their colony, where the main flight calls are variants on a loud ooo kek-kek-kek-kek-kek and the main ground call is a repetitive eh eh eh.

Similar species: the Vanuatu petrel (not recorded from New Zealand) has identical plumage, but is slightly smaller with a proportionately longer tail. Of species recorded from New Zealand, the Juan Fernandez petrel (a very rare vagrant) is most similar to the white-naped petrel, differing in having a grey (cf. white) hind-neck. The other large petrel with a distinctive white collar that may occur in the New Zealand region is the great shearwater (also a very rare vagrant), which has the long thin bill of all shearwaters, a prominent dusky belly patch, a white crescent on the uppertail, and dusky marks in the wing-pit. Buller's shearwaters are superficially similar but have a long slender bill, a dark forehead, an almost pure white underwing, a more wedge-shaped tail, and lack the white hind-neck.

The white-naped petrel breeds only at Macauley Island (Kermadec Islands), apart from a few pairs that have colonised Phillip Island (Norfolk group) recently. It formerly bred on Raoul Island (Kermadec Islands) but was wiped out there by cats and rats by about 1914. Fortunately a previously unknown population was discovered on Macauley Island in 1966 and, since the eradication of goats there, this population has undergone a massive expansion so that it now holds approximately 50,000 pairs. The white-naped petrel feeds mainly well out to sea, spending most of its life in tropical and subtropical waters and only rarely reaching latitudes of the North Island of New Zealand (exceptionally Stewart Island). During the breeding season it is commonly seen at sea near the Kermadecs and in the south-west Pacific Ocean. In the non-breeding season (May - November) it migrates to the northern hemisphere, mainly to the south-east of Japan; it is rarely seen in the central and eastern tropical Pacific.

About 50,000 pairs of white-naped petrels were estimated to nest on Macauley Island in 1988. A tiny population of 10 - 100 breeding pairs has established on Phillip Island, Norfolk group, since 1992.

Little is known of the breeding ecology of the white-naped petrel. At the extinct Raoul Island colony, they were reported to return in late September or October but none was seen at Macauley Island by 24 September 1988, and at Phillip Island birds have first been reported on 11 November. On Macauley Island, courtship occurs in late November. On Raoul Island, eggs were laid in late December - early January, but at Phillip Island laying occurs from 8 - 31 January. Hatching occurs at Phillip Island from 22 February. Young depart from late May to June, when about 100-115 days old. As for all petrels, white-naped petrels are monogamous, lay a single large (66 x 47 mm) white egg per year, and have shared incubation and chick-care.

White-naped petrel flight is graceful and effortless, with few wing-beats. They are mainly nocturnal at the Macauley Island colony, but the earliest birds come ashore as the sun sets. White-naped petrels are usually solitary at sea, but form loose feeding flocks with other seabirds.

A large gadfly petrel with a black cap, white forehead, nape and broad collar, grey mantle and back, blackish rump and blackish 'M' from wing-tip to wing-tip. The underside is white with a partial grey collar, mainly black flight feathers, a short narrow black band along the central leading edge of the underwing, a long black bill and pinkish legs.

Adult birds on ground at colony, black-winged petrels in flight in background