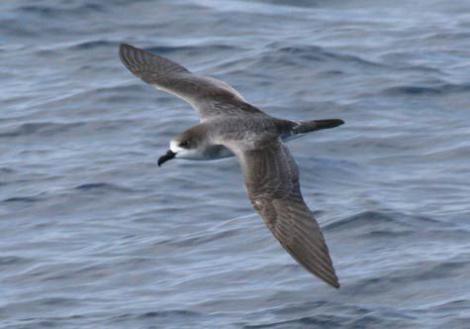 The Juan Fernandez is a large, strikingly patterned petrel that ranges over much of the Pacific Ocean. It breeds only on the Juan Fernandez Islands off the coast of Chile, and migrates north to tropical North Pacific seas between Hawaii and Mexico. Occasional birds range further west to eastern Australia and New Zealand, where it has been recorded most often at the Chatham Islands. The frequency of sightings on Rangatira Island, Chatham Islands, including of a bird on the ground at night, suggests this species has attempted to colonise. No nests or locally-reared young have yet been found, but they could easily be overlooked on this congested seabird island.

The Juan Fernandez petrel is one of the largest gadfly petrels, and is strikingly white below. It is similar in size to a sooty shearwater, but with markings like an oversized Cook’s petrel. The upperparts are silvery-grey, darker on the wings and tail, with a dark grey cap and blackish eye-patch separated from the large black bill by clear white forehead. In fresh plumage there is a pronounced dark ‘M’ from wingtip to wingtip across the lower back, contrasting with the silvery back, mantle and inner forewing. As plumage wears, the entire upperwing appears dark. When moulting, pale bases to nape feathers may show as a narrow white hind-collar (cf. white-naped petrel), and the rump can similarly appear pale. The underparts are white apart from dark tips and trailing edge to the wing, a small but variable black carpal bar extending diagonally in from the elbow joint, and dark tips to the tail feathers. The Juan Fernandez petrel is a graceful, effortless flier compared to smaller relatives.

Voice:  at night over breeding colonies Juan Fernandez petrels give a sighing whistle sometimes followed by a harsh bark or wowk. Also a booming boo-boo-boo from the air or on the ground.

Similar species: the Juan Fernandez petrel is very similar in size and structure to the white-naped petrel, which always has a bold white hind-neck contrasting strongly with the blackish cap. The very similar Barau’s petrel from the southern Indian Ocean (not yet recorded from New Zealand) is slightly smaller and has a more prominent black carpal bar on the otherwise white underwing. The much smaller Cook’s and Pycroft’s petrels have similar plumage but are smaller winged and have more vigorous wing action and erratic flight. Buller’s shearwater has similar plumage but longer, slimmer bill, dark forehead, and different shape (with a smaller head, longer neck and longer tail) and flight, mainly staying close to the sea. Juan Fernandez petrel and other gadfly petrels tower up in arcs with wings held vertical.

The Juan Fernandez petrel is a pelagic seabird of the eastern Pacific Ocean, that only comes to land to breed (though note birds apparently prospecting at the Chatham Islands). It breeds only on the Chilean island of Mas-a-fuera (Isla Alejandro Selkirk) in the Juan Fernandez Islands, and migrates north to tropical North Pacific seas between Hawaii and Mexico. Occasional birds range further west to Australia and New Zealand.

The first New Zealand record was a storm-wrecked bird found in inland Waikato in October 1971. The specimen was sent to Auckland Museum, where it was initially identified as the similar white-naped petrel from the Kermadec Islands. At least two birds were present on Rangatira Island, Chatham Islands between 1984 and 1999, where one was killed by a skua in December 1989, and one was found in a burrow in March 1997. One was seen on nearby Mangere Island in January 1988, and another at the Tuku light site (where Chatham Island taiko are lured in for capture) on Chatham Island in October 1997. The most recent sightings, and the only at-sea sightings in New Zealand, were off the Otago coast in March 2012, and off East Cape in February 2013.

Juan Fernandez petrels breed on ridges at high altitudes (above 750 m) on Mas-a-fuera, where the single white egg is laid in November in burrows 2-3 m long. Both parents share incubation (c.60 days) and chick-rearing (90-100 days). Eggs hatch in February and chicks fledge in May.

Juan Fernandez petrels occur solitarily or in loose flocks at sea, sometimes with other seabirds (e.g. pink-footed shearwaters near the breeding island). The bird off the Otago coast was among a large flock of sooty shearwaters, but flying by itself. They have typical gadfly petrel flight, high banking with wings held vertical and the carpal (elbow) joint pushed forward, alternating with glides close to the sea surface. Feeds by surface-seizing, aerial pursuit, dipping and pattering.

Juan Fernandez petrels eat fish and squid obtained on or near the sea surface. They feed by surface-seizing, aerial pursuit, dipping and pattering.

A large gadfly petrel with white underparts and silvery-grey upperparts that become darker on the wings and tail, a dark grey cap and blackish eye-patch separated from the large black bill by a clear white forehead, and dark tips and trailing edges to the wings. A dark ‘M’ runs from wingtip to wingtip and a small variable black carpal bar on the underwing extends in from the elbow joint.

Birds on and over breeding colony

Call from bird in burrow