Geographical variation: No subspecies described, but the proportion of colour morphs differs in different parts of the country. 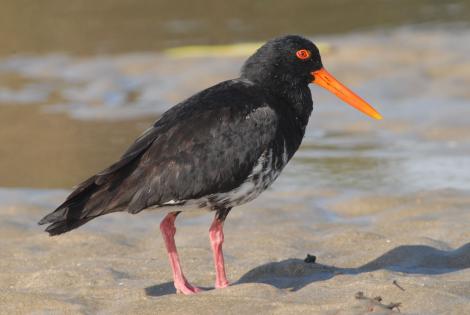 The variable oystercatcher is a familiar stocky coastal bird with a long, bright orange bill, found around much of New Zealand. They are often seen in pairs probing busily for shellfish along beaches or in estuaries. Previously shot for food, variable oystercatchers probably reached low numbers before being protected in 1922, since when numbers have increased rapidly. They are long-lived, with some birds reaching 30+ years of age.

The existence of different colour morphs (black, intermediate or ‘smudgy’, and pied) caused early confusion, and they were variously thought to be different species, forms, or hybrids. This confusion was compounded by a cline in morphs, with the proportion of all-black birds increasing from north to south. The colour morphs inter-breed freely and are now all accepted as being a single species.

The variable oystercatcher is a large heavily-built shorebird. Adults have black upperparts, their underparts vary from all black, through a range of ‘smudgy’ intermediate states to white. They have a conspicuous long bright orange bill (longer in females), and stout coral-pink legs. The iris is red and eye-ring orange. Downy chicks occur in two colour morphs; they have a black bill, pale-mid grey upper parts with black markings, and either grey or off-white underparts. First-year birds have a dark tip to the bill, browner dorsal plumage, and grey legs.

Voice: variable oystercatchers are very vocal; loud piping is used in territorial interactions and when alarmed, and they have a loud flight call similar to other oystercatchers. Chicks are warned of danger with a sharp, loud ‘chip’ or ‘click’.

Similar species: the black and smudgy morphs are distinctive. Pied morph birds can be confused with South Island pied oystercatcher. If seen together, adult variable oystercatchers are noticeably larger, but first-year birds may be confused. The demarcation between black and white on the breast is generally sharper on South Island pied, and they have more white showing forward of the wing when folded, and a broader white wingbar in flight. The pied morph is similar to Chatham Island oystercatcher, but their ranges are not thought to overlap.

Variable oystercatchers occur around most of the coastline of North, South, and Stewart Islands and their offshore islands. Strongholds are in Northland, Auckland, Coromandel Peninsula, Bay of Plenty, Greater Wellington, Nelson/Marlborough, and Fiordland. They occur at lower average densities on west coasts of the two main Islands, and have not been recorded from any outlying island groups.

Variable oystercatchers breed most commonly on sandy beaches, sand spits, and in dunes, but will use a wide variety of coastal habitat types, including shell banks, rocky shorelines, and less often gravel beaches. They forage in all these areas and also on inter-tidal mud-flats in estuaries, and on rock platforms. Variable oystercatchers are not usually seen far from the coast, but will forage in paddocks, and occasionally nest a short distance inland, usually on mown or grazed grassy areas or bare ground. A very few nest around lakes or a short distance up braided rivers.

There were about 2000 variable oystercatchers in the early 1970s, this had risen to about 4000 by the mid-1990s. There have been no nationwide surveys in recent years, but if the increase has continued at the same rate, the total population would now be 5000-6000. On the Northland east coast and on Coromandel Peninsula, the increase appears to be slowing, possibly as those areas approach carrying capacity. Population growth and delayed maturation mean there are many pre-breeders in the population, so the number of breeding birds is somewhat less than the total. Roughly two-thirds of the population is thought to be in the North Island.

Breeding success of variable oystercatchers is often low, with main causes of failure being predation of eggs or chicks by a range of mammalian and avian predators, flooding of nests by big tides, and disturbance resulting from human recreational use of the coast. Adults generally show high annual survival, but are occasionally killed by cats and stoats. No specific conservation measures are undertaken, but some birds on the east coast of the northern North Island benefit from protection programmes for New Zealand dotterels and fairy terns.

Variable oystercatchers breed in monogamous pairs, and defend territories vigorously against neighbours. Nests are normally simple scrapes in the sand, often with a marker of driftwood, vegetation, or flotsam. The 2-3 eggs are usually laid from October onwards (rarely September), and replaced if lost. Incubation is shared and takes about 28 days. Chicks fly at 6-7 weeks-old, and late chicks may not fledge until March. Chicks are vigorously defended by both parents, often well after fledging. In Northland and Auckland, most birds do not breed until they are 5 years or older.

Adults show high fidelity to mate and site. Many breeding pairs remain on territory year-round, but some join flocks of pre-breeders for the autumn and early winter, typically at larger estuaries.

Variable oystercatchers are often highly aggressive towards people close to nests or chicks, dive-bombing (sometimes making contact) and screeching. They also undertake distraction displays on the ground in defence of eggs and chicks. On the North Island east coast, territories often overlap with those of New Zealand dotterels. There is normally little aggression, but there have been a few cases of nearby dotterel nests being taken over (usually after variable oystercatchers have lost their own nest), and a few birds have been seen killing small dotterel chicks.

Unlike most shorebirds, variable oystercatchers feed their young. Small chicks often remain hidden under vegetation, rocks, etc, with parents bringing food; this probably reduces the risk of predation by gulls and harriers. As chicks grow, they gradually find more of their own food, but are often seen begging from parents well after fledging. Sibling rivalry is common; when hatching is asynchronous, there is often large variation in size of the chicks within a brood. Adults commonly false-brood to conceal the location of nest or chicks.

Variable oystercatchers eat a wide range of littoral invertebrates, including molluscs, crustaceans, and annelids. They favour bivalve molluscs (e.g. mussels, tuatua, cockles) when these are available; these are opened either by pushing the tip of the bill between shells and twisting, or by hammering. They occasionally take small fish. On grass, variable oystercatchers eat a range of terrestrial invertebrates, including earthworms. When foraging, they are sometimes accompanied by kleptoparasitic red-billed gulls.

A large heavily-built wader with black upperparts and underparts that vary from all black through a range of ‘smudgy’ intermediate states to white. The long straight bill is bright orange, the stout legs coral-pink, and the eyes red each with an orange eye-ring.

Calls from pair on stony beach after dark