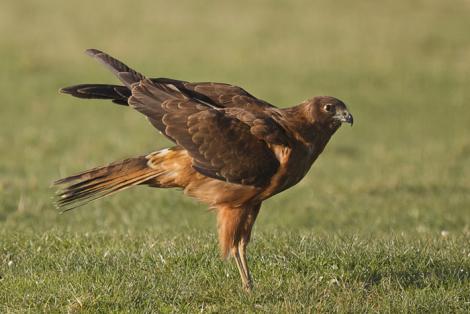 The swamp harrier is a large, tawny-brown bird of prey that occurs throughout New Zealand. It is an opportunistic hunter that searches for food by slowly quartering the ground with its large wings held in a distinctive shallow V-shape. Adapted to hunt in open habitats, its numbers have benefitted from widespread forest clearance and the development of agriculture. Although carrion is a major component of the harrier’s diet, it also actively hunts live prey such as small birds, mammals and insects. Capable dispersers, birds from New Zealand visit islands as far north as the Kermadec Islands and as far south as Campbell Island. Known for their dramatic ‘sky-dancing’ courtship display the swamp harrier is the largest of the 16 species of harriers found worldwide.

Often seen perching on fence posts at the side of the road, swamp harriers are a large, long-legged bird of prey with sizeable taloned feet, prominent facial disks and a strongly hooked bill. Fledglings and juveniles have dark chocolate brown plumage all over, a whitish patch on the nape, brown eyes and a pale yellow cere, eye ring and legs. Although plumage is highly variable, adults generally have a tawny-brown back, a pale cream streaked breast and yellow eyes. They become paler with successive moults. Females are slightly larger than males. Harriers most often search for food low to the ground in a gently rocking glide interspersed with lazy wing beats. When gliding or soaring, their wings are set in a shallow V-shape with upturned fingered wing tips and an outspread tail. The cream/white rump is obvious in flight. They can hover clumsily for short periods.

Voice: harriers mainly vocalise as part of their courtship displays during the breeding season. Their call is a series of same note, high-pitched, short, sharp “kee-o kee-o.” At other times of the year they are generally silent.

Similar species: sometimes confused with the New Zealand falcon. Falcons very rarely feed on carrion, are smaller and are more often seen in active chasing flight rather than the slow quartering flight typical of the harrier. Also the falcon lacks the obvious cream/pale rump of the harrier and glides with its wings set flat. Juvenile black-backed gulls are a similar size to harriers. However, young gulls have a stout, straight bill and are a more mottled greyish/brown colour. Gulls also have narrower angular wings that, unlike harriers they beat almost continually in traversing flight or set rigidly in a slightly downwards droop when soaring/gliding.

Swamp harriers occupy a wider ecological niche in New Zealand than elsewhere in Australasia. Abundant throughout most of New Zealand including the coastal fringe, estuaries, wetlands, pine forest, farmland and high-country areas. Less abundant over large tracts of forest and in urban areas. They are resident on the Chatham Islands, and often reach offshore islands as distant as the Snares, Auckland, Campbell and Kermadec Islands. Harriers are particularly abundant where plentiful food sources are available. They breed in wetlands, areas of long grass and scrubby vegetation.

Harriers provide some level of control over introduced pests such as mice, rats and rabbits. They benefit farms and road users by clearing carcasses. However, they can take poultry and game birds where unprotected, and will also kill new-born lambs in some circumstances. They are partially protected, and it is legal to control individuals that are causing harm to property. At some sites, harriers are controlled to reduce the predation risk to endangered bird species. However, the effectiveness of control as a threatened species management technique or a method of reducing predation on poultry, game and lambs remains poorly understood. Harriers are susceptible to collision with cars and wind turbines.

Solitary breeders. Courtship displays start as early as June and continue through October. During displays both birds of a pair perform spectacular rocking dives, then swoop back up in a large U-shaped loop. A high-pitched kee-o, kee-o call is made during displays. These displays are often performed over the nest area. Eggs are laid between October-December. Incubation and brooding are undertaken by the female alone. Food is passed from male to female in dramatic aerial food-passes where the female turns upside down to take prey from the male. Bulky nests comprised of sticks are placed on the ground or on low bushes, in long grass, scrub or wetlands. Nests may be added to over multiple seasons. Harriers are sensitive to disturbance when nesting.

Their long legs enable them to catch prey by dropping down into the canopy of trees or long vegetation, legs outstretched and wings held back behind them. Wings are held in a shallow V-shape to allow birds to react to variable air currents while flying low to the ground. As a generalist predator they are universally harried by other birds especially magpies and spur-winged plovers. Harriers often circle up high on thermals, and are able to disperse great distances in this manner. Although partly migratory elsewhere in Australasia, they are not generally thought to be migratory in New Zealand. However, some local movements between breeding and wintering grounds, annual movements across Cook Strait and visits to offshore Islands as far away as the Kermadec Islands suggest some migratory behaviour may occur. During the breeding season they have a home-range of  about 900 ha, may be far less in some habitats. In the non-breeding season harriers often form communal roosts which can contain several hundred birds.

Small to medium-sized birds and mammals, insects, lizards and frogs. Road-kill carrion can make up a large proportion of the diet e.g. possum, rabbit and hedgehog, especially during winter when other food sources are limited. Lamb carcasses and afterbirth, tadpoles, fledgling birds and crickets are taken when seasonally available. Cast pellets of undigested material.

Bird in flight (skylark in background)