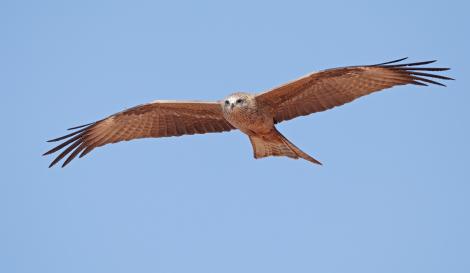 The black kite is a very common hawk that occurs widely throughout Australia, Africa and Asia. They are gregarious and opportunistic, with large flocks sometimes gathering around cattle yards, slaughterhouses and refuse dumps where they scavenge for scraps. Black kites will also rob nestlings, steal food from other birds, as well as prey on small birds and insects. They are excellent soarers, and occasionally cross the Tasman Sea to New Zealand.

The black kite is a medium-sized dark brown hawk with longish rectangular, harrier-like wings, with pale brown across the shoulders. It has a long distinctly forked tail, and the legs and feet are short and weak. The soft parts including eyes are yellow. They are commonly seen gliding, soaring, or quartering the ground in search for food. Their flight is very distinctive and buoyant, the tail is continually opening, closing and flexing with the air-currents and when gliding, the carpal joint is often well forward with the wingtips slightly drooped.

Voice: a high pitched quavering “kwee-err”; a staccato “keee-ki-ki-ki” including whistles and squeals.

Similar species: the black kite is similar to the much more common swamp harrier. Unlike the harrier, the black kite does not soar with its wings held in a shallow V, but has a more flattened profile. It also lacks the harrier’s distinctive pale rump and long legs.

Widespread and common throughout southern Europe, Africa, Asia and Australia.

There are eight widely scattered records from both the North and South Islands: Renwick, Marlborough (1992-1994, and again 2000-15), Glentanner, Lake Pukaki (1994), Wanaka Airport (1996), various South Auckland localities (2001-2003), Pirinoa, Wairarapa (2002), Inglewood, Taranaki (2009), and near Mercer (2016-17). The single vagrant black kite seen near Renwick in 1992-94 is likely to be the same bird reported there in 2006. This bird was still present near Renwick in early 2015, having presumably been in the area some 23 years, roosting in a group of gums off the Waihopai Valley Road. This area of Marlborough has an open landscape and warm climate, similar to areas where these kites live overseas.

Black kites prefer open plains and countryside, in warm to dry, semi-arid to arid areas. They are typically gregarious, and are often seen in small to very large flocks. They are able to soar effortlessly to great heights. When walking, they appear to shuffle along on short legs with their tails held horizontally off the ground. In New Zealand, reports of the Renwick black kite indicate that the bird was quite sedentary. The decades-long presence of this bird shows that black kites can survive long-term in parts of the New Zealand landscape.

The black kite is a very opportunistic and successful hawk. Its diet is mainly carrion but it also includes human refuse, shellfish, fish, small mammals, reptiles, insects and birds. It will also steal food from other birds. In their native lands, they take advantage of rodent and insect plagues, as well as capturing small birds, mammals and insects fleeing from bush fires and agricultural burn-offs.

A medium-sized dark brown hawk with longish rectangular harrier-like wings, pale brown shoulders, long forked tail, short yellow legs and feet, and a yellow cere at the base of the dark short hooked bill. Commonly seen gliding and soaring, their flight is buoyant with the tail continually opening and flexing and the carpal joint often held well forward with the wingtips slightly drooped.