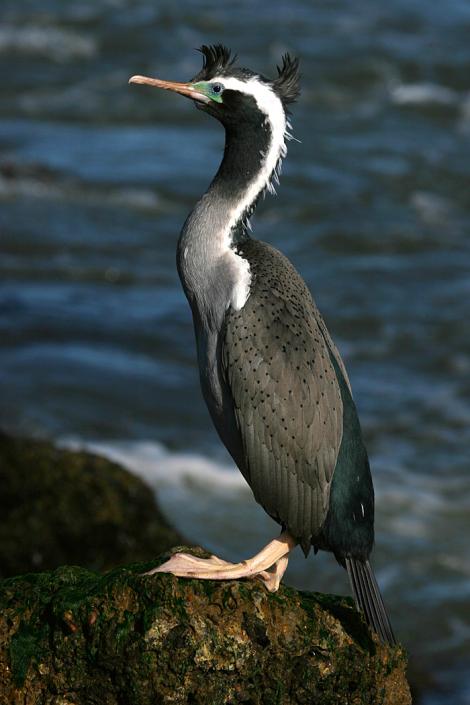 The spotted shag and closely related Pitt Island shag are the only yellow-footed shag species endemic to New Zealand. Adult spotted shags in breeding plumage are elegant and colourful, sporting a Mohican-like double crest, bright green-blue facial skin and blue eye rings. The species gets its name from the small black spots that appear near the tip of each back and wing covert feather during the breeding season. Spotted shags are entirely marine, breeding on the coasts of the North, South and Stewart Islands, and feeding in waters out to 16 km. Outside the breeding season, spotted shags form large feeding and roosting flocks of up to 2000 birds. Before 2019, spotted shag and Pitt Island shag were placed in their own genus (Stictocarbo). A DNA study published that year revealed that spotted shag and Pitt Island shag were embedded in the genus Phalacrocorax, closest to pied shag, black-faced shag (P. fuscescens) and little black shag.

The spotted shag is a slim, medium-sized, grey-blue marine shag with a long, slender bill and yellow-orange feet. Adult breeding birds have small black spots on the pale silver-grey and brown back and wings, pale grey-blue underparts, and black thighs, rump and tail. A distinctive curved broad white stripe runs from above the eye down both sides of the neck, separating the black lines of the throat, pale silver-grey and brown back, and long neck to the base of the wing. White filoplumes grow diagonally from the black neck and thighs, and a distinctive black, decurved, double crest grows erect on the forehead and nape. Bare facial skin between the eye and bill turns green-blue before the breeding season. The eye ring is blue, the iris dark brown. and the long, slender, hooked bill orange-brown. Non-breeding adults are duller, lack crests, have a neck stripe obscured by dark feathers, yellowish facial skin, and paler underparts. Immatures are paler and browner, and lack distinct head or neck markings. In flight, spotted shags appear slender and pale with a darker rump and tail. The usually fly low over water, often in ‘V’ formation, using rapid wingbeats. Sexes are alike in plumage but males differ in their calls and courtship behaviour.

Spotted shags occur mainly around the South Island in coastal waters out to 16 km, entering inlets and estuaries to feed and roost. They are more localised on the west coast of the South Island, around Stewart Island, and parts of the North Island, including the Hauraki Gulf, Kapiti coast, Hawke's Bay and Wellington Harbour. The strongholds for spotted shags are the Marlborough Sounds, Banks Peninsula and Otago coast. They are concentrated around breeding sites during summer, dispersing to other coastal areas in winter to form large flocks, usually within 200 km of the breeding grounds.

The IUCN Red List and Department of Conservation classify the spotted shag as Not Threatened. Nests around Ashburton were systematically destroyed after the number of fishing huts increased there in the 1970s. Colonies at the Noises Islands in the Hauraki Gulf were reduced by illegal shooting in the 1980s, resulting in a localised decline. Some birds are caught accidentally and drown in fishing nets. See New Zealand fisheries by-catch information here.

Spotted shags breed in colonies of a few pairs to 700 pairs. Timing varies year to year and in different parts of the range, depending on food availability. Peaks of laying recorded in Hauraki Gulf during March, August and December, at Matiu/Somes Island during June and November, at Banks Peninsula and Otago Harbour during September-November, and at Punakaiki during March-April and August-October. Hundreds of colonies are present throughout range. Spotted shags are monogamous; 3-4 pale blue eggs are laid in large nest platform made of sticks, iceplant and grass built 1 m apart on coastal cliff ledges and stacks. Incubation and chick-rearing are shared. Young leave the nest at 62 days. The oldest spotted shag recorded was over 10 years old.

Spotted shags dive from the sea surface to catch fish and marine invertebrates with their slender hooked bills, propelling themselves underwater with webbed feet. Outside the breeding season they form large feeding and roosting flocks of up to 2000 birds. Elaborate male display movements include wing-waving, swing-pointing, bowing, darting, sky-pointing, gaping, kink-throating, hopping, and various other body postures. Displaying males grunt; females are silent.

Spotted shag diet consists of small fish and marine invertebrates, including squid and plankton. They feed in deep water up to 16 km offshore. Longest dive recorded was 70 seconds. Spotted shags often have a mass of small stones (‘rangle’) in the their gizzards, the function of which is debated, with possibilities including to function as ballast, to grind up food, and to create an inhospitable environment for gut parasites. Roosting birds often regurgitate piles of rangle stones that are obvious on sandy beaches but overlooked at rocky sites.

Turbott, E.G. 1956. Notes on the plumage and the breeding cycle of the spotted shag Phalacrocorax (Stictocarbo) punctatus punctatus Sparrman 1786. Records of the Auckland Institute and Museum 4: 343-363.

A slim, medium-sized, grey-blue marine shag of the mainland with a long, slender bill and yellow-orange feet. Adult breeding birds have black spots on the back and upperwings, and two curved, broad, white stripes that run from each eye down each side of the neck.

Bird on eggs in colony

Adults at nests in breeding colony

Begging young with one adult at nest