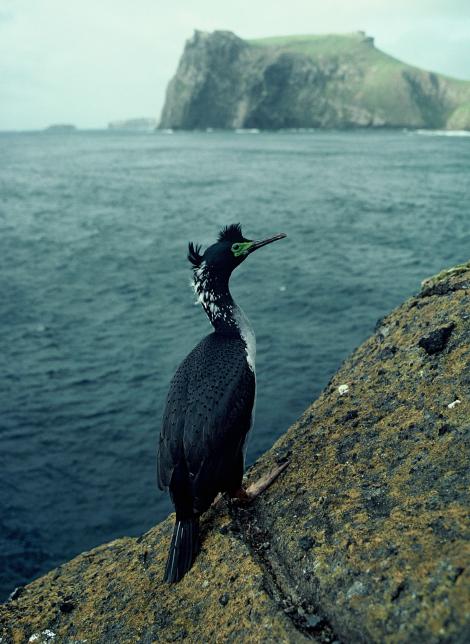 The Pitt Island shag is a critically endangered shag restricted to the Chatham Islands. As the only small slender grey shag with yellow feet in the islands, it is easily recognised. Despite its declining population, it can readily be found breeding and roosting in small groups along the rocky coast line throughout the group. It is a marine species that breeds and roosts on rocky headlands and offshore islets and within parts of the brackish Te Whanga Lagoon. A recent DNA study proposes placing spotted shag and Pitt Island shag in the genus Phalacrocorax rather than Stictocarbo, closest to pied shag, black-faced shag (P. fuscescens) and little black shag.

The Pitt Island shag is a small, slender marine shag commonly seen roosting on rocky shorelines or feeding close offshore. It is the only yellow-footed shag in the Chatham Islands, and is slender and grey, with a very slender bill (all characters unlike the two other resident shag species: Chatham Island shag and black shag). Pitt Island shags have a dark brown-grey back with a small black spot on each feather, and a pale grey breast. The head is blackish when breeding and has a prominent double crest on the forehead and nape. In flight, Pitt Island shags appear slim and dark-bodied, and hold the head and neck horizontally. Before the breeding season, adults have dense white filoplumes on the hindneck and their facial skin is bright green. During breeding this fades to pale green, the filoplumes are shed, and the crests become less prominent.

Voice: during breeding, male Pitt Island shags are noisy at colonies, with range of grunting, gargling and ticking calls, however females are silent. Birds are largely silent when away from colonies.

Similar species: Pitt Island shags are unmistakeable in the Chatham Islands, being the only small slender grey shag with yellow feet. Birds in flight can be separated from other shag species present in the Chatham Islands by their slender profile and the way they hold their head and neck horizontally.

The Pitt Island shag is endemic to the Chatham Islands group, with birds breeding on Chatham Island, Pitt Island (including offshore islets such as Rabbit Islands and Murumuru Rocks), Rangatira Island, Mangere Island, Little Mangere Island, Western Reef, The Castle, Star Keys, Sisters and Forty Fours. Colonies are situated on eroded pockets, cracks and ledges on coastal cliffs, with birds commonly roosting on headlands and offshore rock stacks. The Pitt Island shag is an exclusively marine feeder, foraging throughout inshore coastal waters. One small colony is found within the brackish Te Whanga Lagoon where birds also forage within the deeper, southern portion of the lagoon.

The Pitt Island shag population has undergone significant decline in the past 15 years. In 1997 the breeding population was 729 pairs, but had declined to an estimated 434 pairs in 2011.

Populations of Pitt Island shag are threatened by loss of breeding habitat, disturbance from stock, human persecution, introduced predators, gull predation and fisheries bycatch. However given that population declines have been recorded at colonies on remote predator free off shore islands it is likely that some at-sea effects are impacting on the population.

There has been no direct conservation management action to benefit Pitt Island shag other than co-ordinated island wide population censuses. The recent increase in fencing coastal habitats on the Chatham Islands will prevent stock from gaining access to some colonies, thereby reducing disturbance. The conservation status of this species was changed from nationally endangered to nationally critical in 2013.

Pitt Island shags breed in loose colonies of 5-40 pairs. Nests are built in eroded pockets, cracks and ledges on coastal cliffs. The 2-4 eggs are laid August – September, sometimes as late as December. Adults share incubation, which takes around 30 days. Chicks are initially guarded by one parent, then are left alone in the nest when approximately two weeks old. Chicks are fed by regurgitation by both parents and probably fledge at about 6-8 weeks. It is likely that birds start breeding when 2-3 years old.

Pitt Island shags roost in small flocks, but usually feed solitary. Birds feed close to shore along rocky coasts, and in the brackish Te Whanga Lagoon, where they swim on surface, diving to forage underwater for small fish. They are sedentary, remaining solely within coastal Chatham Island waters.

A small, slender grey marine shag of the Chatham Islands, with yellow feet and a very slender bill. In breeding plumage it has a blackish head with a prominent double crest.

Adults and young at nest on cliff face