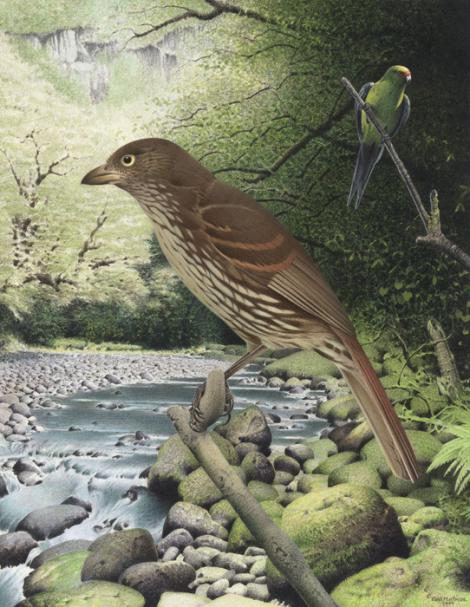 The South Island piopio was one of two closely related endemic piopio species, both now extinct. The relationships of piopio to other songbird species had long been a puzzle, especially given their superficial resemblance of Australian catbirds (which are bowerbirds). Recent DNA study revealed that piopio are orioles – a group of songbirds that are typically bright yellow-and-black elsewhere, but more sombre olive and brown in Australasia. Since the oriole group originated 20 million years ago, an ancestral species would have had to reach New Zealand by dispersal across the Tasman Sea. The true relationship of piopio was presciently recognised by Thomas Potts in 1872, when he wrote “From a nest found at Arahura we have an egg that exactly resembles in its colour and markings that of Oriolus galbula [golden oriole], of Europe”. In the 1800s, European settlers called piopio "the native thrush" due to a superficial resemblance to the smaller introduced song thrush. Its Maori name is based on the usual call of the North Island bird. The South Island piopio’s melodious song was described as the sweetest of New Zealand songbirds, comprising five distinct bars, repeated six or seven times in succession, with a variety of sub-songs and mimicry described, including some similar to yellowhead and Australian magpie.

The South Island piopio was a medium-sized, mainly olive-brown songbird with rufous wings and tail, and white-and-brown striped underparts. The robust, dark-brown bill had a slightly decurved upper mandible ending in a sharp point, and there were short hair-like whiskers at the base of the bill and covering the nostrils. The eye was yellow, and the long legs were dark brown. The sexes were alike. The Stephens Island subspecies was smaller, with a streaked crown and more rufous on the head and wing.

Voice: the South Island piopio was one of New Zealand’s best songsters. It had a powerful, melodic song with tuneful phrasing and some mimicry. A long purring chur-r-r was given as a threat to intruders at the nest.

Similar species: the introduced song thrush is about half the size of a piopio, and is paler underneath (more spotted than streaked) with a finer bill.

The South Island piopio occurred throughout the South Island, on some Fiordland islands and on Stephens Island in Cook Strait. It was abundant throughout, but had become scarce in drier eastern districts by the time of European settlement. They remained abundant in podocarp-dominant forest and "fruit-bearing scrubs" from sea-level to the alpine zone on the West Coast through to the 1880s. South Island piopio were observed foraging around some early European campsites and huts.

The South Island piopio declined rapidly following European settlement, especially after 1870. It was extinct on Banks and Otago Peninsulas by the 1880s. It was still relatively common on the West Coast and Fiordland in the 1880s, but was extinct there by c.1895. This decline coincided with the spread of introduced ship rats, and their final disappearance occurred about the time that stoats reached the West Coast and Fiordland. The Stephens Island subspecies was abundant in 1895 but extinct by 1897 following clearance of the island’s forest and introduction of cats by lighthouse keepers. Unconfirmed South Island sightings persisted into the 1930s, with the last in west Otago in 1963. Suggestions to transfer South Island piopio to an offshore sanctuary such as Kapiti Island or Little Barrier Island never eventuated, as live capture of free-flying forest birds was very difficult before the invention of modern mist nets.

Little information available. South Island piopio were apparently monogamous, with laying occurring (at least) in late December. The cup-shaped nest of small dry twigs with bark and moss, lined with grass or tree-fern, was placed 1.2 - 4.6 m from the ground in a fork of a small upright branch, among thick foliage. Nest dimensions were c.18 cm external diameter and 13 - 30 cm external depth, with 7.6 cm internal diameter and 5.1 cm internal depth. The 1-2 white or pinkish-white glossy eggs with dark brown-black blotches were incubated by the female at least; the male’s parental roles are unknown, but both adults defended the young.

South Island piopio were territorial and usually seen in pairs. They were described as tame, bold, and unafraid of humans. Two records describe 12 and 20 birds foraging around campsites, including eating from the hand. A bird approaching to investigate an unusual sound kept its tail spread, moving sidewards along a branch, turning its body right and left, and examining the observer closely. They were also observed spreading their tail and lowering their wings while singing. South Island piopio scratched around on the ground among forest litter and moss, using their feet and bill to search for insects, fruits, seeds and leaves, and foraged in glades on river beds during the hottest months. Their song was mainly heard in the early morning and early evening, usually continuing after the dawn chorus. Flights were short, swooping and powerful.

An extinct medium-sized olive-brown songbird with rufous wings and tail, white-and-brown striped underparts, yellow eyes, and the long dark brown legs. The robust dark-brown bill had a slightly decurved upper mandible ending in a sharp point, and there were short hair-like whiskers at the base of the bill and covering the nostrils.