Geographical variation: Several subspecies described, with O.f. serratus supposedly confined when breeding to eastern, northern and western Australia and the South Pacific, including the Kermadec Islands. 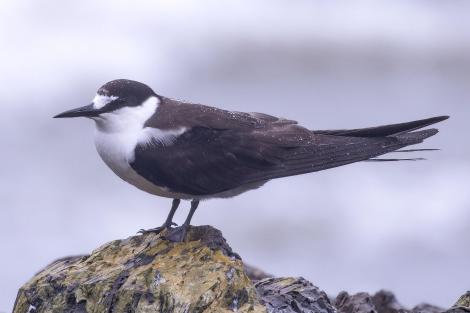 The sooty tern is a medium-sized tropical tern with global distribution. It is slender and handsome, with strong contrast between dark brown-grey/black plumage above and white below. They are highly gregarious and noisy at breeding sites, but outside the breeding season they are pelagic and rarely seen near land. Their oceanic travels are not well known, but band recoveries have revealed birds moving thousands of kilometres. Colonies are restricted to small, mostly predator-free islands and can be huge (more than 1,000,000 birds). In the New Zealand region the sooty tern occurs in what are now relatively small colonies in the Kermadec Islands, and it is a rare visitor to the mainland.

The sooty tern is a striking, medium-sized black-and-white tern. It is long and streamlined, with long wings and strongly contrasting plumage, dark above and white below. The upperparts are fully dark, except for a white leading edge to the inner wing. The underparts are white (greyer towards tail) except for the darker wingtips, trailing edge to the inner wing and outer tail. Tail is markedly forked with long outer tail feathers forming streamers. The white forehead patch terminates just above the eye. The slender black bill is slightly shorter than the head; the eyes and feet are dark. Juveniles have very different plumage, being mainly dark brown above with prominent white or buff bars formed by pale edges to the feathers. The throat and breast are also dark, grading into a paler belly and undertail, and the underwings are pale grey.

Similar species: the bridled tern, which is much smaller, has white extending just beyond the eye, and is paler dorsally, appearing dark grey rather than blackish. It is more likely to be seen in coastal environments where sooty terns do not normally occur.

Sooty terns are present in all tropical oceans, and some sub-tropical regions. Outside the breeding season they stay well offshore and are rarely seen. Sooty terns breed on small islands including atolls, sandbanks, rock stacks and offshore islands, but generally forages offshore even when breeding. The only New Zelaand breeding sites are on the Kermadec Islands, where there are small colonies on most islands in the group. Other nearby colonies are found on Norfolk and Lord Howe Islands. At least some birds travel long distances. A bird ringed on Raoul Island (Kermadec Islands) in the 1960s was breeding on Aride Island (Seychelles) in the 1990s; over 14,240 km by the shortest sea route.

Human harvesting, especially egg collection has impacted many colonies worldwide and numerous former colonies have disappeared. However, some protected colonies have demonstrated rapid regeneration. On Raoul Island human harvesting ceased by the 1930s, but cats and rats were a problem until eradicated in 2002-04.

Changes in food supply may be a threat, especially near colonies at breeding time. Climatic and human induced changes in fish populations and locations are potential threats. Sooty terns feed on baitfish chased by tuna, but the impact of changes in tuna stocks on foraging success is unknown.

Sooty terns start arriving at Kermadec Islands colonies in August/September, initially at night in low numbers, but increasing rapidly before laying of the single egg in October-November. Females can relay once or twice if the egg is lost. Laying is synchronised within colonies. Both adults incubate, and they will stand over the egg to provide shade on hot days. Both parents feed the chick, usually, but not exclusively at night. Young fly after 4 weeks and leave the colony after 8 weeks. Kermadec colonies are deserted by the end of May.

Sooty terns breed monogamously in dense, noisy colonies, which may vary in size from year to year. They forage within 300-500 km of the colony. Fledglings spend several years at sea without returning to land. Sooty tern behaviour is poorly known, and the whereabouts of Kermadec birds in the non-breeding season is unknown. They are long-lived, with some birds recovered more than 30 years after banding.

Sooty tern diet varies with location and availability, and is comprised of fish, crustaceans, and squid, taken at sea, during both daylight and at night.

Gaskin, C.P. 2011. Seabirds of the Kermadec region, their natural history and conservation. Science for conservation no. 316. Wellington, Department of Conservation.

A medium-sized black-and-white tern, dark above and white below, with a white forehead patch that ends just above the eye, a slender black bill, dark eyes and legs, and long wings and tail. The dark upperparts, white underparts and leading edge to the inner wing, darkening wingtips, inner wing and outer tail; juveniles are dark brown with thin white barring on upperparts.

Calls by birds at breeding colony