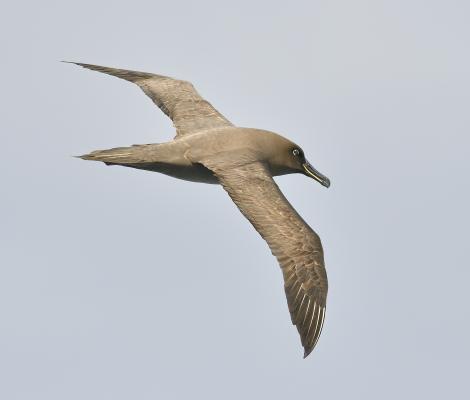 Sooty albatrosses in a generic sense (Phoebetria, two species) are entirely dark small to medium-sized southern hemisphere albatrosses. They were originally assigned to the same genus as other albatrosses, but later separated, which has been vindicated by molecular phylogeny showing that sooty albatrosses are most closely related to mollymawks. The sooty albatross Phoebetria fusca was described in 1822 from a specimen from the Mozambique Channel.

The sooty albatross is a slender all-dark chocolate brown albatross with a long pointed tail (wedge to diamond shaped when spread, rarely seen at sea except when feeding), slender head, long narrow wings usually flexed at the carpal joint, and a typically effortless flight, smoother and overall higher above the water than in other albatrosses (except for the light-mantled sooty albatross). Adults in fresh plumage are entirely dark brown except for the whitish shafts of primaries and main tail feathers, a white crescent above and behind the eye, and a cream to yellow-orange stripe (sulcus) on the side of the slender glossy black bill. In juveniles, the sulcus is dark to flesh grey, and the crescent above and behind the eye is dull greyish white, with both only discernible in close view. In worn plumage, both adults and immatures become paler and mottled with buff edges to the contour feathers, especially on the nape and the sides of the neck, with worn birds appearing to have a pale whitish cream to buff collar highlighting a dark “burglar’s” face mask. Such plumage wear during the breeding season is indicative of non-breeding status, whether immature or adult. The legs and feet are pinkish mauve to greyish flesh.

Similar species: light-mantled sooty albatrosses have a pale grey (not dark brown) back, a pale blue (not cream or yellow) stripe on the side of the bill, and, in worn plumage, whitish rather than cream pale areas on sides of neck, nape and also extending to the upper back, contrasting with the dark upper wings. Light-mantled sooty albatrosses also have a concave (not straight) edge to the upper mandible. Black-footed albatrosses have a distinct pale area surrounding the black bill. All dark giant petrels (juveniles and immatures of both species) are larger, heavier and bulkier looking, with a proportionately larger head and a distinctly pale (not black) and massive bill. Juvenile wandering albatrosses, which are even larger and heavier looking, are also mostly dark brown, but have a distinctive white face mask and underwings, and a pale pinkish bill.

Sooty albatrosses breed on volcanic islands in the South Atlantic Ocean (Gough Island and Tristan da Cunha group) and southern Indian Ocean (Prince Edward, Crozet, Kerguelen, Amsterdam and Saint Paul island groups). The world population is in the order 13,000 - 14,000 pairs, with Gough, Tristan, Prince Edward and Crozet the main breeding localities. Serious recent declines (up to 7% per year) have been recorded at most of the latter localities, mostly due to accidental captures on high seas longlines.

At sea, sooty albatrosses are mostly confined to the South Atlantic and South Indian Oceans, ranging from 40°W (rarely further west towards Cape Horn) eastwards to the Great Australian Bight, the approaches to Bass Strait and South Tasman Rise, with stragglers to New South Wales and New Zealand. The latitudinal distribution extends from 35°S to 65°S (southern subtropical to Antarctic waters) in summer, and from 25°S to 40°S (subtropical waters) in winter. Immatures apparently stay in subtropical waters throughout the year.

Sooty albatrosses forage primarily over deep oceanic waters, south of Australia also over the continental slope and submarine rises. Birds tracked while breeding (August-May) foraged between 31°S and 62°S, up to 2200 km (but usually within 600 km) from their nest. Non-breeders stayed in their respective oceans between 25°S and 65°S, with birds from Gough Island confined to the South Atlantic Ocean, whereas non-breeding adults from the Crozet Islands regularly foraged in the Great Australian Bight. Birds seen in Australasia, mostly from autumn to spring, are thus non-breeders most likely to originate from Indian Ocean breeding islands.

There are four accepted records for the New Zealand region: one seen north of the Auckland Islands in February 1991; one seen over the Pukaki Rise on 21-22 Nov 1993; one adult seen and photographed ashore on Antipodes Island in October-November 1995; one seen off the Chatham Islands on 30 Dec 2006.

Sooty albatrosses usually breed in small groups of 5-60 nests, occasionally solitarily, building their pedestal nests on tussock covered ledges of coastal and inland cliffs (latter only at Gough, Tristan and Amsterdam islands). They are biennial breeders, returning to their breeding grounds in mid-July to early September. The single white egg is laid in mid-September to late October. Chicks hatch in December, are brooded for three weeks, and fledge in May to early June after a rearing period of c.5 months. Immatures first return to land when 8 years old, and start breeding when 12 years old (average ages).

When displaying on land, their distinctive pee-oo skycalls form the trademark soundscape of sooty albatross colonies, cutting through the heaviest surf poundings against the cliff base of colonies. Sooty (and light-mantled sooty) albatrosses also excel in their superb synchronized pair display flight off their colonies, regularly switching flight angles in unison. They have complex and evolving displays of about 15 “signs” (postures) through which prospective partners progress from fleeting encounters (male sky calling, female landing and “glancing”) to uneasy acquaintance (scapular action, bill pointing, bill clashing) to close bond (mutual skycalling and preening) spanning up to several months ashore.

Being rather shy and low down in the dominance hierarchy among large procellariiformes, sooty albatrosses are mostly solitary feeders at sea, although they occasionally associate with yellow-nosed mollymawks and whales. Based on activity loggers, they forage mostly during daytime, with a peak of feeding activity in the last three hours before dusk.

Ridoux, V. 1994. The diets and dietary segregation of seabirds at the subantarctic Crozet Islands. Marine Ornithology 22: 1-192.