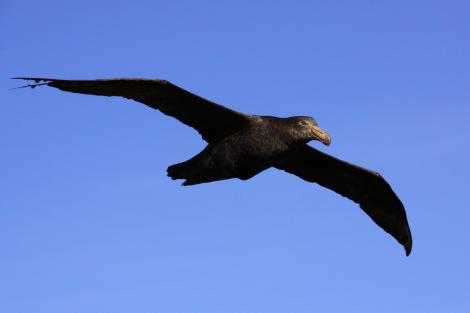 Giant petrels are large fulmarine petrels, the size of a mollymawk, with a large wingspan and huge bill. Although they resemble mollymawks and albatrosses, they are more closely related to five smaller fulmarine petrel species, including the Antarctic fulmar, Cape petrel and snow petrel. They have two large tube nostrils that are joined together on the top of the huge bill, in contrast to those of albatrosses which are smaller and separated, lying one on each side of the bill. Giant petrels' wings are shorter than mollymawks' and albatross', relative to body length. There are two species of giant petrel, both with circumpolar distributions, and both of which occur in New Zealand waters. The northern giant petrel breeds at four New Zealand subantarctic island groups, while the nearest breeding site of the southern giant petrel is Macquarie Island.

An estimated 2,570 pairs of northern giant petrels breed in New Zealand annually, before dispersing to temperate and subtropical seas during winter. They are aggressive and opportunistic seabirds that scavenge penguin, albatross, seal and whale carrion, ship offal and kelp. They prey on penguin and albatross chicks and other seabirds up to the size of an adult albatross. They also take fish and squid from the sea surface.

Adult northern giant petrels have a mainly dark grey-brown body with a pale grey face (this pale grey extends to the neck, breast and belly in populations breeding in the South Atlantic). The eyes are pale grey to whitish and the bill is pinkish-yellow horn with a red-brown tip. The sexes look similar although males are markedly heavier with larger bills. The legs and feet are dark grey. Juveniles are dark sooty black with a yellowish bill, and become paler-headed with age. The traditional seafarers' name for this species - "stinkpot" - is apt. Adult birds and chicks have an intense, foul smell like putrifying flesh.

Voice: northern giant petrels whinny, growl and snap their bills when threatened. They are noisy when feeding in flocks. Chicks make piping sounds.

Northern giant petrels are pelagic and circumpolar, generally found between 30-64°S. In summer they range from subantarctic to Antarctic open oceans; in winter to early spring they range throughout subtropical seas to 28°S. Adults stay relatively close to colonies during chick-rearing. In New Zealand they breed at the Auckland, Campbell, Antipodes and Chatham Islands; they formerly bred in small numbers at Port Pegasus, Stewart Island. Within the Chatham Islands they breed only on The Sisters and Forty Fours islands. Elsewhere, northern giant petrels breed on South Georgia, Prince Edward Islands, Crozet and Kerguelen Islands, and Macquarie Island.

The world population of northern giant petrels was recently estimated at between 11,000 and 14,000 pairs. There were c.2000 pairs at the Forty Fours and 80-100 pairs at Middle Sister in the Chatham Islands, 230 pairs at Antipodes Island, 230 pairs at Campbell Island and 50 pairs at the Auckland Islands.

The main threats to northern giant petrels are being caught and drowned on commercial longline fishing hooks, and fatal collisions with the heavy metal cables that attach trawl nets to commercial fishing vessels. Other marine threats include eating marine plastic debris, oil spills and shooting by commercial fishers to reduce bait stealing. Between 2000 and 4000 giant petrels were estimated killed in illegal or unregulated longline fisheries in 1997-1998. Since then improved bycatch mitigation practices in some longline fisheries around breeding colonies, including South Georgia, have led to a reduction in observed bycatch of this species in these areas. Secondary mortality from ingested hooks and bycatch in illegal or unregulated fisheries may still be a threat. At the Chatham Islands, fisheries bycatch returned by observers from New Zealand waters between 1996 and 2005 reported 17 birds.

The IUCN Red List classifies the northern giant petrel as Least Concern; the Department of Conservation classifies it as At Risk/Recovering.

Northern giant petrel colonies range from 10 to 280 nests, spaced 3-5 m apart. The nest bowl is built of twigs, tussock, leaves and stalks, and is placed at low altitude on densely vegetated ground. The breeding season in New Zealand runs from August to February. Northern giant petrel breed as monogamous pairs, with shared incubation and chick-rearing. The single large (102 x 66 mm) white egg is laid in August or September. Incubation takes c.60 days, after which chicks are brooded for 2-3 weeks then guarded for a further 2 weeks; males undertake the larger part of incubation and guard duty. The chicks fledge in February when about 112 days old. The average age of first breeding is around 10 years.

Aggressive and opportunistic, giant petrels (both species) are the main scavengers in subantarctic and Antarctic waters where they eat penguin, albatross, seal and whale carrion, along with live prey (see below). Unusually for a petrel, adult birds walk strongly on land where they aggressively compete for carrion and prey; they are the only petrels that will feed while on land. They are capable of opening large intact seal and whale carcasses on land and at sea, using their huge bill to make a hole. Once the hole is large enough they insert the bill and head into the carcass to access internal organs, often blooding the head and neck feathers in the process, hence the old mariners' name of "sea vulture". The pecking order at carcasses is enforced with threat displays, with wings spread, tail raised and fanned, neck arched, and bill held open and pointing downward. Birds also congregate when washing and preening.

During courtship, birds preen, sway and call. Birds' bills touch rapidly, creating a clicking sound. Males open wings and extend them fully. Aerial displays are also performed, with a high-pitched whinny given by birds in a slow glide over the nesting area, with the head raised and neck arched.

Northern giant petrels scavenge corpses of birds and mammals (on beaches and at sea), and take fishing waste and some kelp. They prey on penguin and albatross chicks, and also kill and eat other seabirds up to the size of an adult albatross. Northern giant petrels also take fish and squid by surface-seizing, surface-diving and pursuit plunging down to 2 metres.

Adult on nest with egg, threatening to regurgitate at recordist