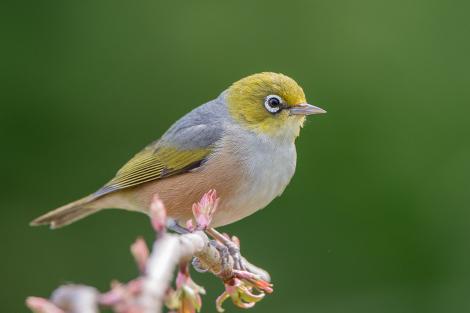 The silvereye colonised New Zealand from Australia in the 1850s, and is now one of New Zealand’s most abundant and widespread bird species. It is found throughout New Zealand and its offshore and outlying islands, occurring in most vegetated habitats, including suburban gardens, farmland, orchards, woodlands and forests. Silvereyes are small songbirds that are easily recognised by their conspicuous white eye-ring; their plumage is mainly olive-green above and cream below. It is an active, mobile species that moves about frequently, including making sea crossings.

The silvereye is a common small songbird immediately recognisable by its distinctive white eye-ring. It has olive-green plumage on the head, lower back and upper tail, and mid-grey on the hindneck, sides of neck and upper back. The upper wings are mostly dark olive green, with narrow lines of yellowish green, and the tail is dark olive green. The underparts are whitish-cream on the throat and upper breast, creamy grey on the belly and undertail, the flanks are pinkish-buff, the thighs are white, and the underside of the wings creamy-white. The dark brownish-black bill is fine, short and sharply pointed. The iris is dark reddish-brown, and the legs and feet pale brown. The sexes are alike. Juveniles have similar colouring to adults but have a narrower and duller white eye-ring.

Voice: a range of clear often high-pitched and melodious calls including warbles, and trills, often repeated, used in a wide variety of contexts. The main contact is a plaintive creee, and the flight call a shorter cli-cli, with many birds calling at once. Full song is a quiet, long liquid warble, similar to the song of the dunnock.

Similar species: bellbird is of similar build but twice the size, lacks the white-eye ring and is olive-green on underparts as well as upperparts.

Silvereyes occur throughout New Zealand from sea level up to about 1,200 m altitude, in urban areas, farmlands, orchards and all indigenous and exotic forests and scrublands, including scrubby edges of wetlands. They are less common in open grassland areas of Otago. Silvereyes are resident on Stewart, Great Barrier, Kermadec, Chatham, Snares, Antipodes, Auckland and Campbell Islands. Although silvereyes are resident on or regularly visit all vegetated offshore islands, they are only irregularly or seasonally present on islands with high-densities of bellbirds and other passerines, including Three Kings, Poor Knights, Little Barrier and Kapiti Islands.

Silvereyes are common and widespread, often in large flocks in winter.

Silvereyes damage ripening fruit in orchards, including grapes, apricots, cherries and apples. Vineyards are often covered to protect ripening grapes from bird damage, including from silvereyes. On the positive side of the ledger, silvereyes eat aphids (hence the alternative name ‘blight bird’), and are a major predator of overwintering codling moth caterpillars. They may spread weed seeds through ingestion of small fruits and they are known to spread seeds of native trees and shrubs, including kahikatea and coprosmas. Silvereyes assist with pollination of some tree species such as kowhai and fuchsia when feeding on nectar. They have no recognised impacts on native bird species.

Pairs are monogamous and territorial when breeding, nesting between August-September and February, peaking in September – November in most localities. Nests are in the outermost branches of trees, shrubs and treeferns, mostly more than 8 metres above the ground, and are a well-built, delicate cup woven into small branches and comprising moss, lichen, small fine twigs, hair, spider web and thistledown. One or both sexes build nests. Two or three clutches may be raised during a season, with 2-4 eggs per clutch (typically 3). Eggs are pale blue and laid at 24 hour intervals. Incubation is shared by the sexes and takes 10-12 days. Young are blind and naked when hatched apart from two tiny tufts of down on the head. Their eyes open after 4 days, they are well-feathered 10 days after hatching, and fledge at 9-11 days-old. Both sexes feed fledglings.

A gregarious species, silvereyes are well known for flocking especially in winter. They are a mobile species that forages actively for food in parklands, woodlands, suburban gardens, forests and scrublands. Aggressive interactions are common within flocks, with a dominant bird performing rapid wing fluttering and short aggressive chases of other birds. Some local seasonal movement and even migration within the country may occur; for example, a bird banded in Marlborough was recovered in Wellington.

Silvereyes are omnivorous and eat a range of small insects such as aphids, caterpillars and flies, also spiders, gleaned from shrubs and trees. They also feed on a range of small and large fruits including small berries and ripening fruit including grapes, cherries, apples, pears, figs, apricots and peaches. Silvereyes eagerly feed on nectar of native and exotic plants including kowhai, fuchsia, eucalypts and bottlebrushes. They visit bird feeders more than any other species in New Zealand voraciously feeding on fat and lard, especially in winter.

A small songbird with olive-green upperparts, grey hindneck, neck-sides and upper back, dark olive green tail, whitish-cream underparts on the throat and upper breast, creamy grey on the belly and undertail, pinkish-buff flanks, white thighs, and creamy-white on the underside of the wings. Both eyes have a silvery-white ring and dark reddish-brown iris, and the bill and legs are dark brown-black.