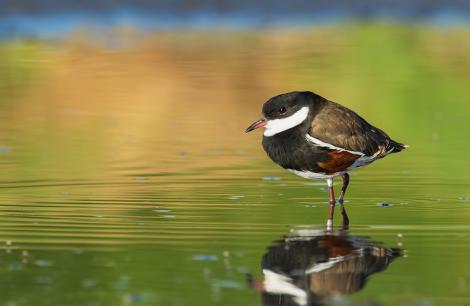 The red-kneed dotterel is a small, distinctively-coloured, long-legged plover, native to Australia and New Guinea. It typically inhabits shores of inland freshwater lakes and swamps, and brackish coastal lakes and lagoons, rather than tidal estuaries. In Australia, they move inland to breed after heavy rains, and then return to the coast as the interior dries out. One vagrant has reached New Zealand.

The adult red-kneed dotterel has a black head to just below the eyes, and a black nape and breast band which contrasts with the white triangle running from the chin and throat up the sides of the neck. The back, wings and tail are brown, with contrasting white feathering in front of the wings. The upper flanks have a chestnut patch, often obscured by the wings. The belly and undertail white. In flight, its brown wings have a broad white trailing edge on the tips of the secondaries and inner primaries. The bill is red with a black tip. The legs are long; pink to just below the “knee” and then grey. The sexes are alike. Juveniles have grey-brown on the head and nape, the breast band is absent or smudgy, and the chestnut flank patch is initially absent. Red-kneed dotterels have a hunched posture when feeding in shallow water or on the shoreline, or running along the water’s edge.

Similar species: the smaller and sleeker black-fronted dotterel has a similar white triangle surrounded by black on the neck and head, but the top of its head, above the eyes, is white and brown, it has a dark carpal bar, and distinctive black wingtips in flight. Shore plover are slightly larger and also have white and brown above the eyes.

Red-kneed dotterels are distributed widely in Australia and southern New Guinea, mainly in the south-east of the Australian mainland. They are nomadic; heading inland to breed following heavy rains and returning to coastal areas as the ephemeral wetlands dry out. Red-kneed dotterels are generally associated with fresh or brackish lakes and lagoons rather than tidal estuaries and beaches. They are vagrant to Tasmania and New Zealand.

Outside the breeding period, red-kneed dotterels are solitary or associate with others in small loose flocks. They are active and run quickly along the water’s edge when searching for prey, or when disturbed. They often feed while wading and will sometimes swim.

A small dumpy plover with long pink-kneed grey legs, a black head, nape and breast band, a white chin and throat, light brown back, wings and tail, white feathers in front of the wings, chestnut patches on the upper flanks, and a white belly and undertail. The longish straight bill is pinkish-red with a black tip.