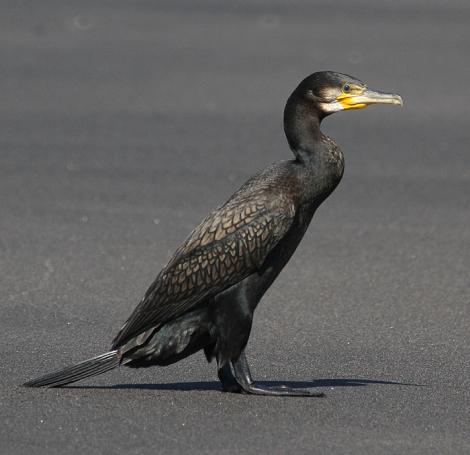 This large, mainly black shag is often seen individually or in small groups roosting on rocky headlands, in trees or on artificial structures. It usually forages alone. Even though readily seen about harbours and estuaries associated with cities or towns, black shags are wary of close approach by people, probably as a result of persecution by fishers and waterfowl hunters.

A large black shag with black-brown wings and tail, and white-cream feathering over cheeks and throat. The skin about the eyes and base of bill is yellow, feet and legs black, bill grey, and eyes green. Adults early in the breeding cycle have the skin below eyes red-orange, white thigh patches, a small black crest on nape and upper neck, and variable amounts of white filoplumes on the crown and upper neck. Juveniles and immatures have black-brown plumage, which fades to sandy brown, and have variable amounts of white on foreneck, breast and abdomen, from none to extensive. Their facial skin is yellow, and eyes grey-brown turning to green.

Voice: generally quiet away from nest. At the nest a variety of calls with marked sexual differences, males having a range of loud raucous sounds, females soft and husky sounds early in the breeding cycle but becoming more like those of males during incubation.

Similar species: little black shag is smaller, more slender with very thin bill and without yellow facial skin. White-throated morph of little shag is much smaller with a short stubby yellowish bill. Juveniles and immatures of black shag can be difficult to distinguish from similar sized juveniles and immatures of pied shag. Both can have underparts nearly all brown to nearly all white; latter have paler face, sides of neck and throat (black shag mainly dark head and upper throat), and lack yellowish facial skin.

The black shag is almost cosmopolitan in distribution, being present in Australasia, Eurasia, Iceland, Africa, the northeast coast of North America and Greenland. It is widespread throughout New Zealand, although sparsely so. It is found from Northland to Stewart Island, and on many offshore and some outlying islands, including the Chatham Islands. It is a vagrant to Macauley Island (Kermadec Islands), and the subantarctic Snares, Auckland and Campbell Island groups. Black shags are found in a variety of habitats, including coastal waters, estuaries, harbours, rivers, streams, lakes and ponds, including up to the subalpine zone.

While counts of black shags, along with other wetland species, have been undertaken at a few harbours and lakes, no attempt has been made to carry out a national count of the species or to locate all colonies and determine the number of nesting pairs. However, the population in 2012 was estimated to number 5000-10,000 mature individuals.

Black shags were persecuted for decades by fishers who believed that they ate large numbers of trout. While few black shags are shot these days, it still occurs occasionally. The eggs and nestlings of tree-nesting black shags seem not to be preyed upon by possums, rats and stoats. However, the species is sensitive to disturbance by people and will leave nests when closely approached. Black shags swallow fish on broken-off portions of snagged fishing lines. If the lines come free, some birds are found dead with hooks penetrating the gut, or caught up at tree roosts by sinkers or hooks from these lines. Set-nets left unattended in estuaries and harbours occasionally result in black shags drowning.

Timing of nesting by black shags depends on whether the colony is at a coastal or inland site, and whether it is a pair’s first nest of the season or a replacement for an earlier failed attempt. Therefore, while most pairs lay clutches in autumn-winter, it is possible to find black shags nesting in any month. Colonies occur on trees or shrubs, on the ground in swamps, coastal cliffs and headlands, and on artificial structures. Nests, often used repeatedly over several years, are mostly made of sticks, twigs and foliage. Clutch size is typically 3-5 eggs. Both members of the pair incubate the eggs and care for the young. Chicks start flying at 7-8 weeks of age, and continue to be fed by their parents for a further 5-11 weeks.

While a few juveniles disperse widely (one banded at a Lake Wairarapa colony was recovered on Lord Howe Island), adults tend to remain year-round within a few kilometres of where they nest.

Generally black shags feed alone, but they occasionally form into flocks to forage cooperatively where prey is abundant. They sometimes forage in highly turbid waters, and even forage at night in mid-winter at high latitudes. Black shags have also been recorded wading in shallow streams searching for prey under pebbles. They forage mainly in water less than 3 m deep, dives averaging 21 seconds, with 7 seconds between dives. Black shags have poor aquatic visual acuity, and so may locate prey by touch using the bill (prey-flushing strategy) or detect prey visually at very short distances, and then possibly rely on the rapid extension of their long necks to capture food without an energetically expensive pursuit.