Geographical variation: The taxonomy of the oriental cuckoo is much debated. More than one subspecies may reach Australia, and New Zealand specimens have not been assigned to subspecies. 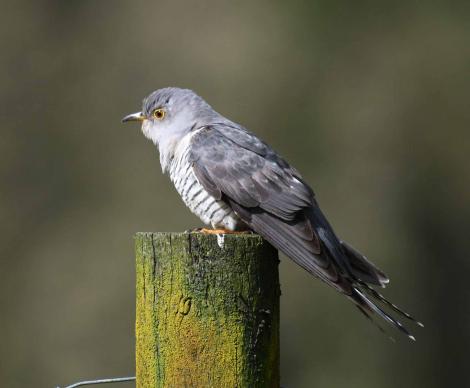 The oriental cuckoo is one of four ‘foreign’ cuckoos that occasionally find their way across the the Tasman Sea to New Zealand. Unlike the three other species (pallid cuckoo, fan-tailed cuckoo and channel-billed cuckoo), the oriental cuckoo does not breed in Australia. As its name suggests it breeds in Asia, from Japan and Korea right across Siberia to the eastern edge of Europe. After leaving small warblers (e.g. willow warbler and chiffchaff) to care for its eggs and young, the oriental cuckoo spends the non-breeding season over a vast area between Malaysia and Australia, with occasional birds continuing on to New Zealand.

The oriental cuckoo is a slender, medium-large cuckoo, about the size of a blackbird. Its proportions and shape are reminiscent of a small falcon. The plumage is variable, either dark grey, or rufous with heavy barring on the back, but all forms have white underparts that are heavily barred with black. The main colour morph of adults, including all males, has a smooth grey head and neck strongly demarcated from the heavily-barred breast and belly. The upper wings and back are dark grey, and the long, dark grey tail has bold white barring. The eye-ring, bill base and feet are bright yellow. The rarer rufous morph (females only) has also reached New Zealand, e.g. Raoul Island. This morph has a pale chin and face, with dark barring extending all the way from the chin to the undertail. The crown, nape, back, rump, upper wings and tail are rufous, strongly barred with dark brown. The soft parts are yellow, as for the grey morph.

Voice: oriental cuckoos are generally silent in Australia and New Zealand, but a bird on Little Barrier Island (October 1971) uttered a quiet tsoo-tsoo-tsoo about a dozen times, at 1 second intervals.

Similar species: shining cuckoo has similar bold barring underneath, but is metallic green above, and half the size. Pallid cuckoo is similar in size and shape, but is paler, with barring confined to the undertail.

The oriental cuckoo has a huge breeding range across northern Eurasia east to northern China, Korea and Japan. Its non-breeding range is similarly vast, including Malaysia, Indonesia, the Philippines, New Guinea, and western Micronesia. It is a non-breeding migrant to northern and eastern Australia and a straggler to New Zealand. They are found in a range of open forest types and in farmland with scattered trees. In New Zealand, most oriental cuckoos have been recorded from lightly forested areas, with some in suburban gardens.

There have been about three dozen records of oriental cuckoos from New Zealand, including 15 since 2000, meaning that, on average, one bird reaches New Zealand every year. Sightings have been distributed throughout the main and offshore islands from Raoul Island, Kermadec Islands in the north (December 2010) to the Snares Islands in the south (December 1986). The most recent record was from Lake Mapourika, Westland (November 2021). All records have been between October and April, which is when oriental cuckoos migrate to Australia between breeding seasons.

The oriental cuckoo is a brood parasite, mainly choosing to lay its eggs in the nests of Eurasian warblers belonging to the genus Phylloscopus (including the Arctic warbler, willow warbler and chiffchaff).

The oriental cuckoo mainly stays inside tree foliage, and can be difficult to see. In New Zealand, some birds have perched in the open, e.g. sitting on fence posts, and swooping to the ground to catch earthworms and insects, before returning to the same perch. They are often mobbed by other birds.

King, B. 2005. The taxonomic status of the three subspecies of Cuculus saturatus. Bulletin of the British Ornithologists' Club 125: 48-55.

A medium-large, long-tailed, hawk-like cuckoo with dark grey or heavily-barred rufous on the back and white underparts heavily barred with black. The eye-ring, bill base and short legs are yellow, and the decurved bill and eye-stripe black.