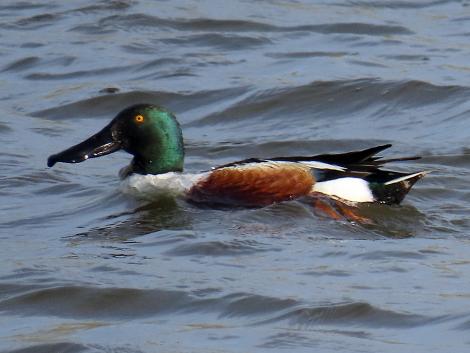 The northern shoveler is a migratory duck that breeds in temperate regions across the entire Northern Hemisphere. A few birds stray south of the equator when on migration, including at least 30 records from New Zealand. All but one of the New Zealand records are of males in their distinctive white-and-chestnut plumage with bottle-green head, with several of these birds shot by duck hunters. The drab females are very difficult to separate from female Australasian shovelers, and so it is likely that many northern shovelers are overlooked in New Zealand.

Voice: the drake has a double quack; the female’s call is similar to a mallard’s.

Similar species (adult males only): the Australasian shoveler is similar in size and shape. The drake Australasian shoveler has a blue-grey head with a vertical white crescent at the base of bill. But note that male northern shovelers in ‘eclipse’ plumage (a plumage attained for a short time after the breeding season) also may show a pale crescent on the face, as well as a speckled breast. The drake mallard has a similarly green head but has a dark maroon-brown breast and yellow bill.

The northern shoveler is a long-distance migrant, that breeds across the entire Northern Hemisphere. It spends the northern winter mainly in the northern tropics and warm temperate areas immediately to the north. Asian populations winter throughout East Asia south to Thailand, with occasional records further south including Borneo and Australia. The East Asian population is estimated at 500,000 birds.

There are about 30 northern shoveler records from New Zealand, with an influx of at least five males in breeding plumage in 2017. Some birds were still present in 2020. All but one of the records were of the readily recognisable drake (there was a pair at Pauri Lake, Whanganui, in August 1989).

It is likely that shovelers are suffering from habitat loss and degradation in Asia. They are reported as not good to eat as they have a poor flavour compared to other surface feeding ducks, thus hunting pressure is comparatively low. As for all vagrant bird species, northern shovelers are fully protected in New Zealand. This apparently makes little difference come the first weekend of May.

The nest is a scrape on the ground lined with grass and down. The female alone incubates the 9-14 eggs and cares for the young.

Northern shovelers feed from the surface, filtering items from the water with fine comb-like ridges on the inside of their bills.