Geographical variation: None now recognised but formerly considered a separate subspecies (A.r. variegata) from that in Australia (A.r. rhynchotis). 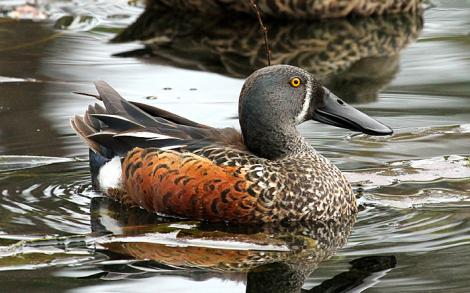 Shovelers are specialist filter-feeding waterfowl with a large spoon-shaped or shovel-shaped bill that is almost twice as broad at its tip than at its base and which is the bird’s most conspicuous feature. Fine lamellae extend along most of the edge of the upper mandible and it is by pushing water through this lamellae curtain that small plankton and fine seeds are extracted.

Australasian shovelers are sexually dimorphic. The males are highly coloured most of the year, when they have a blue-grey head and neck with a distinctive white crescentic band at the base of its large spatulate black bill. The breast is a mottled brown and white after breeding but becomes progressively pure white as the nuptial moult proceeds during May. Its chestnut flank is offset by a large white patch at the tail base. The eye is yellow and the legs bright orange. Females are uniformly mottled light brown with dull brown bill and eye, and brown-orange legs. In flight  Australasian shovelers have a distinctive profile with a ridiculously large bill, sharp pointed wings and very rapid wingbeats. The blue, white and green patches on the upper wing contrast with the white underwing.

Voice: Australasian shovelers are rarely vocal. Displaying males have a rapid “chuff-chuff” call, and females may give a typical descending quack quack quack….

Australasian shovelers are widespread throughout the North and South Islands, rarely on Stewart Island. They are no longer resident on the Chatham Islands, but reach there occasionally as vagrants, and also once to the Snares Islands (May 1997) and Auckland Islands (Cape Expedition, World War II).

Shovelers mainly occur on large freshwater wetlands but may also be encountered in sheltered estuaries and brackish lakes. They also make seasonal use of dune lakes, temporary wetlands, and sewage ponds.

There are no reliable national estimates for the Australasian shoveler population, but it is probably in the order of 15 - 30,000 birds. Fish & Game New Zealand’s annual survey of about 250 lakes nationwide to monitor population trend recorded a small and steady decline over 2000-2011.

The Australasian shoveler is a gamebird with an estimated annual kill of 6500 (2011), half of which usually occurs in Otago and Southland. Eutrophication of lowland wetlands has probably provided more feeding habitat, but intensive pastoral farming has undoubtedly diminished breeding habitat.

Shovelers perform spectacular communal courting at selected and traditional lakes in July and August, at which time flocks comprise approx. 60% males. Pairs prospect small and secluded ponds and drains as breeding and feeding territories, and nesting occurs in October, which is later than for all other waterfowl. Males vigorously defend territory and mate until the female has completed about half of her incubation period of 24 days. Nests are usually situated in long grass near water. Clutches are of 5-13 (mean 10) whitish eggs and, upon hatching, the ducklings are raised solely by the female over about 8 weeks. Broods are rarely active or conspicuous during the day.

The Australasian shoveler is a highly mobile species with many birds probably traversing the length of New Zealand annually before returning again to their breeding areas. Survival rates (0.61 - 0.72 per annum for males, 0.40 - 0.51 for females) and extent of movements are influenced by the phase and intensity of the El Niño Southern Oscillation weather system. For example, for shoveler breeding and moulting in Waikato, El Niño conditions induce lower survival and increased movement out of the district, whereas similar conditions are associated with higher survival and decreased movement of birds in Otago and Southland. The reverse applies under La Nina conditions.

Like other shoveler species, Australasian shovelers moult communally in large numbers at very few places and generally occur in flocks for most of the year.

Australasian shovelers feed mostly by filtering surface water or mud through their bill lamellae. They occasionally will upend to feed on the wetland floor. A wide range of small freshwater molluscs, crustaceans and insects are taken and small seeds of many aquatic plants also. Most feeding is done in open water rather than at the wetland margin.

A medium-sized dabbling duck with a large black spoon-shaped bill, yellow eyes and orange legs. Breeding plumage males have a blue-grey head and neck with a white crescent at the base of the bill, mottled brown and white breast, chestnut flanks, and a white patch at the tail base; females are mottled light brown with a dull brown bill and eyes, and brown-orange legs.