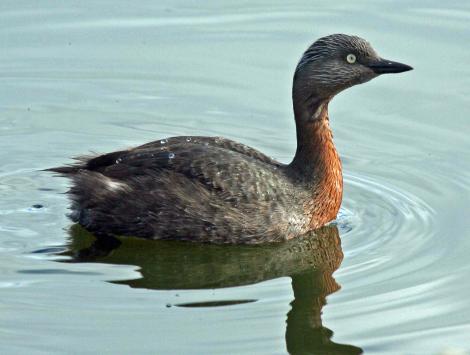 Grebes are small to medium-sized aquatic diving birds that use large, powerful lobed feet set far back on their body to propel and steer themselves in water. They have relatively long necks and are notable for their submarine-like ability to change their buoyancy. The New Zealand dabchick occurs on small lakes and sheltered inlets on larger lakes from Northland to the north of the South Island. Formerly widespread in the South Island it declined through the 1800s and 1900s until becoming extinct there as a breeding species in 1941. The reasons for this are not fully understood, although predation by introduced predators is likely to have been a factor. In 2012, a pair was recorded breeding near Takaka at the top of the South Island.

A relatively small, brown-black grebe distinguished by dark glossy head streaked with swept-back fine silvery feathers and prominent yellow eyes. In breeding plumage the front of the neck and breast are rich rufous red. The rest of the rotund body has dark brown-black upperparts and paler underparts with white underfeathers. The tail is little more than a tuft of black silky feathers a few centimetres long. Adults are paler in non-breeding plumage. The eyes are yellow, and the thick olive-grey legs have yellow on the inner side and edges of the feet. The short black bill tapers to a point. Sexes alike. Chicks hatch with irregular heavy black-brown horizontal striped markings on a white background, and a bright red bill with black markings. Juveniles retain striped markings on the head and neck until adult plumage develops; bill becomes black with age.

Voice: adults give short chattering calls during breeding season and occasionally when alarmed.

The dabchick has a patchy distribution in the North Island from Northland to Wairarapa. Most birds inhabit freshwater lakes and ponds on the volcanic plateau, Rotorua Lakes area, Northland, Hawke’s Bay and Wairarapa. Formerly widespread in the South Island, it declined through the 1800s and 1900s until becoming extinct there as a breeding species in the 1940s. In 2012, a pair began breeding near Takaka in the north-west of the South Island, and a pair bred near Blenheim in 2015. Breeding birds favour shallow waters with dense vegetation on small freshwater lakes and pools, sand-dune lakes and lagoons, and larger inland lakes with shallow, sheltered inlets up to the size of Lake Taupo, from sea level to 740 m altitude. Non-breeding birds flock on more open freshwater bodies.

The small fragmented population is probably declining due to continued threats. Reasons for the decline are not fully understood, but predation by introduced predators is likely to have been a factor along with declining water quality, loss of natural habitat and increased disturbance. Extensive and widespread wetland drainage in the past reduced the availability of suitable natural habitat, although since 1940s more artificial habitat has become available such as farm dams and stock water supplies. Nests on lakes are vulnerable to increased disturbance by boats, jet-skiers and water-skiers.

Breeds year round. Territorial displays begin June-July with egg-laying mainly during August-February. Solitary pairs nest on freshwater lakes and pools, anchoring the nest to aquatic vegetation or building it in a small cave, partially underwater. The nest is a loose pile of aquatic vegetation up to 1 m deep from lake bed to water surface. Elaborate courtship involves preening, rearing, head-turning and -shaking, and ritualised displays of diving and pattering. Monogamous; 2-3 bluish eggs laid August-March, staining brown in nest. Incubation takes 22-23 days, and chick-rearing about 70 days, with both parents assisting. Chicks ride on parents' backs for the first week and much of the subsequent two weeks until they become too big to carry by the fourth week. Juvenile continues to be fed by parental birds until c.70 days. Second nestings recorded.

Like other grebes, the New Zealand dabchick has a submarine-like ability to change its buoyancy, which it does by adjusting the angle at which its dense waterproof feathers are held against the body. Aggressive territorial behaviour directed at intruders includes the head being lowered forward, neck and back arched, half-raising of wings, and short rushes or low pattering flights towards the intruding bird. Appeasement display includes head-bobbing up and down, side to side, or back and forth, with diving as a last resort to escape. Uses "stern-on" posture that involves raising of the rear-end and fluffing up of rump feathers to display a white 'owl-face' pattern on each side of the tail feathers. This is thought to be a territorial advertisement that may also convey mild alarm in the presence of a potential threat. Mostly flies at night with birds able to cross large water bodies, including Cook Strait. DNA studies show it forms a super-species with the hoary-headed grebe of Australia. There also appears to be a relationship between this genus and Rollandia of South America.

Mainly eats aquatic invertebrates, such as insects and their larvae, which it pecks from the surface or catches from the air. Also eats small freshwater fish and crayfish, shellfish and leeches, which it catches during dives up to 30 seconds long.