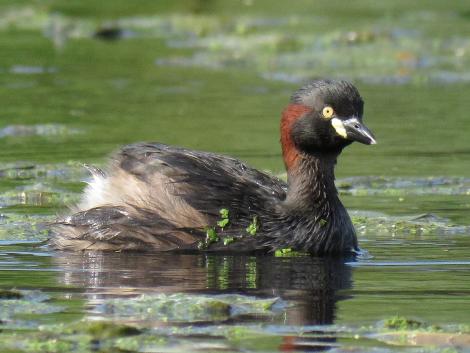 Grebes are small to medium-sized aquatic diving birds that use large powerful lobed feet set far back on their body to propel and steer themselves in water. They have relatively long necks and a submarine-like ability to change their buoyancy. Australasian little grebe occurs on small lakes and farm ponds. The smallest of four grebe species that occur in New Zealand, it is a recent coloniser from Australia with the first breeding record from Diamond Lake near Wanaka in 1977. Since then it has established a small breeding population centred around Northland and until c.2000 in Canterbury (where it has since died out). It is closely related to the little grebe of Eurasia and Africa.

Since first recorded breeding on Lake Diamond near Wanaka in 1977, the Australasian little grebe established small breeding population centred around Northland, the Rotorua Lakes area and Canterbury. There has been a notable increase in range from Northland to Auckland and the Rotorua Lakes area in recent years, but no records from the South Island since 2008. Reduced ground water levels in parts of Canterbury caused some ponds where they bred to dry up. Favours small reed-fringed freshwater lakes, dune lakes and farm ponds rather than large lakes.

The global population is an estimated 25,000-1 million. The New Zealand population was estimated at 50 individuals in 1995.

As the Australasian little grebe is abundant in Australia, the small colonising population in New Zealand has not been the focus of any conservation effort. Its preference for small water bodies that may be susceptible to drying up means that there are few sites where they are continuously present in New Zealand.

Inhabits small shallow freshwater lakes, sand-dune lakes and farm ponds, usually in pairs. May form small flocks outside breeding season. Has submarine-like ability to change its buoyancy, which it does by adjusting the angle at which its dense waterproof feathers are held against its body. This ability allows it to swim high or low in the water and to dive frequently. It can also sink silently beneath the surface when alarmed and use its relatively long neck and head as a 'periscope'. It also 'snorkels' at the surface with its neck and head submerged in search of prey. Aggressive territorial behaviour directed towards intruders includes an upright attack posture with neck held erect, head feathers ruffled and tail tuft cocked; a forward leaning display posture with head and neck extended low over the water, feathers ruffled and wings folded; and water-kicking, splash-diving and token-diving. Appeasement displays include holding head and bill low in the water with neck held slightly forwards and the rear-end underwater. Swallows small feathers to help form pellets to combat gastric parasites. Mainly flies at night.

In Australia eats mainly small fish, snails and aquatic insects which it catches during dives, as well as vegetation and small frogs. The diet is likely to be similar in New Zealand.

Jaensch, R. 2012. Detailed data and notes on numbers and trends of waterbirds in Australia and other parts of the Oceania region. Wetlands International - Oceania (5th ed), Waterbird Population Estimates.