Geographical variation: The breeding populations on the Kermadec Islands and Norfolk and Lord Howe Islands are of the subspecies S. d. tasmani, also known as the Tasman booby 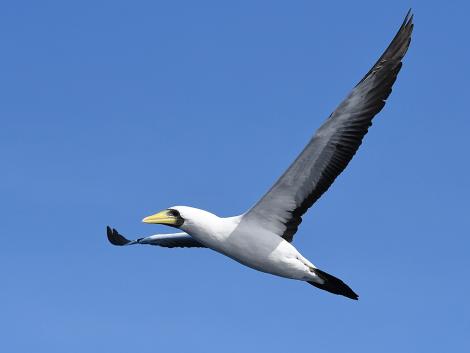 The masked booby is a large, white gannet-like tropical seabird with black trailing edges to the wings, a black tail and yellow bill. The dark facial skin surrounding the eyes and bill resembles a mask. Masked boobies range widely over tropical and subtropical open ocean, feeding mostly by plunge diving. When these birds are sighted close to land, it is usually a sign of a breeding location. Some individuals remain close to their breeding grounds and defend these throughout the year. The breeding distribution of the masked booby includes tropical oceanic islands around the world. The New Zealand indigenous subspecies also breeds on Lord Howe and Norfolk Islands.

The adult masked booby resembles a small gannet that is lacking the yellow head markings. The neck, body and wings are long and slender, and the tail is long and wedge-shaped. The plumage is pure white, apart from black flight feathers on the trailing edge of the entire wing, and black tail feathers (though the central tail feathers can be white). The long straight serrated bill is yellow. Foot colour can vary between individuals from greyish-green over olive to yellow. The species’ name is derived from the dark grey-blue, almost black, facial skin, which is reminiscent of a mask. The Tasman booby is distinguished from other subspecies by its dark brown iris and longer wing; the irides of other subspecies of masked booby are yellow.

The plumage of juvenile masked boobies is mostly grey-brown above and on the head, with a lighter mottled belly, underside of the wings, and collar. The feet and bill are not as brightly coloured as in adults, with a blue-green tinge to the yellow tones. Immature birds show an increased proportion of white in their plumage compared with the juveniles, particularly a lighter-coloured head.

Voice: sexually dimorphic; the adult male produces a high-pitched descending whistle, the female a honk or a croak. Both types of vocalisations can be produced as a single call or as a series of calls. Juvenile calls resemble the voice of the female.

Masked boobies breed on offshore islands all around the tropics, and have a widespread distribution at sea extending into the subtropics. The proximity of breeding grounds to clear, deep waters is important. In New Zealand, masked boobies breed only on the Kermadec Islands, and are a rare vagrant to the coasts of the North Island.

Masked boobies prefer to nest on unvegetated wind-exposed level ground such as on cliff tops and island plateaux, or, in other parts of the world, low-lying cays and atolls. The foraging habitat is the open ocean, where prey is caught by deep-plunging.

About 100 pairs of masked boobies nest on the Kermadec Islands, 100s of birds on Lord Howe Island, and around 900 birds on the Norfolk Islands. The total population for the subspecies is probably fewer than 2000 individuals.

Masked boobies mostly breed in loose colonies with very low densities of nests. The pair bond is monogamous, and mates are often retained across several seasons. The pairs defend their breeding territories, often re-using the same nest spot over several years. Both sexes share incubation as well as brooding and chick rearing. The eggs are incubated under the webs of the feet. The first-hatched chick expels its sibling from the nest, typically within the first days after its hatching. Exceptionally, both chicks have been observed to survive for several weeks. The chick is brooded for the first 3-4 weeks, and is fed by incomplete regurgitation by both parents, right through to about 4-8 weeks after fledging.

Masked boobies forage solitarily or in pairs or small groups at sea, mostly over deep water, and sometimes large distances from breeding colonies. Nutrient-rich upwelling zones are often important feeding grounds. Masked boobies typically deep-plunge for their prey. They are also capable of shallow plunges and occasionally take flying fish on the wing. On land, the masked booby shows a suite of agonistic, territorial behaviours. These include out-posting, leaning forward, bill held high, to mark its nest site against incoming birds; yes-no headshaking, also with the bill held upwards against approaching birds; and wing-flailing and jabbing against intruders at the nest. Skypointing is used in two contexts: to indicate take-off, or during advertising for a mate. Behaviours of pair formation include parading, mostly by the male, intent gazing, mandible clashing between mates in ritualised mutual jabbing, and symbolic nest building.

A landing call is produced when incoming to the nest site; at sea, a high-pitched call occasionally precedes the descent for prey capture. Birds are very vocal at the colony, both during agonistic and pair-bonding behaviours.

Masked boobies eat fish, squid and octopi. Fish species taken include flying fish, needlefish, and various perciforms, also flying squid and other cephalopods. Few data are available on the prey of birds breeding on the Kermadec Islands, although flying fish have been reported.

A large white-bodied seabird with long slender neck, body and wings, long wedge-shaped tail, long straight serrated yellow bill, dark brown iris and dark grey-blue facial skin. The flight feathers on the trailing edge of the wing and the tail feathers are black, although the central tail feathers can be white.

Adult and chick at nest