There are four sub-species of the brown booby; the sub species S.l. plotus occurs throughout the tropical Pacific Ocean, and is the form recorded from New Zealand. 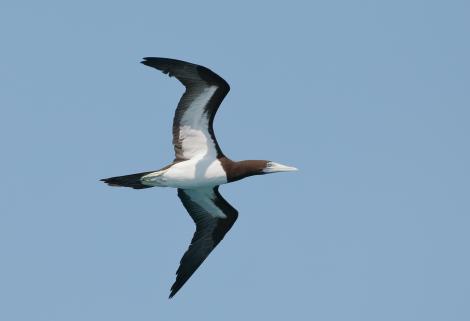 The brown booby is a large, chocolate-brown-and-white seabird related to the gannets. It is slightly smaller than a gannet, and similar to one in shape and behaviour, if not colour. Vagrant brown boobies reach New Zealand waters most years, mainly around the northern North Island, but also frequently around Nelson and Golden Bay. They often enter harbours, or roost alongside gannets at their colonies.

Female brown boobies are slightly larger than males, with an approximate wingspan of 150 cm and average weight of 1.3 kg (140 cm and 1.0 kg for the male). The head, neck, back and top side of wings are a uniform chocolate brown in colour. The brown finishes abruptly across the breast, with the belly and undersides of the wings being white, apart from broad brown edges to the underwing. The legs are yellow shading slightly green. The bill is long and conical. Facial skin colour differs between the sexes, with the male having blue skin and blue-grey bill and the female yellow skin and the bill yellow shading to grey. Immature and juvenile birds differ from adults in having the underparts mottled brown or grey, though still sharply separated from the chocolate brown breast and upperparts.

Similar species: juvenile Australasian gannet and masked booby are both predominantly brown, but are much paler than juvenile brown boobies, especially on the hind neck, and lack the chocolate brown hood extending to the upper breast, sharply demarcated from the paler underparts. Brown morph red-footed boobies do not have a sharp demarcation line across the breast (this is prominent even in juvenile brown boobies).

Brown boobies have a wide distribution over tropical seas of the Indian, Pacific and Atlantic Oceans, plus the Caribbean Sea. The closest breeding sites to New Zealand are islands and cays of the Australian Great Barrier Reef.

There have been dozens if not hundreds of sightings of brown boobies in New Zealand since the first record at Napier in July 1888. Most records have been from the Hauraki Gulf and Northland, with multiple records among the gannets on Horuhoru Island (north-east of Waiheke Island) and at Muriwai. Other sites with multiple records include Houhora Harbour, Nelson, and the Farewell Spit gannet colony. The southernmost record was off Stewart Island, in March 2015. Three birds were seen together at L'Esperance Rock, Kermadec Islands in March 2016, and another three at the Muriwai gannet colony in May 2016.

Brown boobies are not a threatened species, but many breeding colonies are subject to human disturbance, and rats may take chicks and unguarded eggs.

Brown boobies feed solitarily or in small groups. They can form large rafts sitting on the water when resting. Most New Zealand sightings have been of single birds. Males tend to call with a whistling sound but seldom when in flight, whereas females have a honking call particularly when nesting. Brown boobies are often seen close but rarely over land. Flight height is usually up to 30 metres with most plunge-diving carried out from 15 metres or less. They typically dive at a shallower angle than gannets. Brown boobies also chase flying fish (their major food item) while they are airborne, catching the fish either in flight or as they re-enter the water. Other fish and squid are also taken by plunge diving.

A large brown and white seabird with a long conical bill and variable facial skin colour, with males having blue skin and blue-grey bill and females yellow skin and a yellow-grey bill. The head, neck, back and upper wings are uniform chocolate brown which ends abruptly across the breast which along with the belly and undersides of the wings are white; underwing has broad brown edges.