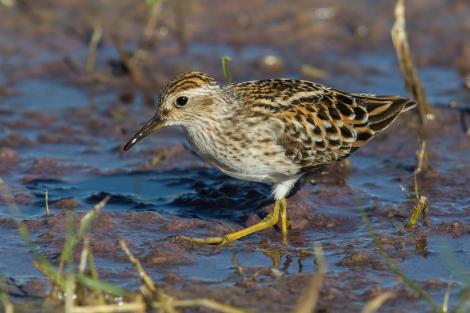 Stints are the smallest of the migratory waders, barely the size of a sparrow. One species of stint – the red-necked – is an annual migrant to New Zealand, and Lake Ellesmere is the single most important New Zealand site for these diminutive waders. Occasionally a different species of stint arrives with these birds, providing a challenge for local birdwatchers, as the stints (or ‘peeps’) includes several very similar species pairs. One such pair is the ‘yellow-legged’ stints: the long-toed stint from Eurasia and the least sandpiper from America. Each has been recorded from New Zealand on one or two occasions, but there are several additional records of stints with yellow legs from New Zealand that were not able to be assigned to species. The two accepted records of long-toed stints were birds at Lake Ellesmere in August-September 1997 and December 2000. About 200 long-toed stints reach Australia each year.

The long-toed stint is a tiny delicate wader with pale yellow-green legs. Its markings are very like a miniature sharp-tailed sandpiper, with a rufous cap, prominent pale supercilium, variegated rufous, black and buff back and wings, speckled breast and white underparts.

Long-toed stints breed in subarctic Siberia, and migrate to non-breeding areas in South-east Asia and, less commonly, Australia, where around 200 arrive each year. They can be found in saline, brackish or freshwater habitats.

The global population of long-toed stints is estimated to number more than 25,000 individuals.

New Zealand’s first long-toed stint was seen among red-necked stints at Lake Ellesmere on 31 August and 25 September 1997. The second bird was seen and photographed by a single observer at the same site on 6, 7 & 16 December 2000.

Long-toed stints breed during June-July as isolated pairs near pools, in boggy wetlands, or on mountain tundra south of 50° North. Their long toes and light bodyweight allow them to walk on floating vegetation. They are mildly gregarious, foraging singly or in small groups, and rarely up to 50 birds together.

Calls from two bird whilst feeding