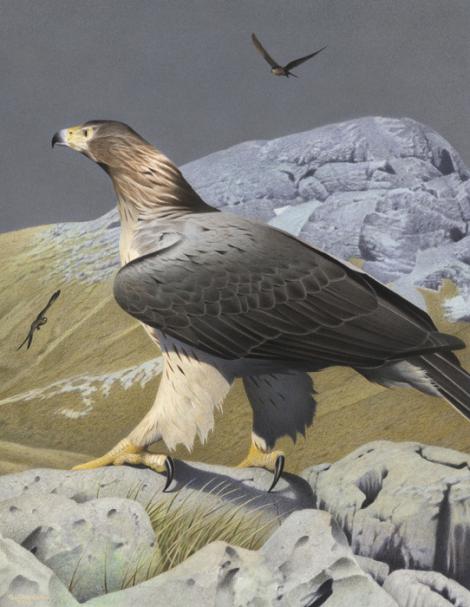 This giant endemic eagle was the largest predator among New Zealand's prehistoric fauna. It is the largest, heaviest eagle species yet described, weighing up to 17.8 kg and had a wingspan up to 3 metres. Near-complete skeleton finds show that it had the body and wings of a giant eagle, legs and bill larger and stronger than the largest living vulture species, and feet and claws as big as a modern day tiger's. These characteristics made it the top predator in prehistoric South Island terrestrial ecosystems. Like the iconic moa, Haast's eagle evolved through - and survived - multiple glacial periods, when larger body size would have increased survival chances. The species was named after Julius von Haast, first director of Canterbury Museum.

Morphological study suggests it specialised in hunting moa up to the size and weight of adult South Island giant moa (up to 3.6 m and 249 kg). Study of near-complete skeleton finds suggests it dived on its moa prey from a high isolated treetop perch or rocky outcrop in open terrain. Bone remains show it would have been able to kill moa by flying into their hind quarters and grappling the moa with its large feet and talons before crushing the moa's skull with an extremely powerful grip. Haast's eagle became extinct 500-600 years ago, around the same time that New Zealand's moa species became extinct. Centuries-old cave drawings of huge eagle-like birds and finds of Haast's eagle bone tools in middens strongly suggest it was known to Maori, and may have been hunted. Maori oral tradition records huge birds called "pouakai" and "hokioi" that were possibly inspired by it. Haast's eagle was large enough to attack human children, as described in Maori oral tradition.

A robust, large-bodied eagle with proportionally large head, bill, legs and talons. The vulture-like bill was up to 130 mm long, and the thick talons were up to 75 mm long. The wingspan of Haast’s eagle was up to 3 m, body length was up to 1.4 m, and adults stood up to 90 cm tall. As with other eagles, the male was smaller than the female. Maori oral tradition from the late 1800s records that it had red, black and white plumage with "black feathers tinged with yellow or green" and "a bunch of red feathers on its head".

Similar species: the much smaller Eyles' harrier, which (in the North Island) reached the size of a small golden eagle.

One study estimated the prehistoric total population at 3,000 - 4,500 breeding pairs.

Haast’s eagle became extinct 500-600 years ago, around the same time that all moa species became extinct. Overhunting of its moa prey by humans was probably the main cause of its extinction. Loss of habitat due to the burning of South Island dry mosaic forests and shrublands by humans may also have caused declines in its prey species. Haast's eagle may also have been hunted by humans because its bones, some of which had been worked into tools, have been found in middens. Two claimed sightings from the 1800s are unlikely to have been Haast's eagle.

Behaviour unknown. The largest individuals were markedly larger and almost twice as heavy as the largest living eagle species: the South American harpy eagle (<9 kg; c2.2 m wingspan) and north-east Asian Steller's sea eagle (<9 kg; c2.5 m). It is the only known example of an eagle species becoming the top predator in a complex ecosystem. Bone evidence shows its upper leg muscles were more suited to perching than walking. Damage found on ancient moa pelvis bones suggest that the eagle’s bill was long enough to reach the kidneys. Its body mass was greater, and its head and bill larger, than the Eurasian black vulture. Its long, muscular toes and long, thick, sharp talons were able to drive points through moa pelvis bone. DNA study shows it evolved from a common ancestor of the Australian little eagle, 700,000 to 1.8 million years ago. The suggested 10-15 fold increase in the average weight of Haast's eagle over that period would represent the largest, fastest evolutionary increase in average weight of any known vertebrate species.

Giant eagle with large wingspan, head, bill, legs and talons. Maori oral tradition records that it had "black feathers tinged with yellow or green" and "a bunch of red feathers on its head".