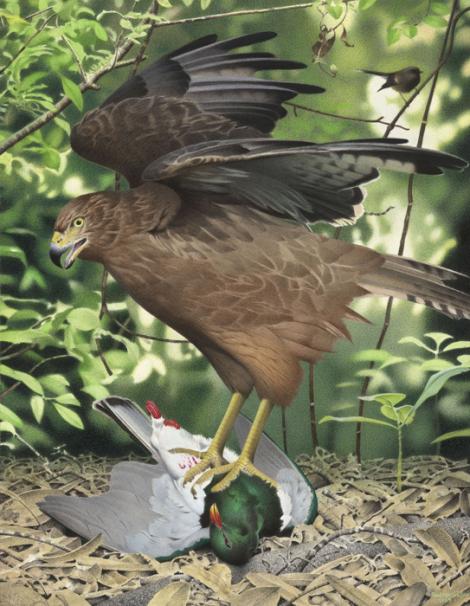 This largest of all harrier species was named after James Eyles, former director of the Nelson and West Coast Museums. It was the size of a small eagle, had the body structure of a giant goshawk, and highly directional hearing like an owl. Prior to its extinction it was the top predator in the North Island terrestrial ecosystem, and was second only to Haast's eagle in the South Island. The small wings and powerful legs and talons of Eyles’ harrier suggest that it was a fast flyer, capable of hunting flighted birds in forest habitats. Its favoured prey was the New Zealand pigeon, but North Island birds were large enough to prey on moa species up to 40 kg. Eyles’ harrier became extinct soon after Polynesian arrival, probably due to a combination of habitat destruction, a decline in prey species, and human hunting. Introduced mammals (the Pacific rat and Polynesian dog) may have preyed on chicks.

Giant, goshawk-like harrier, the size of a small golden eagle. Estimated to be up to four times heavier than the swamp harrier, with feet and talons that were approximately 50% larger. It is unlikely that these two harrier species co-existed in New Zealand, as swamp harrier remains started to appear in the fossil record about the time that those of Eyles’ harrier disappeared.

Pre-human bone remains show that Eyles’ harrier was widespread in dry forest and shrubland from Canterbury northwards in the South Island, and from the Wairarapa to the Coromandel Peninsula in the North Island, from sea level to the subalpine zone.

Thought to have became extinct in prehistoric times due to a combination of human-induced impacts. Its forest and shrubland habitat was burned off by humans and replaced with grassland, predation by introduced Pacific rats probably caused a decline in its prey species, and hunting by humans is apparent from the presence of harrier bones in middens, and use of its bones to make tools. The Pacific rat and Polynesian dog may have preyed on its chicks. Unlike the now-abundant swamp harrier, Eyles' harrier was probably too heavy and small-winged for the gliding and soaring necessary to hunt productively over open grassland areas.

Finds of prey remains in rock shelters and cave entrances suggest that Eyles' harrier may have nested at such sites where available.

The skull structure of Eyles' harrier suggests it had highly directional owl-like hearing. Until human arrival, it was the top predator in the North Island terrestrial ecosystem, and was second only to Haast's eagle in the South Island (Haast’s eagle was apparently confined to the South Island). The larger North Island form of Eyles' harrier was approximately the size and weight of the smallest living golden eagle subspecies. It had relatively compact wings and powerful long legs, feet and talons, indicating that it hunted like a goshawk, hunting fast-moving prey in forest habitats.

A giant goshawk-like harrier the size of a small eagle with very long legs and relatively compact wings. It was up to four times heavier than the swamp harrier.