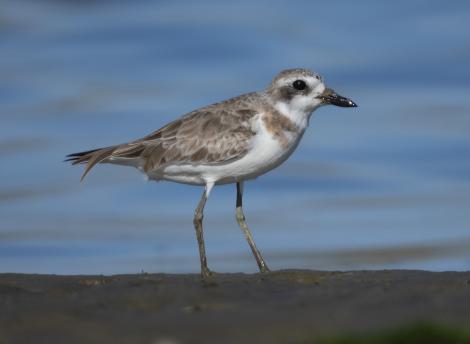 The two sand plovers (lesser and greater) are notoriously difficult birds to identify correctly. They are both between a banded dotterel and a New Zealand dotterel in size, but both are plain grey-brown above and white below in non-breeding plumage, compared to more mottled warm brown and often buff or reddish brown underparts of the New Zealand birds. Important characters to separate the two sand plovers include overall size, leg length, bill size and shape, and head shape. The greater sand plover is the larger in all parameters, with a more angular (cf. rounded) head shape, and a more bulbous tip to the bill.

Most greater sand plovers seen in New Zealand are in non-breeding plumage when they are grey-brown above and white below with a dark partial breast band, and a mainly brown face with a slight pale eyebrow stripe. The underwing is mainly white, and the upperwing has a prominent white wingbar. The bill is long, dark and heavy, with a bulbous tip, and the long legs are greenish-brown.

In breeding plumage, greater sand plovers have a chestnut breast band, and a white face and forehead with black brow and eye stripe.

Similar species: New Zealand dotterel is slightly larger and bulkier, with relatively shorter legs. Most birds have orange-brown suffused underparts, but juveniles can be as pale as greater sand plovers. Lesser sand plover is smaller but similarly coloured. In breeding plumage it usually has a thin black line separating the chestnut breast band from the white throat; bill of greater sand plover is larger and heavier than that of lesser. Adult banded dotterels have a thin black band on the lower neck and a chestnut band across the upper breast, these being separated by a band of white. Juvenile banded dotterels are yellowish on the face and nape, in contrast to the cleaner white of the two sand plovers.

Detailed information on the complexities of separating greater and lesser sand plovers is given by Hirschfeld et al. (2000).

One or two greater sand plovers are recorded in New Zealand most summers with records distributed from the Far North to Southland. The East Asian-Australasian Flyway population is estimated at about 79,000 birds.

Only small numbers migrate through the Yellow Sea, most move further to the West, through Southeast Asia and southern China. It appears that the population is declining, probably as a result of habitat loss and degradation.

The nest is a shallow scrape in the ground and usually 3 eggs are laid.

Greater sand plovers feed on a variety of intertidal invertebrates during the non-breeding season, particularly crabs.

A large plover which is grey-brown above and white below with a dark partial breast band in non-breeding plumage. The mainly brown face has pale eyebrow stripes, the underwing is mainly white, the upperwing has a prominent white wingbar, the long dark bill is heavy with a bulbous tip, and the long legs are greenish-brown.

Calls from a small group in a swamp