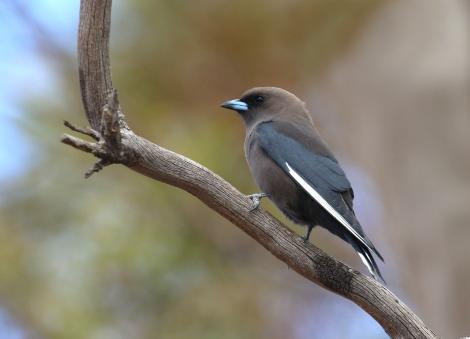 Woodswallows are a group of 11 medium-sized aerial insectivores, six of which are found in Australia (four of them endemic). Two of the Australian species also occur in south-east Asia and Melanesia. The remaining species range from south-east Asia into southern China, and across to Indian and Sri Lanka. They are often put in the same family as butcherbirds, currawongs and the Australian magpie. The dusky woodswallow is darker than most other woodswallows, and has a diagnostic white stripe on the leading edge of the upper-wing.

The dusky woodswallow is a dark starling-sized bird with a robust pale-blue bill, a longish tail, and a prominent white stripe on the leading edge of the folded wing. Like other woodswallows, it often waits on a prominent perch, taking flight to catch insects on the wing or on the ground, before returning to the perch.

The sexes are alike, having dark smoky-brown head and body plumage, dark blue-grey upper-wings with a prominent white stripe on the outer upper wing, whitish underwings and a black tail with prominent white outer corners. The blue-grey bill has a dark tip, and the eye is dark brown, with a small blackish mask between the eye and bill. Juveniles are dark grey-brown streaked with buff and fawn, but still have the white leading edge to the outer wing.

Similar species: unlikely to be confused with any other species known from New Zealand. The otherwise similar-looking little woodswallow (Artamus minor) and black-faced woodswallow (A. cinereus) [neither of which have been recorded from New Zealand] both lack the white leading edge to the outer upper-wing, which is obvious on dusky woodswallows both in flight and when perched.

The dusky woodswallow is endemic to Australia, where it is widespread and common in open forest, woodlands, coastal scrub and wooded farmland from the Atherton Tableland, Queensland to Eyre Peninsula in South Australia. It is a common summer migrant to Tasmania. A second population occurs in south-west Western Australia.

A single bird photographed near Halfmoon Bay on Stewart Island in late September 2014 is the sole accepted New Zealand record. There was an unconfirmed sighting of two dusky woodswallows hawking insects over Ho Ho Bay, Snares Islands, in October 1983. The timing of these sightings coincides with the southward migration of adult dusky woodswallows across Bass Strait to Tasmania.

Dusky woodswallows are gregarious and largely migratory in the south-east of their range. They are noisy and conspicuous, usually occurring in pairs or small groups, but can form larger flocks in association with other woodswallow species. They often roost in flocks of 20 or more, and may cluster together in cold weather. When perched, they often fan and twist the tail, especially just after landing or if agitated.

Dusky woodswallows often breed in co-operative groups, and nests may be in close proximity. The nest, which is placed in a tree fork or stump, or in a fence post, is an untidy bowl of twigs, grass and roots, lined with fine grass. Both parents build the nest, incubate the 3-4 eggs, and feed the young.

Although over 2500 dusky woodswallows have been banded in Australia, banding has failed to reveal migratory movements, with all recoveries being within 10 km of the banding location. The oldest bird recorded was banded as an adult and recaptured 8 years later. Like other woodswallows, dusky woodswallows have powder-down feathers, the tips of which disintegrate to form a fine powder that the birds use when grooming.

Dusky woodswallows feed mostly on insects, usually taken on the wing by birds sallying out from a perch to intercept flying insects in rapid, graceful flight. Invertebrates are also taken from the ground, and they occasionally feed on nectar and fruit.