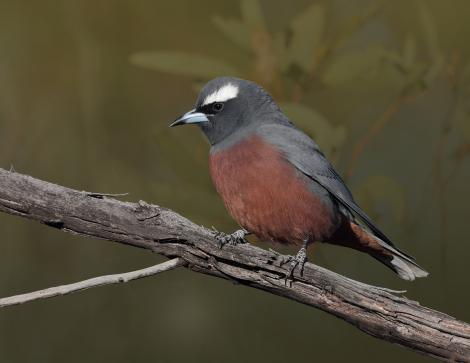 Woodswallows are a group of 11 medium-sized aerial insectivores, of which six occur in Australia, four of them endemic. Two of the Australian species also occur in south-east Asia and Melanesia. The other five non-Australian species range from south-east Asia to southern China and across to Indian and Sri Lanka. Woodswallows are sufficiently closely related to Australian magpie, currawongs and butcherbirds to be placed by some scientists in the same family. Two of the Australian species – white-browed woodswallow and masked woodswallow – have been recorded in New Zealand as vagrants. Both are highly nomadic in Australia and often co-occur in mixed flocks.

The white-browed woodswallow is a sexually dimorphic species, with the male being slightly larger and more brightly coloured than the female. Males have dark grey upperparts, upper breast and chin. The crown, face and throat are darker grey, broken only by a distinct white stripe above the eye. The lower breast, belly and undertail coverts are brick red. The tail is grey above and paler below, with distinct white tips, broader and more prominent towards the outer tail. The wings are grey above and off-white below. Females are generally duller and paler than males, with bleached salmon red underparts, brownish grey upperparts, and a less prominent white eyebrow. Adults of both sexes have dark brown irises, and a pale blue-grey bill with black tip. Juveniles and immature birds are duller and browner than adults, streaked below, and speckled above, an effect created by the pale edges of the back feathers and wing coverts. As with other woodswallows, white-browed woodswallows have powder-down feathers, the tips of which crumble to a fine powder that the birds use when grooming.

Voice: the main call is a rapid chz chz chz cha, lasting less than a second; birds in a flock communicate with a soft chatter of brief sparrow-like calls and whistles.

Similar species: male chaffinch, which also has reddish-brown underparts, is smaller and has many other distinguishing features (white wing bars, reddish brown face and grey crown without a distinct white eyebrow, a small conical bill, and quite different shape and behaviour).

The white-browed woodswallow occurs in inland eastern and south-central Australia. It is most common within the Murray-Darling Basin, inhabiting eucalypt forests and woodlands, mallee shrubland, and spinifex-dominated rangelands, as well as farmlands, orchards and sometimes towns. Outside the breeding season, the birds are highly nomadic, ranging across inland Australia, following rain-producing fronts. Some move northwards in winter to the Northern Territory and central Queensland, returning southwards in spring to nest. In drought years, birds often reach coastal south-east Australia. Vagrants ending up in New Zealand may have been birds that overshot the coast and were then carried eastwards by westerly winds.

Four white-browed woodswallows were present in Naseby Forest, Central Otago, December 1971 to July 1973, in the company of a pair of masked woodswallows (which bred and reared two chicks during this period). Three of the white-browed woodswallows are thought to have succumbed during a series of cold spells experienced in July 1973; the fourth died earlier and that specimen is in the Otago Museum. Another bird was recorded at Miranda, Firth of Thames, in September 1991, following the passage of a series of fronts from Australia. One other record, from central Waikato in February 2002, was never submitted for verification.

White-browed woodswallows feed largely on flying insects, which they pursue by hawking or sallying from exposed perches, but they will also pounce on insects visible on the ground. Like other woodswallows, they have brush-tipped tongues, a feature that helps them feed on nectar.

A small-medium songbird species with a dark-tipped pointed grey bill in which adult males are dark bluish-grey above a white stripe over the eye, white-tipped dark tail, blue-black throat, and dark chestnut underparts, while females are duller with paler colouring. Juveniles are similar with more mottling.