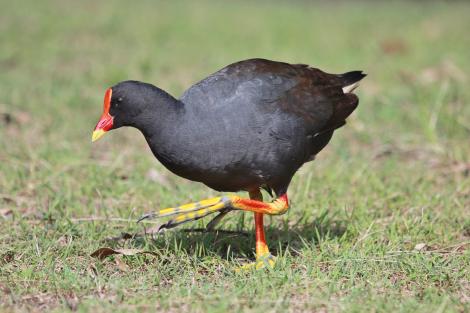 The dusky moorhen is a member of the rail family that is common in Australia but a rare vagrant in New Zealand. Reminiscent of an under-sized pukeko with a yellow tip to its bill, they take to the water more readily than pukeko. Preferred habitats include well-vegetated freshwater wetlands including flowing streams, large lakes, reservoirs and urban ponds. Two other ‘gallinules’ – the black-tailed native-hen and the common moorhen – have also been recorded from New Zealand as rare vagrants.

The dusky moorhen is a medium-sized dark grey-black waterbird with a white undertail. It is slightly smaller than a pukeko, slate grey below and browner on the back. The central undertail coverts are dark, separating the white undertail into two patches if seen well. The bill is red with a yellow tip, with a red frontal shield extending on to the forehead. The eyes are olive-brown and the legs are red with green at the ‘knee’ joint. Young birds are duller and browner than adults, with a dark olive-green bill and face shield.

Voice: a variety of sharp sounds, including a loud sharp kurk or cark.

Similar species: pukeko is larger, more blue underneath, and more upright, with a sold red bill and larger, continuous white undertail. Australian coot has a white bill and frontal shield and dark undertail. Rare vagrant black-tailed native-hen has a green-and-orange bill, yellow eye, dark undertail, white spots on flanks, and red legs. The even rarer common moorhen is very similar but has white stripes on the flank and yellow legs.

The dusky moorhen are widespread in eastern and south-western Australia, and has recently established in Tasmania. They are also widespread in Indonesia, Borneo, Sulawesi and New Guinea. They are found in wetland habitats, including swamps, creeks, rivers and lagoon estuaries. Preferred habitats are those with floating vegetation such as reeds, rushes, grasses and waterlilies.

In the breeding season dusky moorhens form territorial breeding groups of 2-7 adults. In the non-breeding season birds gather together in loose flocks of up to 100 or more birds. Dusky moorhens foraging on the ground flick their tails vertically, revealing their conspicuous white undertail coverts. This behaviour increases when the birds are alarmed.

Dusky moorhens are omnivorous, consuming a wide variety of plants and small water creatures as well as carrion. No New Zealand data.

A medium-large dark-plumaged rail with a white undertail, red bill with a yellow tip, a red frontal shield and green-and-red legs. The absence of white on the flank, along with leg colour, separate the dusky moorhen from the otherwise similar common moorhen; young birds are browner and lack the red shield.