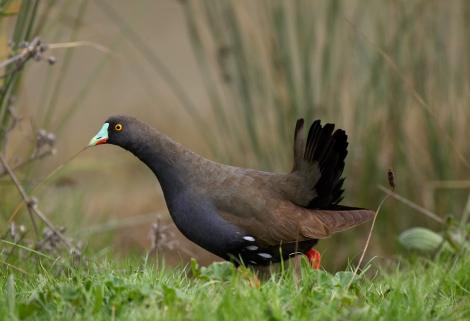 The black-tailed native-hen is a member of the rail family that is common in Australia but a rare vagrant in New Zealand. Reminiscent of a small pukeko with a green-and-orange bill, they are terrestrial birds which typically inhabit wetlands such as shallow lakes, swamps, pools, and river and creek margins. Two other ‘gallinules’ – the dusky moorhen and the common moorhen – have also been recorded from New Zealand as rare vagrants.

The black-tailed native-hen is a medium-sized, dark fleet-footed rail with thickset appearance and erect narrow black tail that is constantly flicked. About half the size of a pukeko, the black-tailed native-hen is olive-brown above and slate-grey below, with prominent elongated white spots on the flanks. The upper bill and frontal shield are green, and the lower bill is orange. The eyes are yellow and the legs are coral pink. Juveniles are similar to adults, but slightly duller. Their upright stance, erect tails and social behaviour are reminiscent of domestic hens.

Similar species: the black-tailed native-hen is most similar to the two moorhen species which may also occur as rare vagrants in New Zealand. Both the dusky and common moorhens are larger, less upright, more likely to swim, and have a red frontal shield and bill with a yellow tip, and white outer tail feathers. Note that the common moorhen has white feathers on the flanks similar to those on black-tailed native-hens.

Black-tailed native-hens are widespread throughout mainland Australia, and are vagrant to Tasmania and New Zealand. They are opportunistic, frequenting permanent or ephemeral wetlands including shallow lakes, swamps, ponds, and floodplains and margins of rivers and streams.

Black-tailed native-hens are usually gregarious, but can also be solitary. They occasionally gather in very large numbers, with irruptions of more than 10,000 birds recorded. They feed on open ground near wetlands or at the edge of water, often running, then stopping to catch any insects they disturb. Black-tailed native-hen can breed at any time of the year if conditions are suitable.

Black-tailed native-hens consume seeds, plant material and insects. They can cause considerable damage to crops. No New Zealand data.

A medium-sized dark thickset rail that is olive-brown above and slate-grey below with prominent elongated white spots on the flanks and an erect narrow black tail that is constantly flicked. The upper bill and frontal shield are pale green, the lower bill orange, the eyes yellow and the legs coral pink.