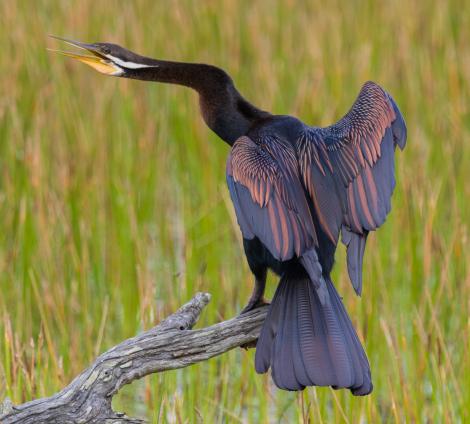 Darters are large aquatic birds that inhabit calm waters. Their long, thin pointed bill, long slim neck, long wedge-shaped tail, and long broad wings make them look like a flying cross when in soaring flight. In Australia, darters disperse widely after breeding, using hot air thermals to glide and soar, and so it is unusual that there are only four records from New Zealand. However, it is likely that others are overlooked because of their similarity to the various shag and cormorant species that occur in the same lakes, coastal lagoons and estuaries.

Darters are large and slim, with a very long thin neck with a distinctive kink about half way down, long pointed straight yellow bill, and a very long tail. A white stripe extends from behind the eyes to about halfway down each side of the neck, and there are prominent creamy streaks on the upper wings. Males are otherwise brown-black, with a reddish patch on the middle of the throat; females and immatures are paler, with grey-brown upperparts and whitish underparts. The long, snake-like kinked neck, long straight, pointed bill (lacking a terminal hook) and slim appearance are key features that separate this species from the various shag species that occupy the same habitats.

Similar species: black shag is markedly bulkier, slightly taller, and has all-black rather than pink and yellow legs and feet, and a hooked bill.

Darters breed from Africa and the Middle East, through India and South East Asia to Australia. In Australia most breeding colonies are in the Murray-Darling catchment and along the eastern seaboard. After breeding they disperse widely. They are most commonly found on inland waters and sheltered coastal waters; they occasionally occur at sea, near the shore, in calm conditions. Vagrant to New Zealand, there are only four records, all from freshwater or coastal waters.

There are four confirmed New Zealand records of darters. The fresh skin of an adult female was found nailed to the wall of a shed near Hokitika in January 1874. Over 100 years passed before the next records with sightings of single birds at Lake Waiharara, near Kaitaia, in December 1992; Lake Daniels, Nelson, in November 2003; and Wellington Harbour in December 2003.

Darters usually forage alone, and nest solitarily or in small groups, sometimes with shags/cormorants. They usually roosts in trees and bushes over water, rarely on the ground or in reeds. Darters require smooth, open water for feeding, and riparian trees or posts for perching and to dry their wings.

Darters feed by swimming underwater, then darting their necks out to impale fish on their needle-like bills. On surfacing, they toss the fish into the air and catch it head first before swallowing. They also eats insects caught above the water. No New Zealand data.

A large, slim, dark waterbird that resembles a shag but with a very long thin kinked neck, a long pointed yellow bill, and a very long tail. A thin white stripe extends from the eyes halfway down each side of the neck.