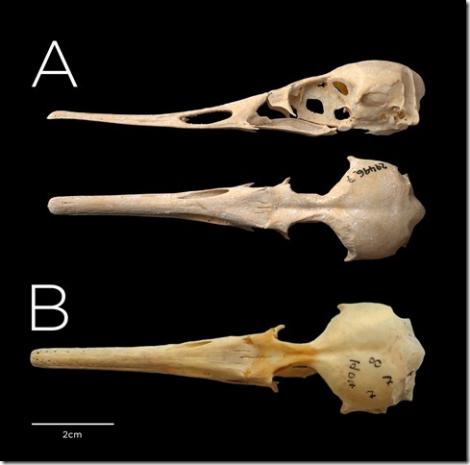 The Chatham Island merganser became extinct in prehistoric times, and so no records of live birds exist. A few bones have been found in human food middens, and hunting for food by people is the most likely cause of the species’ demise.

Abundant remains of adult Chatham Island mergansers, and some chick and egg remains, were retrieved from a small cave on the shoreline of Te Whanga Lagoon. This indicates that the cave was a popular nesting site for the species. This might have been expected because other merganser species worldwide are hole-nesters and females carry out all incubation duties.

Other than its nesting behaviour, almost nothing is known of the Chatham Island merganser’s behaviour or ecology. The extensive salt glands on the skull of the species suggest that it spent a considerable time in coastal waters, particularly perhaps the saline waters of Te Whanga Lagoon. All mergansers have tooth-like serrations on their bill margins, used for catching fish.

Mergansers are primarily fish eaters, which they pursue and then catch with their serrated bill-margins.  Nothing specific is known about the food of the Chatham Island species but presumably the diverse freshwater fish fauna would have provided abundant fare. It is likely to have fed on a broad range of fishes, and perhaps aquatic invertebrates, in the large brackish Te Whanga Lagoon and possibly in shallow coastal waters as well.