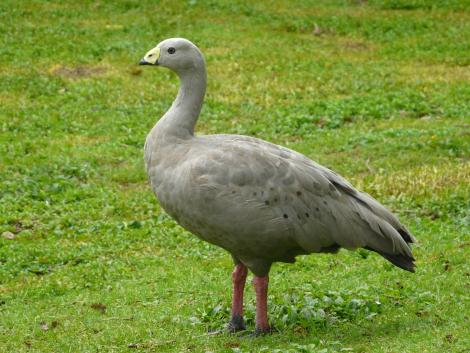 The Cape Barren goose is endemic to Australia and was introduced into New Zealand unsuccessfully at least three times between 1869 and 1874. Six birds released in 1914-15 at Lakes Hawea and Wanaka resulted in a small breeding population that persisted until 1946. Birds recorded elsewhere during or soon after that – Lake Thompson (1934), Loch Maree (March 1947) and Lake Hankinson (June 1947) – may have come from this population. This species does not normally fly long distances in Australia, and it is unknown if any New Zealand birds are true vagrants from across the Tasman. Most recent records are almost certainly released or escaped captive birds.

The Cape Barren goose is a large, grey goose with a comparatively small head and a short black bill largely obscured by a prominent lime-yellow cere that surrounds the large nares. The forehead and crown are whiter than the rest of the grey head and neck, this is more apparent in adult birds. Both the upper- and under-parts are grey with a slight brown wash. Paler margins to the breast and back feathers create a faint scaly effect. The tail and both sets of tail coverts are black. The upper wing coverts each have a dark grey spot near their tips, showing up as three lines of small spots on the closed wing. Spots on the scapulars are larger and browner; these are smaller in immature birds. The flight feathers are grey with black tips, the extent of which increases towards the outer primaries where it covers the distal half of the feathers. The iris is honey coloured, and the legs are deep pink with black feet, giving the impression that the bird has been walking in mud. Goslings are strongly patterned black and white, including having a black mask.

Voice: a rasping two-note call that rises and falls rhythmically, often given by birds when flying. Also has a deep, double-note, pig-like grunt, hence its colloquial name ‘pig goose’.

Since 1988, a small population of liberated birds has become established at St Anne’s Lagoon / Mata Kopae in North Canterbury, where up to 18 birds have been recorded together. Individual and pairs of birds are also intermittently recorded around Christchurch (Lake Ellesmere, Travis wetland, Waipara and Amberley lagoons, wetlands and pastures along the Cam River), south to Timaru; these birds are probably escapees from Peacock Springs wildlife park, which has a captive population. Some of these feral birds have been recorded breeding. A small population in the South Kaipara Harbour region, north of Helensville, probably also originates from liberated birds, as has a pair near Hokitika. Incidental records (Takaka, 1998; Wanganui and Waikanae, 1987-1988; Waikanae-Paraparaumu, 2001-2002; Owaka, 2004; Kaikoura, 2005, 2009; near Kaitaia, 2006; Cape Reinga, 2009; Mowhanau Beach, 2010, 2012; Catlins River, 2011; and Lake Hood, near Ashburton, 2011) are also most likely to be escapees from private waterfowl collections.

Cape Barren geese are almost wholly terrestrial, inhabiting open grassland, including planted pastures, on the fringes of wetlands; they avoid scrub-encroached grasslands. Some birds also visit the coast, including a pair seen flying from Stephenson Island (Mahinepua) in early 2011, and 7 birds seen on a headland there in late 2012. This raises the possibility of a small breeding population becoming established in a similar environment to that in which they breed in Australia: small offshore islets in the Bass Strait, and the Recherche Archipelago, Western Australia.

The size of the New Zealand Cape Barren goose population is not known but probably small. Maximum numbers reported from a site are 18 (St Anne’s Lagoon / Mata Kopae), but three-quarters of all sightings are of individuals or pairs.

Geese generally can be destructive in newly sown croplands, and their droppings can foul pastures, but the extent of impact depends on the number of birds. Given this species’ small population, patchy distribution and apparently limited capacity to establish and spread, it is unlikely to be causing any significant economic or ecological impacts.

Monogamous; pairs generally mate for life. Only a few breeding records are known from New Zealand, all of pairs with young goslings. Nesting takes place in late winter, with goslings being seen in early spring. In Australia, the nests are placed beneath bushes or in large grass tussocks, always in positions where the birds have a good view. Nests are built-up grass-lined hollows filled with grey down that covers the eggs when the female leaves the nest. Only the female incubates, but both parents brood small goslings.

Mainly terrestrial, in Australia grazing on short grassland, pastures, and coastal fringes. Calls and threat displays similar to those of other geese. In this, birds lift their folded wings repeatedly, stretching out and pumping their necks vigorously, the intensity rising with increasing levels of aggression. On attack, a bird either rushes forward with the head held out and low, or runs upright with wings spread. After mating, a pair performs a ‘triumph ceremony’, facing each other while raising and lowering their heads on outstretched necks, calling loudly. The same display is given after aggressive encounters with other birds.

Cape Barren geese graze green grass, legumes and other herbs. They also strip seed heads, and in captivity will feed on grain scattered on the ground.

A large grey goose with a small head, a stubby black bill, a large lime-yellow cere, honey-coloured irises and pink legs. The pale grey plumage on the body and upper wings has brownish or blackish markings giving a scaly effect, and the wing tips and tail are black.